From the mid 8th Century BC, the Greeks and Phoenicians began establishing colonies in the central and western Mediterranean. The Phoenicians colonised much of north Africa, along with parts of Spain and Sardinia, whilst much of southern Italy became known as "Magna Graecia." Trade was part of the motivation for this expansion, and many local Italian, African and Spanish communities responded with enthusiasm. 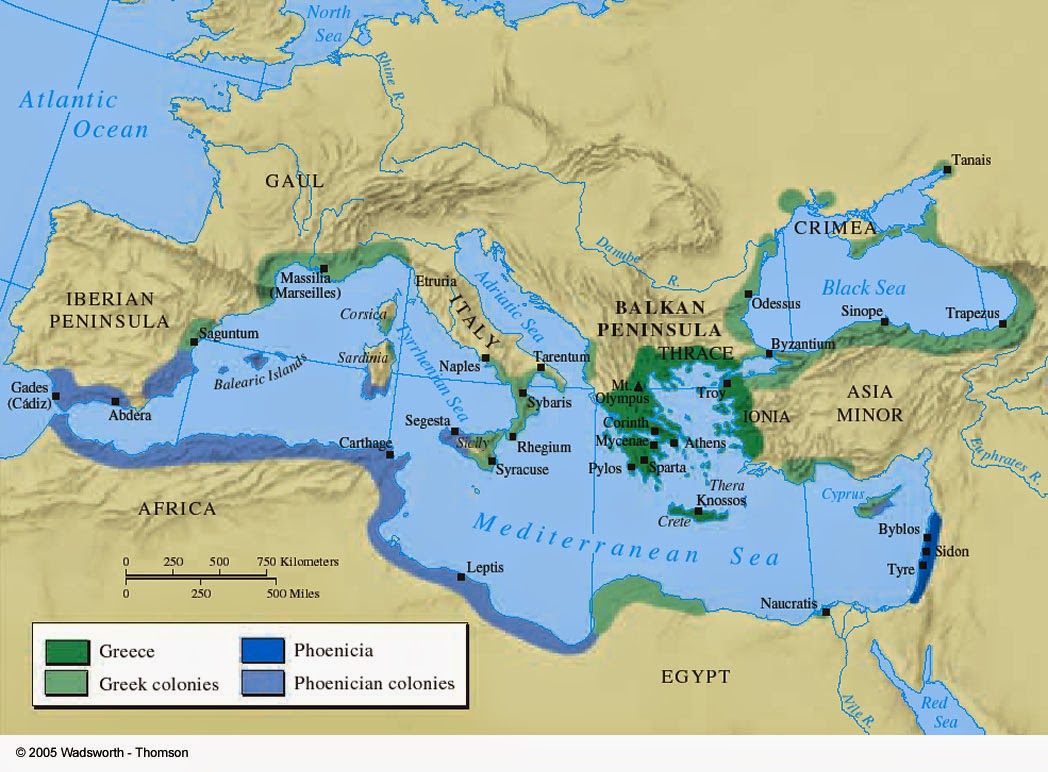 Greek and Phoenician colonies in the Mediterranean (image is in the Public Domain).

As well as imported goods, the colonists brought with them knowledge of new technologies, including the use of iron; new mythologies and religious beliefs; and written language, which were variously adopted and adapted by indigenous communities. New literate civilisations emerged around the Mediterranean coast: the Etruscans; the Carthaginians; the Iberians. By comparison with these, the civilisation of Latium, the area around Rome, is barely visible in the archaeological record, yet it would go on, in time, to conquer much of the known world. 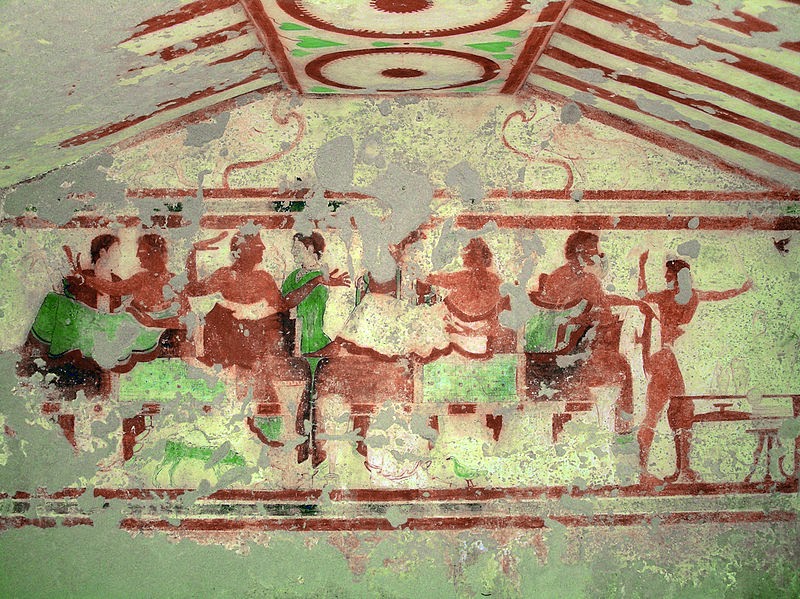 Etruscan fresco from a tomb at Tarquinia. The scene looks like a Greek symposium, and is probably inspired by images on Greek vases, but look closer, and there are important differences: women, for example, are participating alongside men, which was never the case in Greek symposia. Photo: Waugsberg (licensed under GNU).

Later generations of Romans would go on to insist that their civilisation was founded by Trojan refugees, but there is a problem here, which the Romans themselves understood, at least in part: the earliest historical and archaeological evidence for sustained contact between Italy and the eastern Mediterranean dates to the 8th Century BC; the Trojan War, if it happened at all, is likely to have been in the 12th Century BC.

Coin minted by Julius Caesar, featuring, on one side, an image of the goddess, Venus (his supposed divine ancestress) and, on the other, Aeneas escaping from Troy with his father, Anchises, on his back. Photo: louisonze (reproduced with permission).

Ursula K. Le Guin gets around this problem by following Virgil's Aeneid, just as Margaret Atwood took Homer's Odyssey as the basis for her Penelopiad. Le Guin consciously sets her novel in " ... Virgil's semi-mythological, non-historical landscape, defined by a poet, not by the patient uncertainties of archaeologists." Like Atwood, she builds her story around a character who plays only a minor role in the poem itself (Lavinia, the daughter of King Latinus, who marries Aeneas and bears him the son whose descendants will go on to found Rome), but there the similarity ends, for whilst Atwood brings her characters into our world, Le Guin is determined to immerse us in the world of her characters. 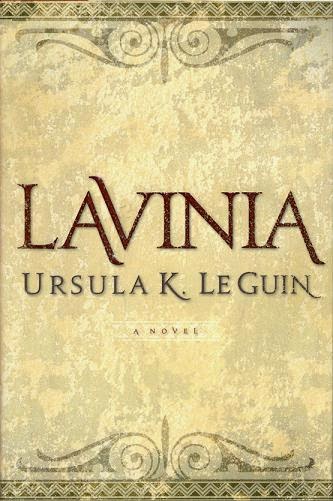 Her Lavinia talks directly, both to the poet who will later immortalise her (their spirits meet in a sacred grove), and to us. There is a degree of unreliable narration involved: Lavinia tells Virgil that he has got some of the details wrong, but he is, by this stage, already dying, and is too ill to revise his manuscript. He, in turn, tells her some uncomfortable truths about her future, which she can do nothing to change.

"I went to the salt-beds by the mouth of the river, in the May of my nineteenth year, to get salt for the sacred meal ... we slept under the seawind ... I woke at the first beginning of light ... on the dim sea I saw ships - a line of great, black ships, coming up from the south and wheeling and heading in to the river mouth. On each side of each ship a long rank of oars lifted and beat like the beat of wings in the twilight ... The faces of the oarsmen were shadowed but a man stood up against the sky on the high stern of the ship, gazing ahead. His face is stern yet unguarded; he is looking ahead into the darkness, praying. I know who he is." 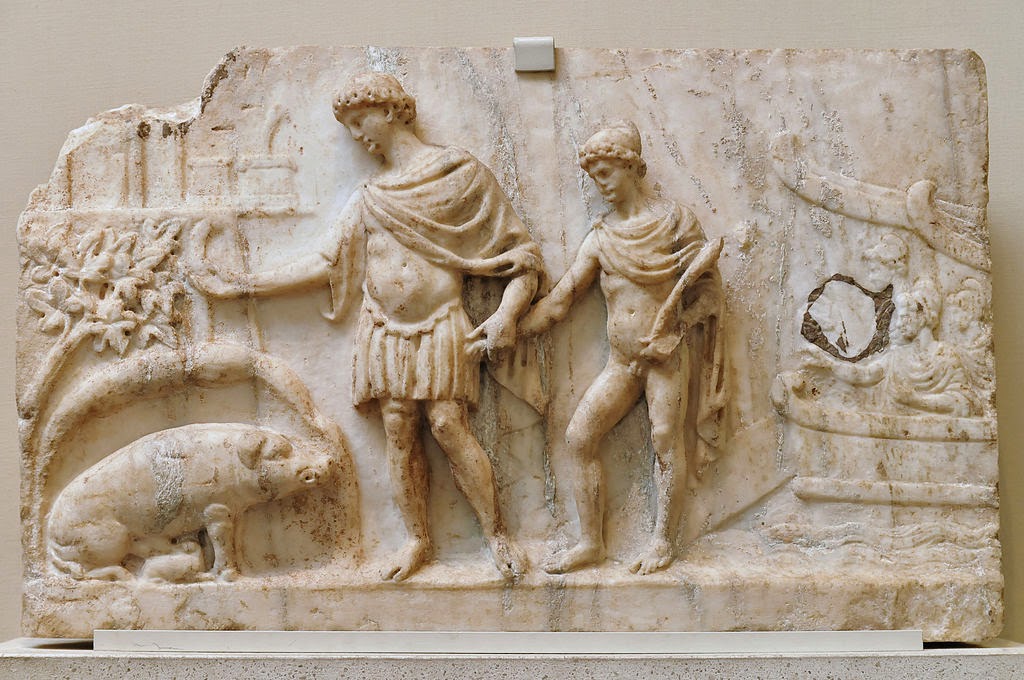 Sculpted relief of Aeneas and his son, Ascanius, setting arriving in Latium. Photo: Jastrow (image is in the Public Domain).

"No one was at the sacred place, but there had been recent sacrifices; fresh fleeces lay on the ground and a stack of unburned wood by the altar. I scattered salted meal on the altar and all about the enclosure and wished I could light a little fire, but I had brought none ... I became aware that a figure was standing within the enclosure, on the other side of the altar. For a moment I thought it was a tree. Then I saw it was a man. I sat up and said, 'Be welcome here.'"

Le Guin is better known as an author of fantasy and science fiction novels, and the world she creates is a largely fictive one, woven together from threads of Virgil's poetry, the archaeology of the 8th - 5th Centuries BC in Italy, and subsequent Roman traditions; but it is a believable world. The gods and goddesses do not intervene directly in the affairs of men, as they do in The Aeneid. It is a world that would have been familiar to any Roman, yet revealed, as no Roman would have thought to reveal it, from the perspective of a woman.