Forgotten dreams in a land of painted caves

Werner Herzog's latest documentary, The Cave of Forgotten Dreams, which premiered in the UK last night, provides a fascinating window on an archaeological site that few of us will ever have the chance to see "for real." The Chauvet Cave, in France's Ardeche Valley, contains humanity's oldest dated art-works, going back around 32,000 years but, to protect the art-works themselves, it is necessary that the cave remains closed to all but a handful of scholars. Herzog and his small team were given only 24 hours of access to the site, making this masterpiece (his first and, he has hinted, his last, in 3D) all the more remarkable.

Herzog's interest in prehistory is long-standing, but has not always been obvious. In his short autobiographical film, Portrait Werner Herzog (1986) he did say that the great project of moving a ship over a hill in Fitzcarraldo (1982) was inspired by his fascination with the prehistoric transportation of large stones.

Here he gives full expression to this life-time interest, but he deliberately eschews interpretation, allowing the art to speak for itself. The art of the cave walls, together with the footprints left by the painters and the charcoal from the torches with which they lit their way, constitute what Herzog poetically describes as "frozen fragments of a moment in time."

Except, of course, that there is not one moment, but a mosaic or palimpset of many different ones. In some cases, the paintings begun by the artists of one generation have been completed, or added to, by artists up to five thousand years later (roughly the same time period as separates us from the builders of Stonehenge).

A woolly rhinoceros painted on a cave wall appears to be charging, its horn depicted several times in a manner reminiscent of Eadweard Muybridge's photographic sequences of galloping horses. On a stalactite, a being with the head of a bull and the body of a man, like a Picasso minotaur, appears to embrace a naked woman. It is easy to make comparisons with better known sites, such as Lascaux in the Dordogne, yet most of the paintings at Lascaux date to around 17,300 years ago, making its artists almost equidistant in time between Picasso and the painter of the Chauvet "minotaur."

On the floor of the cave, the footprint of a boy sits alongside that of a wolf. Was the wolf pursuing the boy, Herzog asks, or did they enter the cave together as "friends," or were they in the cave at entirely different times? "We will never know," he insists.

By coincidence, next week will see the launch of Jean M. Auel's novel, The Land of Painted Caves (Crown), the final installment in her six-part narrative of one woman, Ayla, and her epic journey from her birthplace near the Black Sea to the painted caves of the Dordogne, around 25,000 years ago. Auel's journey as an author (beginning with The Clan of the Cave Bear in 1980) has, if anything, taken longer than her character's physical journey through the landscape and it must have felt, at times, as though she was walking on shifting sands.

If Auel were planning the storyline today, knowing what we now know, she might well have chosen to conclude Ayla's journey in the Ardeche rather than the Dordogne, and specifically at the Chauvet Cave where, not only do the paintings better fit her chronology but, in an uncanny echo of her first book, the skull of a cave bear seems to have been placed deliberately on a rock, "somewhat like an altar," Herzog helpfully suggests.

In his response to questions at last night's premiere, Herzog emphasised the similarities, at least in his work, between documentary and drama. Clearly he is a master of both, just as Michelangelo was a master of both the "frozen moment" of sculpture and the narrative drama of painting, but different genres make different demands of both the artist and the viewer or reader.

Faced with the footprints of the boy and the wolf, the novelist or dramatist, unlike the documentary maker or the archaeologist, cannot simply accept the real ambiguity of the evidence at face value. The wolf and the boy must be portrayed, perhaps even given names, and they must either stalk each other through the alien environment of the cave, or face it together as companions, as Ayla and her tamed wolf do. This leaves the historical novelist or dramatist uniquely vulnerable to changes of interpretation and understanding after they have committed words to print, and requires of the reader or viewer a "suspension of disbelief" when aspects of the narrative seem to conflict with the latest "scientific" interpretations. Authors, in their turn, must suffuse their work with general themes (in Auel's case, the communication between different "intelligences," reflected in Ayla's interactions both with Neanderthals, and with horses, wolves and lions) so as to give their work a relevance that goes beyond simply explaining evidence, or recreating a past society and its forgotten hopes and dreams.

Nevertheless, the similarities between these two artistic projects, arising from the same inspiration, is brought home in the final scene of Herzog's film, in which he reports on the escape of albino crocodiles from a nearby wildlife park into the Ardeche River. For these crocodiles, as for Ayla's ancestors (and ours), the landscape and environment are alien, yet they seem remarkably capable of adapting to it and, of course, they have their own perceptions of their new world (even, potentially, of us), an understanding that we can only guess at.
Posted by Mark Patton at 08:27 1 comment: 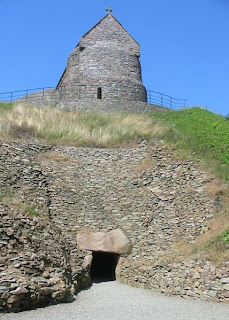 
At some time between 1515 and 1520, Richard Mabon, who had been Dean of the island since 1509, returned from a pilgrimage to the Holy Land. The chapel at La Hougue Bie had, by this stage, fallen into disrepair, and Mabon resolved to restore it. In fact, he divided the existing chapel into two with an internal wall, and removed most of the eastern wall, inserting a circular oratory, styled on the Holy Sepulchre in Jerusalem. It would later be claimed that he contrived dubious miracles here (candles that seemed to float in mid-air and a statue of the Virgin who raised her hand in benediction) in order to extract money from the credulous, but this may simply be propaganda put about as the Protestant Reformation swept over the island in the 1550's.
Of particular interest here is the small window that Mabon included as part of his oratory since, unlike the chapel itself, this is on the same alignment as the underlying megalithic passage. The crucial question is this: can we believe this alignment to be coincidental, or must we assume that Mabon somehow had knowledge of the megalithic structure? When I discussed this question some years ago with my colleague, the medievalist, Dr Warwick Rodwell, I was of the former opinion and he was of the latter. We agreed to differ, but now I am less sure.
It is possible that the contours of the mound as it existed in the 16th Century gave a clue as to the position of the passage entrance. It is also possible that Mabon, aware of the legend which held the mound to be the burial place of a murdered knight, conducted a small excavation of his own. Our excavations found no evidence for this, but any such evidence could have been destroyed by the excavation trench of the 1920's, which led to the discovery of the passage grave. The megalithic chamber of the passage grave showed no convincing evidence of having been disturbed since prehistory, but it is not necessary to assume that Mabon actually reached the chamber. The excavators of the 1920's found their way along the passage blocked by two broken capstones. We don't know when this damage occured, but if Mabon encountered it he may have been forced to abandon his quest. He may, nonetheless, have aligned his window on what he assumed to be the passage leading to the grave beneath the chapel.
It is hardly likely that Mabon independently decided to align his window towards the equinox. Apart from anything else, it is on the wrong alignment, given its elevation. In any case, the date would have had no real significance for him, his construction pre-dating by some decades the debates within the church that led, in 1582, to the adoption of the Gregorian Calendar.
The alignment could, of course, have been pure coincidence but, with each year that passes, this seems less likely to me.
Mark Patton's novels, Undreamed Shores, An Accidental King and Omphalos, are published by Crooked Cat Publications, and can be purchased from Amazon UK or Amazon USA.
Posted by Mark Patton at 01:40 No comments:

"The Raft and the Waterfall"

My short story, "The Raft and the Waterfall," is now available at www.etherbooks.com, giving a foretaste of my novel, Twilight of the Ancestors. It is listed under "New Authors," and downloadable for 59 pence.
Posted by Mark Patton at 10:18 No comments: