The Roman Empire brought together a wide and diverse range of cultures, each with its own distinctive traditions. All were obliged to pay taxes and obey Roman law but, beyond this, each city had its own local government, and a significant degree of autonomy. Most educated Romans were bilingual in Latin and Greek but, in cultural terms, there was always a distinction between the western empire (including Italy, Iberia, Gaul and Britain), where Latin was the language of the streets, and the eastern empire (including Greece, Anatolia, the middle east and Egypt) where Greek was the vernacular language. A phrase-book has even been preserved (The Colloquia of the Hermeneumata Pseudodositheana), intended to help people from one part of the empire conduct business in another.

Apuleius lived during the reigns of Hadrian and Antoninus Pius. He was a Roman citizen, but may never have visited Rome. He was born at Madauros (modern Mdaurusch, in Algeria), was educated at Carthage and Athens, and travelled extensively in Greece and North Africa. 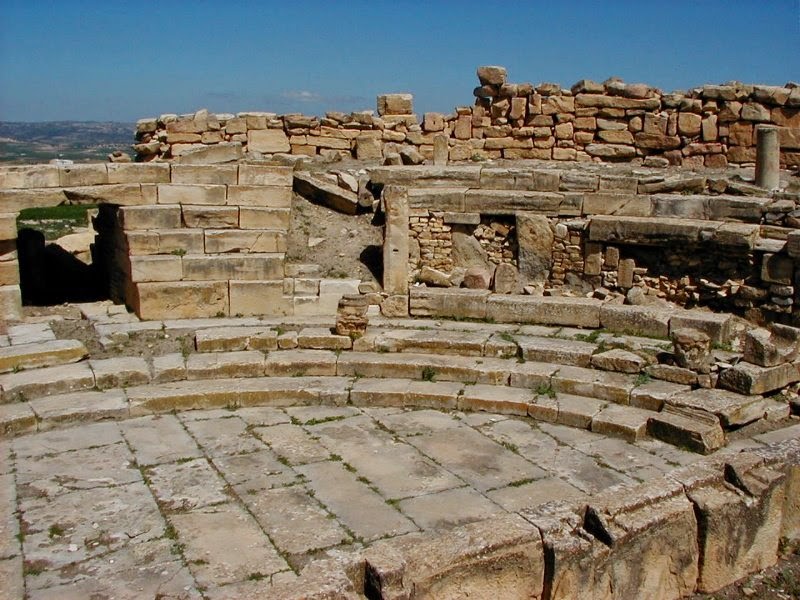 The odeon (theatre) of Madauros. Photo: Samir Bouali (image is in the Public Domain).

Unlike The Satyricon of Petronius, Apuleius's Latin novel, The Golden Ass, has been preserved in its entirety. It takes the reader on a journey through the backwaters of Roman Greece but, perhaps more importantly, it takes us on a journey through the imagination of  a provincial Roman of the 2nd Century AD. Physically, this journey begins in Thessaly and ends in the Corinthian port of Cenchreae. 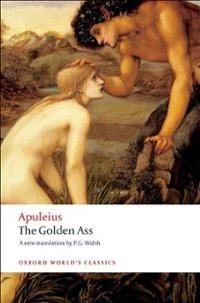 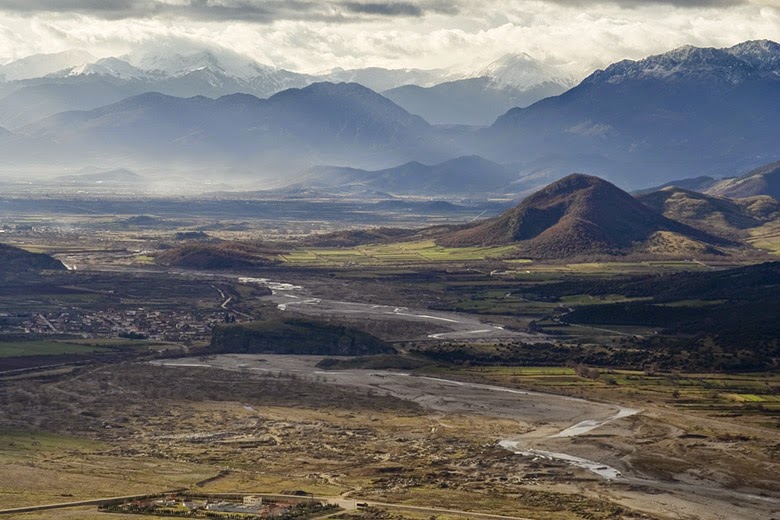 The Plain of Thessaly, where much of the novel is set. Photo: Evgeni Dinev (licensed under CCA).

The central character, Lucius (sometimes confused with the author), is driven by curiosity, and by his sexual appetites, into a number of tricky situations. He spies on a witch, and then steals some of her potion in the hope that he can transform himself, as she can, into a bird. The spell goes wrong and he is transformed, instead, into an ass. As an ass, he is much used and abused, until he finds redemption (and regains his human form) through devotion to the goddess Isis. Along the way, we learn a great deal about superstition and beliefs in witchcraft in the Roman Empire, about provincial life, and about the mystery cults that sprung up around the empire in the 2nd Century AD. 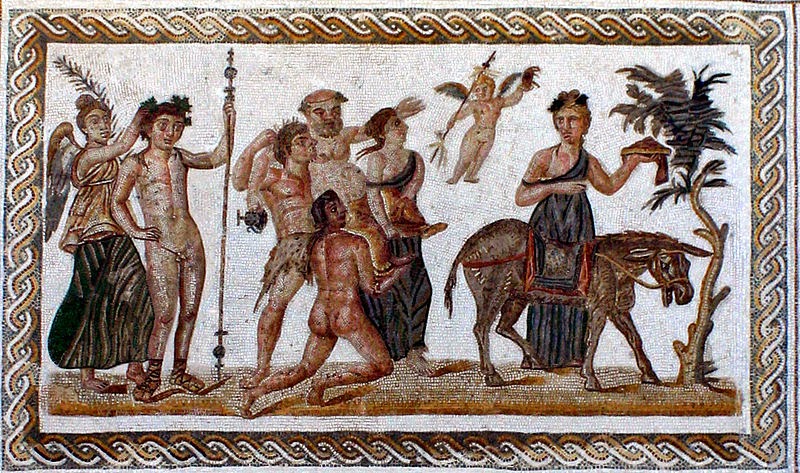 " ... just as darkness fell, Photis led me silently on tiptoe, and instructed me to witness what was happening there through a chink in the door. Pamphile first divested herself of all her clothing. She then opened a small casket and took from it several boxes. She removed the lid from one of these, and extracted ointment from it. This she rubbed for some time between her hands, and then smeared it all over herself from the tips of her toes to the crown of her head ... Her nose became curved and hard, and her nails became talons. In this way Pamphile became an owl ... "

" ... the doors were violently forced open, and a band of robbers burst into the whole house ... All the robbers were equipped with swords and torches which brightened the darkness, for the flames and weapons gleamed like the rising sun. They then attacked and split open with heavy axes the treasure store, which was situated in the middle of the house, and was secured with bars of considerable strength ... "

"'Here I am, Lucius, roused by your prayers. I am the mother of the world of nature, mistress of all the elements, first born in this realm of time ... The whole world worships this single godhead under a variety of shapes and liturgies and titles ... But the peoples on whom the rising sun-god shines with his first rays ... the Egyptians who flourish with their time-honoured learning - worship me with the liturgy that is my own, and call me by my true name, which is queen Isis ..." 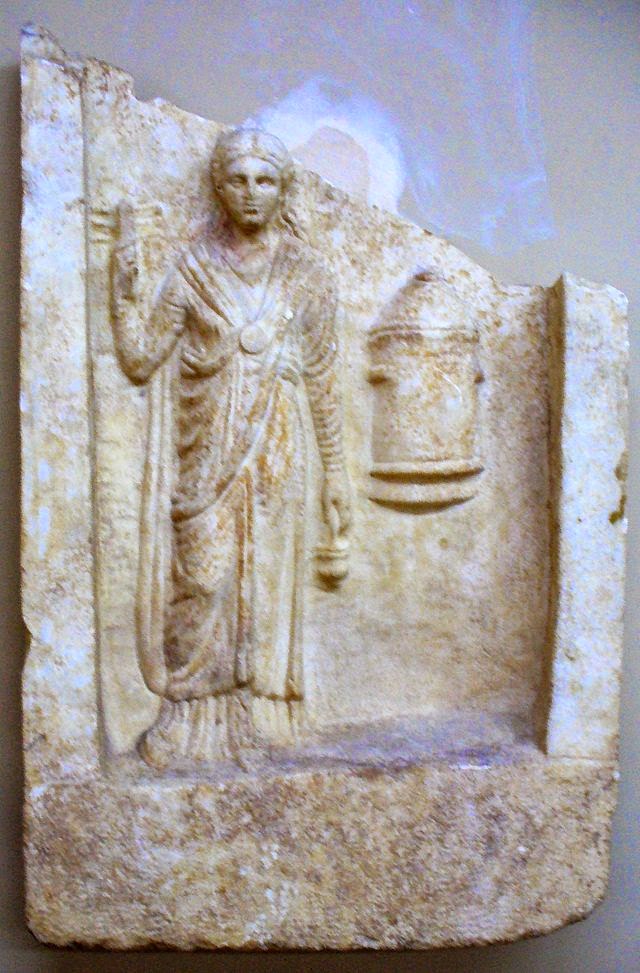 2nd Century Roman portrayal of the goddess Isis, Istanbul Archaeological Museum. Originally an Egyptian deity, the worship of Isis spread to all corners of the empire. There was even a temple in London dedicated to her. Photo: QuartierLatin1968 (licensed under GNU).

It is difficult to overstate the influence that The Golden Ass has had on later European traditions of literature and art. Printed Latin texts of the novel circulated widely in Europe from 1469, and a Spanish translation appeared in 1525. Some of the scenes in Don Quixote suggest that Cervantes was familiar with the text. The first English translation appeared in 1566, and its influence can be seen in several Shakespearean works, but most notably in A Midsummer Night's Dream, with the transformation of Bottom, like Lucius, into an ass. More generally, however, it is the foundation stone of European picaresque comedy, as surely as The Iliad and The Odyssey are the foundation stones of the European epic tradition.