A History of the World in 50 Novels. 11 "Memoirs of Hadrian," by Marguerite Yourcenar

The period between 96 AD and 180 AD is seen by many as the high point of Roman civilisation. The Renaissance courtier and political theorist, Nicolo Machiavelli, singled out the reigns of "five good emperors," Nerva, Trajan, Hadrian, Antoninus Pius and Marcus Aurelius as representative of this high point. The historian, Edward Gibbon, argued that, during this period, " ... the Roman Empire was governed by absolute power under the guidance of wisdom and virtue." 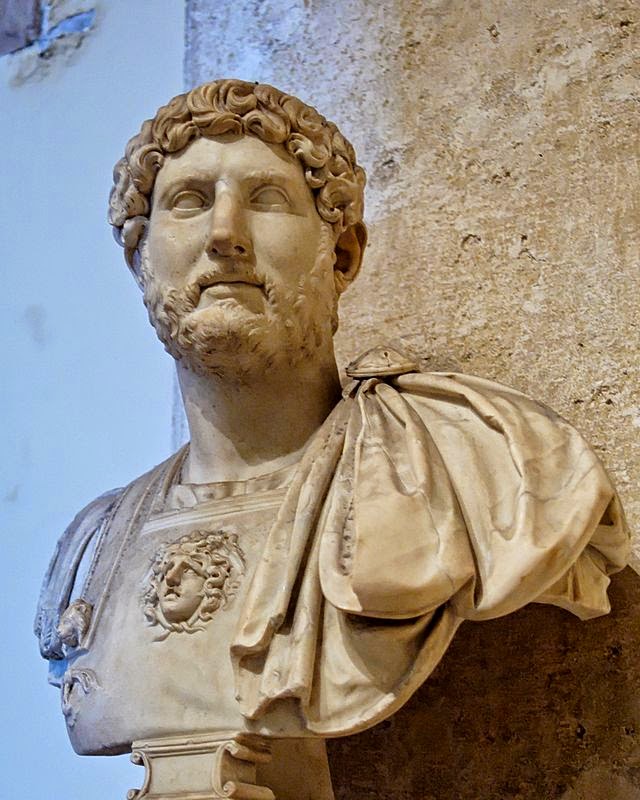 The Emperor Hadrian, bust in the Musei Capitolini, Rome. Photo: Marie-Lan Nguyen (image is in the Public Domain).

Hadrian was Emperor from 117 AD to 138 AD, and was significant, firstly, as the most widely travelled of Roman emperors, visiting virtually every part of the empire; and, secondly, as the emperor who put a stop to the ceaseless expansion of Roman rule (he withdrew Roman troops from Mesopotamia and Armenia, which had been annexed by his predecessor and adoptive father, Trajan), and turned his attention to the safeguarding of territories that were already Roman. Hadrian's wall, in northern England, is a visible reminder of this decision, as are the earthworks between the Rhine and the Danube, marking the empire's eastern frontier in Europe. 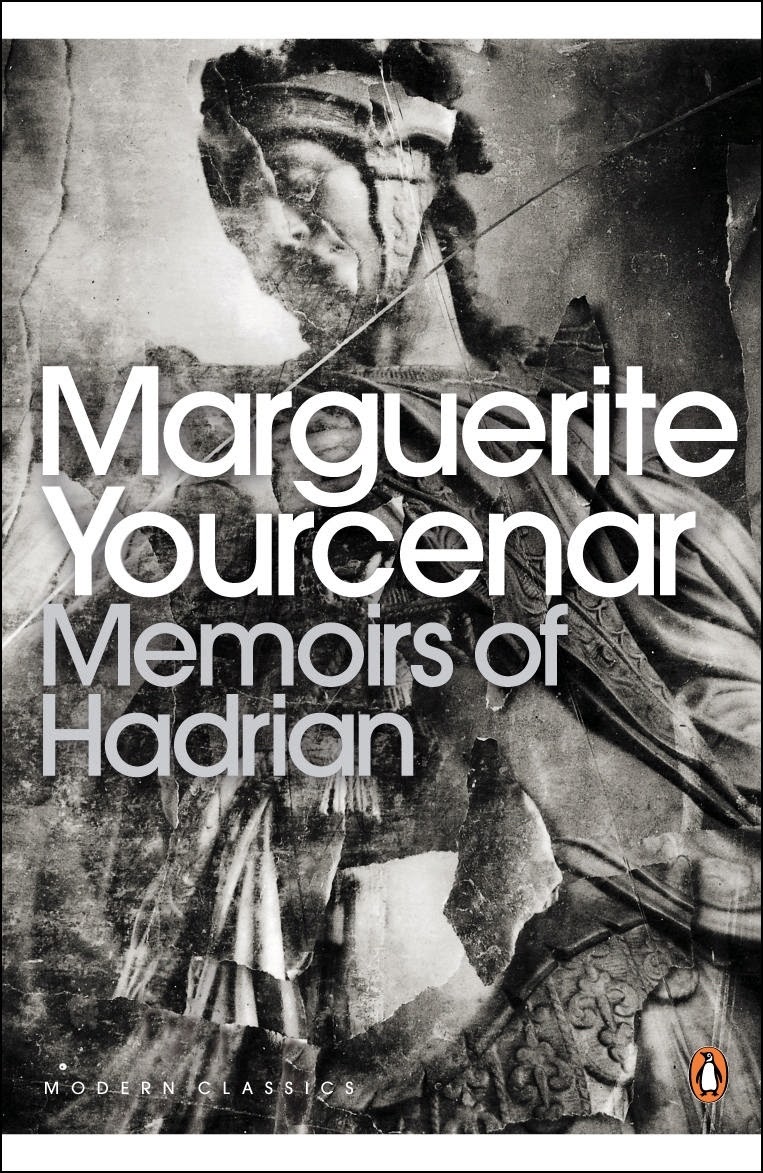 Fictionalised autobiographies of historical figures can almost be seen as a sub-genre of historical fiction (prominent examples include Robert Graves's I Claudius and Gore Vidal's Julian), but, to my mind Marguerite Yourcenar's Memoirs of Hadrian is the most remarkable of all. I have elsewhere described it as "the supreme triumph of historical viewpoint and voice in all of 20th Century fiction, and in any language," and I still don't think it has been surpassed.

It takes the form of an extended valedictory letter (and is, therefore, a novel without dialogue) written by Hadrian as he nears the end of his life, to his eventual successor, Marcus Aurelius. He reflects on his accession, his military victories, and his stewardship of the empire; meditates on the ecstasies and tragedies of his personal life; and provides insight into his character, philosophy and legacy.

"My dear Mark, Today I went to see my physician, Hermogenes, who has just returned to the villa from a rather long journey in Asia ... I took off my cloak and tunic and lay down on a couch. I spare you details which would be as disagreeable to you as to me ... the description of the body of a man who is growing old, and is about to die of a dropsical heart ... It is difficult to remain an emperor in presence of a physician, and difficult even to keep one's essential quality as a man ... This morning it occurred to me that my body, my faithful companion and friend, truer and better known to me than my own soul, may be, after all, a sly beast who will end by devouring his master ... " 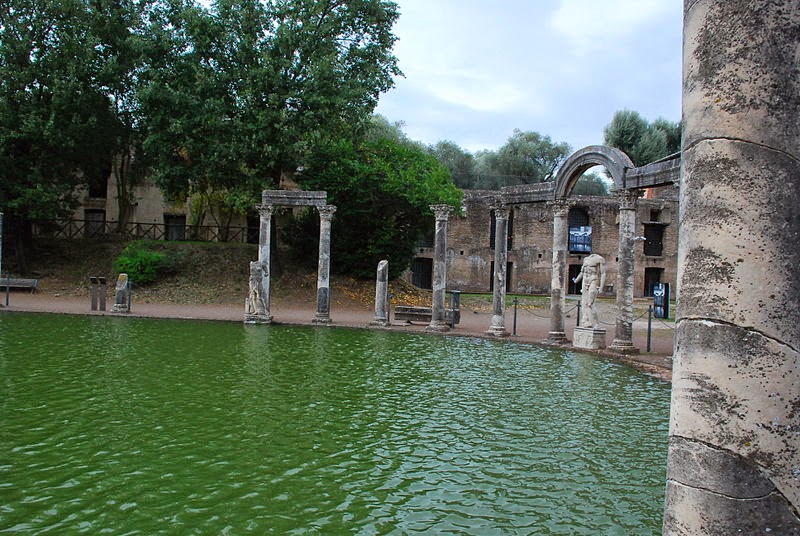 Hadrian's Villa at Tivoli, near Rome, from which we must imagine the emperor dictating his "letter" to a slave. Photo: Camelia Boban (licensed under GNU).

"I crossed to the Isle of Britain in a ship which was flat as a barge. More than once the wind threw us back toward the coast to which we had sailed: that difficult passage afforded some wonderfully vacant hours. Gigantic clouds rose out of a heavy sea roiled by sand and incessantly stirred in its bed ... Everything enchanted me in that rainy land: the shreds of mist on the hillsides, the lakes consecrated to nymphs wilder than hours, the melancholy, grey-eyed inhabitants ..." 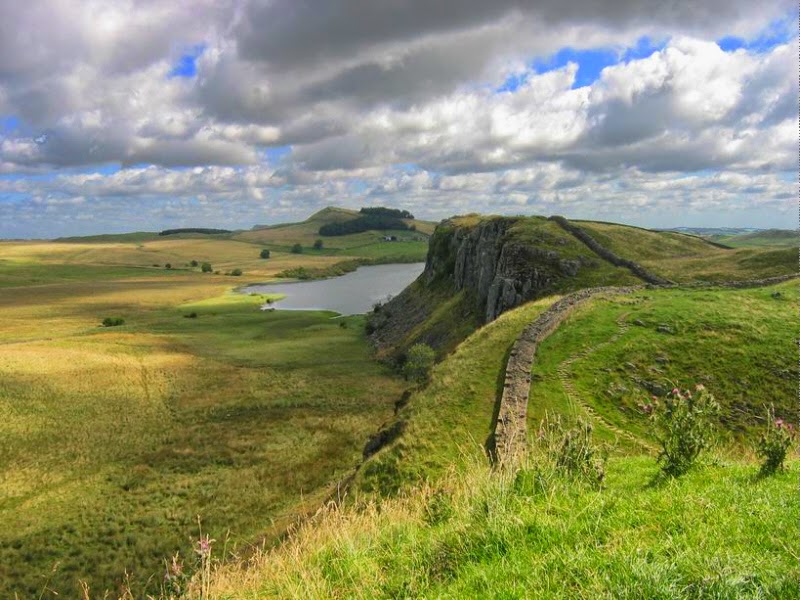 "Some days after we reached Thebes I learned that the Empress and her suite had gone twice to the base of the colossal statue of Memnon, hoping to hear the mysterious sound emitted from the stone at dawn, a well-known phenomenon which all travellers wish to witness. The prodigy had not occurred but, with superstitious awe, they imagined that it would take place if I were present, so I agreed to accompany the women the next day ... They landed us near the Colossus. A strip of dull rose extended along the east, still another day was beginning. The mysterious sound occurred three times, resembling the snap of a breaking bowstring. The inexhaustible Julia Balbilla produced, on the spot, a whole series of poems ..." 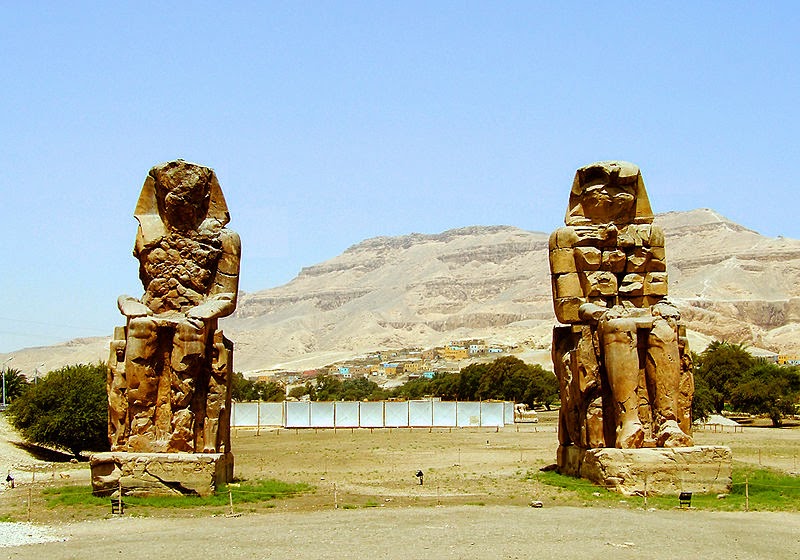 The Colossi of Memnon, in Egypt. Julia Balbilla's Greek poems are carved as graffiti on the leg of one of the statue, and can still be seen today, along with other comments inscribed by members of Hadrian's party. Photo: Roweromaniak (licensed under CCA).

Yourcenar began work on the book in 1924, but did not complete it until 1951. Some books, she later remarked, should not be attempted until the writer has turned forty.