The Story of London in 50 Novels: 12 - "The Quality of Mercy," by Barry Unsworth

Eighteenth Century London was the hub of a continually expanding network of global contacts. At its wharves and quays, ships arrived bearing lacquer-ware, porcelain, and tea from China; cotton fabrics from India; tobacco from North America; chocolate from Mexico; coffee and spices from Indonesia; and sugar from the Caribbean; smaller ships brought coal from the north-eastern ports of England, which was increasingly burned as a fuel in London, in preference to wood, the nation's forests having been depleted for the building of ships. The new commercial system was underpinned by innovations in banking, insurance, and corporate governance; but it was also underpinned by something more tangible, yet less visible to most Londoners: the trade in human beings.

Almost every spoonful of sugar consumed in London, and every tot of rum carried on the ships for the benefit of their crew-members, had been produced on plantations in colonies such as Jamaica or Barbados, on the basis of slave-labour. The slaves were Africans, who had been shipped to the Caribbean, often on British ships, with British captains; they were the property of British plantation owners; yet very few of them ever came to Britain itself. Although tens of thousands of ordinary Britons owned shares in companies that formed part of the supply chain, slavery itself was largely out of sight and out of mind.


From the mid-Eighteenth Century, movements emerged in Europe, committed to the abolition of slavery. Within Britain, these campaigns were often led by Evangelical Christians, and by religious dissenters, including Quakers and, later, Methodists. In 1777, a key ruling at the Old Bailey determined that a fugitive slave who had arrived in England, was a free man, since English law included no provision for the institution of slavery, and that, in the words of Lord Justice Mansfield,  "[slavery] is so odious that nothing can be suffered to support it, but positive law" (in other words, an Act of Parliament, which never actually came to pass).


With so many vested interests, however, the process of abolition was a slow and painful one. Slavery was formally abolished by the newly created French Republic in 1794, but this was revoked by Napoleon Bonaparte in 1802. In England, William Wilberforce's act of 1807 outlawed the Transatlantic Slave Trade, but British plantation owners continued to make use of slave labour until 1833.

Barry Unsworth's novel, The Quality of Mercy, is based around an imagined conflict (though closely based on historical circumstances), between a ship-owner, Erasmus Kemp, whose slave-ship has been taken over by its crew,and run aground in Florida; and the abolitionist, Frederick Ashton, who accuses Kemp of insurance fraud (in claiming for the value of slaves allegedly thrown overboard on the orders of the Captain), and seeks to demonstrate, in the courts, that, as human beings, the slaves had never been Ashton's lawful property. The situation is complicated by a love-interest between Kemp and Ashton's sister; and by the position of Sullivan, the ship's Irish fiddler, one of the few men who might actually know what happened on the ship, and who is, unbeknown to Kemp or Ashton, making his way on foot to a mining community in County Durham, with a message for the family of a murdered ship-mate. 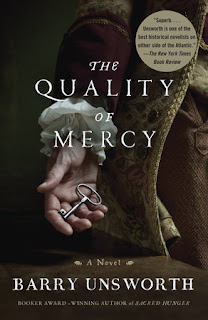 "On finding himself thus accidentally free, Sullivan's only thought was to get as far as he could from Newgate prison while it was still dark. Fiddle and bow slung over his shoulders, he set off northwards, keeping the river at his back. In Holborn he lost an hour, wandering in a maze of courts. Then an old washer-woman, waiting outside a door in the first light of day, set him right for Gray's Inn Lane and the northern outskirts of the city ... An hour's walking brought him to the rural edges of London, among the market gardens and brick kilns north of Gray's Inn Road ... At a junction of lanes here was a huddle of houses and a small inn. He was hungry but he did not dare to stop. One way led to Watford the other to St Albans. He took a shilling from his new purse and tossed it. It came down heads. St Albans then."

"'I had hoped the business might be settled privately between us,' Van Dillen said. 'The outcome must be doubtful in law and if we go to the extent of a hearing there are costs to be thought of. Why should we fatten the lawyers, Mr Kemp?' He was not finding the interview easy. He was physically uncomfortable, for one thing; the seat of his chair was too small for a man of his bulk, and the weather was unseasonably hot. The room had only one window, and the morning sun, strong despite the clogging air of London, slanted through it and lay directly on him. He felt overheated in his bob-wig and broadcloth suit ... He felt an itch on the side of his neck, some insect crawling there ... the windless days and early heat had produced a plague of small black beetles that flew about blindly, getting tangled in wigs and snared in the corner of eyes, copulating and dying, leaving a scurf of corpses ... 'What can be predicted are the legal costs,' Van Dillen said. 'My good sir, the facts are not in dispute, at least as regards the central fact of the Negroes being cast overboard and the necessity thereof.' 'It is precisely the necessity of it that the insurers will dispute if it comes before a court."


"The insurance claim on eighty-five African slaves, cast overboard while still alive from the deck of the 'Liverpool Merchant' on grounds of lawful jettison, was heard at the Guildhall, Justice Blundell presiding. In contrast to the long course of postponements and delays that preceded it, the hearing itself was brief, occupying no more than three hours of the court's time. The insurers were represented by an elderly lawyer named Price, who had a large experience of such cases. Kemp's lawyer, Pike, had wished to hold his fire for the criminal trial at the Old Bailey, which was due to be held at a date not yet specified; he had recommended a young barrister named Waters to represent the ship's owner."

Mark Patton is a published author of historical fiction and non-fiction, whose books can be purchased from Amazon.
Posted by Mark Patton at 02:08 1 comment: