The Streets of Old Westminster: Lundenwic and The Strand

A visitor to London, exploring the City of Westminster, and having walked along Whitehall, can turn to the east and walk along The Strand, passing Charing Cross Railway Station on the right. This was the main street of early Saxon Lundenwic, the trading port that replaced the Roman city of Londinium, which had been abandoned following the collapse of Roman administration in Britain in the early Fifth Century AD. Whereas Roman ships, sailing to and from the Mediterranean, tied up at stone wharves in the old city, the very different vessels that plied the "Whale Roads" of the early Middle Ages, connecting Lundenwic to the markets of the North Sea and the Baltic, were beached on strands. "The Strand" was, literally, the strand, in the sense of a beach, before the Thames was embanked in the Nineteenth Century. Lundenwic, a settlement of wooden buildings, extended from Saint Martin-in- the-Fields in the west to Saint Clement Danes in the east: traces of it have been found in archaeological excavations over the past hundred years, and can be seen in the Museum of London.


Nothing of Lundenwic (other than the course of The Strand itself) is visible on the ground today. There is, similarly, little to see of most of the opulent great houses that, throughout the Middle Ages and into the Sixteenth and Seventeenth Centuries, lined the road that connected the Royal courts of Westminster and Whitehall to Fleet Street and The City: including the London residences of the Dukes of Lancaster; the Earls of Essex and Arundel; and the Bishops of Durham, Exeter, Carlisle, Chester, Worcester and Bath. The grandest of these palaces was the Savoy, which was owned by John of Gaunt, Duke of Lancaster, until it was destroyed in the "Peasants' Revolt" of 1381: the name, alone, survives as The Savoy Hotel, which remains one of London's most exclusive addresses.

The one palace that can still be visited is Somerset House, originally built by Edward Seymour, first Earl of Hertford, and later Duke of Somerset, in 1549. It was sequestered by the Crown, following Seymour's execution in 1552, and subsequently occupied by Anne of Denmark (the wife of James VI and I); Henrietta Maria (the wife of Charles I); and the Parliamentary General, Thomas Fairfax. In its current, neo-Classical, incarnation, it was designed by Sir William Chambers, with new wings being added in 1831 and 1856.

"Old money" gave way to "new" in the Seventeenth and Eighteenth Centuries, and, by the mid-Nineteenth Century, The Strand was very much the domain of entrepreneurs, whose primary business was popular entertainment. One such was Carlo Gatti, an impoverished Swiss immigrant who came to London in 1847, and sold chestnuts and waffles from street stalls. He went on to introduce the ice cream to British consumers for the first time, selling one-lick portions in wafer shells from a stall in Hungerford Market.

The market was badly damage by a fire in 1854, but Gatti was insured. He built a music hall with the proceeds of his pay-out, and sold the site to the South-Eastern Railway Company in 1862 at an enormous profit (Charing Cross Station now stands on this site). He opened a second music hall, "Gatti's in the Road," in 1865; and a third, "Gatti's in the Arches," in 1867. In 1871, he returned to Switzerland, a millionaire.


Another of these entertainment tycoons was Sir Richard d'Oyly Carte, who leased the Opera Comique, off The Strand, in 1874, and who went on to promote the works of William Gilbert and Sir Arthur Sullivan. Like Gatti, he reinvested his early profits, opening the Savoy Theatre in 1881: with seating for 1300 people, this was the first public building in the World to be lit by electricity. With the profits from The Mikado, in 1889, he opened the Savoy Hotel, on the site of John of Gaunt's old palace, employing the dream-team of Cesar Ritz as Manager, and Auguste Escoffier as Head Chef. D'Oyly Carte had to fire both for lining their pockets at his expense, but they did not remain in disgrace for long, going on to found the Ritz Hotel. 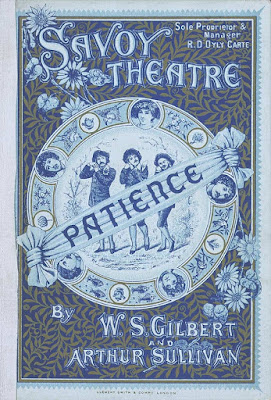 To the east of Charing Cross Station, Villiers Street slopes down towards the Thames (it is named after George Villiers, the first Duke of Buckingham (a favourite of James VI and I, and subsequently an adviser to his son, Charles I). Watergate Walk leads off to the east, and brings us to York Watergate, which gave access to Villiers's palace from the river, the preferred means of transport for the wealthier residents of Seventeenth Century London.

Mark Patton is a published author of historical fiction and non-fiction, whose books can be purchased from Amazon.
Posted by Mark Patton at 07:27 1 comment: