The Streets of Old Lambeth: Streatham - The Road South

A visitor to London, exploring the Borough of Lambeth, and having visited Brixton, can take any one of several buses (159, 133, 333, 118) southwards to Streatham Hill. The railway station here opened in 1856, as part of the West End of London and Crystal Palace Railway, the arrival of which made this area of south London more attractive to London's burgeoning population of commuters. Even before this, however, horse-drawn omnibuses had opened up Streatham to residential development; and, going back to the Eighteenth Century, it was a place to which Londoners came to "take the waters" from local springs; and where the wealthy built their mansions, away from the smoke and noise of the City, yet close enough to commute on horseback, or by carriage.

The current A23 (Streatham Hill, which becomes Streatham High Road as we move south) was a minor Roman Road connecting London to Portslade (now part of Brighton and Hove) on the south coast. In the Seventeenth Century, it was "improved" as a coaching route running through Croydon and East Grinstead to Lewes and the port of Newhaven. England's first supermarket (Express Dairies Premier Supermarket) opened here in 1951.


To the east of the road, two churches stand opposite one another. Saint Leonard's dates back to Saxon times (Estreham is mentioned as a village in the Domesday Book of 1086, its sheep producing wool to make habits for the monks of Bec-Helloun Abbey in Normandy), but only the Fifteenth Century tower predates 1831. The second, taller, church is the Roman Catholic Church of the English Martyrs, opened in 1893, to serve the large community of Irish origin, many of whom worked on the railways which their grandfathers and great-grandfathers had helped to build.


Continuing south along the road, and passing Streatham railway station on the right, we come to Streatham Common, one of the many green spaces that make the London suburbs a pleasant place to live. Most of its mature trees were planted in the late Nineteenth Century. Overlooking the common is Park Hill House (not accessible to the public): it was built, in 1830, by the banker and silver-merchant, William Leaf; but was home, from 1851 to 1899, to the sugar-merchant and philanthropist, Sir Henry Tate. Born in Liverpool, the son of a Unitarian minister, Tate was a self-made man, who endowed not only Streatham's and Brixton's public libraries, but also the Tate Gallery, Liverpool Royal Infirmary, Liverpool University, and the University of London's Bedford College for women.

We have now completed our exploration of the Borough of Lambeth. From outside Streatham railway station, one can take a bus (159, 133, or 118) back to Brixton, and then the Victoria Line to Vauxhall, walking across Vauxhall Bridge into the City of Westminster.

The Story of London in 50 Novels: 8 - "The House of Doctor Dee," by Peter Ackroyd

London during the Sixteenth and early Seventeenth Centuries was a bustling port, with ships arriving on a daily basis from the most dynamic cities of Europe: Stockholm & Copenhagen; Rotterdam & Antwerp; Bordeaux & Seville; Genoa & Venice. These ships brought furs, timber, wine, silks, and spices, but, just as importantly, they brought knowledge and information, and they brought books. Following the fall of Constantinople to the Ottoman Turk in 1453, waves of Greek immigrants settled in Italy, some of them bringing manuscripts from the Byzantine Imperial Archives. Many found work as tutors, teaching Greek to the children of  aristocrats and wealthy merchants, and some, at least, of these, must have found their way to England. The brightest among these immigrants, however, set to work translating the classic works of Greek philosophy, mathematics, and literature into Latin. These works soon appeared in Italian, English, Dutch, and French translations.

In 1527, a boy named John Dee was born in the shadow of the Tower of London, the son of a merchant family of Welsh descent. As a child, he probably spent time on the London docks, and developed a prodigious gift for languages. By the time he began his studies at Cambridge in the 1540s, he could read both Greek and Latin, and probably French, German, and Dutch as well.

He became one of the first fellows of Trinity College, Cambridge, following its foundation in 1546, and began the tradition, which survives at Cambridge to this day, of staging Greek plays in the original language. His production of Aristophanes's Peace gained him a reputation as an illusionist or magician (nobody was quite sure which), as he sent an actor into the roof-space of Trinity College, clinging to the back of a giant beetle, probably with the assistance of college porters who had served as Petty Officers in the Royal Navy.

Despite his Cambridge connections, and his extensive European travels (Louvain, Brussels, Paris, Krakow, Prague), Dee remained, for much of his adult life, a Londoner, accumulating a vast library at his home in Mortlake. He was a philosopher, an alchemist, an astrologer, and a mathematician; an early English enthusiast for the philosophy of Plato, but also for the more esoteric ideas of "Hermes Trismegistus," a supposed Egyptian contemporary of Moses. Like many of his generation, Dee made no distinction between what we would call "science," and what we might think of as "occult" activities. He believed in a harmonious synthesis of all forms of human and divine knowledge: he taught Euclidian mathematics to navigators; but he also experimented in communication with angels. The British Museum holds a collection of objects that he used for these experiments, including an obsidian mirror, probably seized by a Spanish conquistador from an Aztec priest in Mexico.


Peter Ackroyd's novel, The House of Doctor Dee, brings together two London-based stories, both narrated in the first person: the first by a fictional modern character, Matthew Palmer; and the second by John Dee himself. The connection between them arises from Palmer's inheritance, from his father, of a house that once belonged to Dee (although Ackroyd uses artistic license to move this from Mortlake to Clerkenwell - nothing, in fact, remains of Dee's actual home). The worlds of the Sixteenth and Twentieth Centuries come together, as Palmer researches and imagines the ghosts of London Past; and Dee divines and imagines those of London Yet to Come. 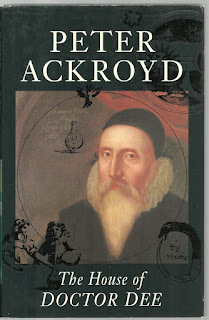 "But why was I thinking about these people, as I sat in the house at Clerkenwell? They were no more than phantoms conjured up out of my weakness, their voices less real to me than the shape of this ground-floor room and the texture of its thick stone walls ... I heard myself talking into the air in my sudden exaltation: 'Let the dead bury their dead' ... Then I noticed something ... And there came upon me a curious fear - that there were, somehow, shadows where no shadows should have been. No, they were not shadows. They were patterns in the dust, caught suddenly in the changing light of that summer's evening."

"We were so close to the waterside that we would take our quadrant ... down Water Lane to Blackfriars Stairs where, among the barges and the herring buses, we called out 'Westward! Westward! until one of the passing watermen noticed us. The wherry took us by the open fields beside Lambeth Marsh where, with the quadrant established upon firm earth, we would make various observations of the sun's progress. Sometimes, coming or going, we were close to falling into the Thames over head and ears with the cumbersomeness of the quadrant, but we always escaped onto dry ground ... There were sly citizens who were accustomed to call us sorcerers or magicians for all this measuring ... 'They had nothing to do with what is vulgarly called magic.' I took more wine to consume the fire within me. 'Mine are wonderful sciences, greatly aiding our dim sight for the better view of God's power and goodness. I am, by profession, a scholar, sir, and not some magician or mountebank.'"

"Now look upon this. Look upon the world without love. I awoke and found myself in as black a night as I have ever known; but I was not in my chamber. I was walking abroad, with the help of a lantern and candle, and now stood below the wall of the city. The stone rose before me like the face of that idol discovered in the Devonshire mines, yet as I raised my lantern I saw all the wrinkles, cracks, crevices and flaws that lay within the ancient stones ... I passed in through the More Gate even as there came the sound of a horn, and one blown with such force that the echo redoubled again in the dark London air. I knew these streets so well that without any light I could have made my way but, when I put up my lantern by All Allowes in the Wall, I saw many citizens walking slowly through the lane there in long gowns and velvet coats. Each one held a wax candle lighted in his hands, and sighed continually as if his bowels might break ... Why did they walk and moan continually, down Wormwood Street and Broad Street?"

Mark Patton is a published author of historical fiction and non-fiction whose books can be purchased from Amazon.