A History of the World in 50 Novels. 10. "The Satyricon," by Petronius

At the beginning of the 5th Century BC, Rome was just one of many city-states that had emerged in Italy under the influence of Greek and Phoenician colonists: it was insignificant by comparison with the Greek cities of Sicily, or even the Etruscan cities to the north. By 282 BC, however, Rome had, by conquest, achieved dominance over virtually the whole of the Italian peninsula.

"Can any man be so indifferent, or so idle," asked the Greek historian, Polybius, "that he would not want to know how, and under what kind of government, almost the whole of the inhabited world fell under the single rule of the Romans in less than fifty-three years?" He had in mind the period between 220 and 167 BC, during which time the Roman legions conquered most of Greece and the Iberian peninsula, as well as a large portion of north Africa. Dying in 118 BC, Polybius could not have known that Rome would go on to conquer France (58-50 BC), Egypt (30 BC) and much of Britain (43-85 AD). In 27 BC, a long and destructive civil war came to an end, leaving much of the known world in the hands of one man, whose heirs and successors, the Julio-Claudian emperors, would rule for almost a century. 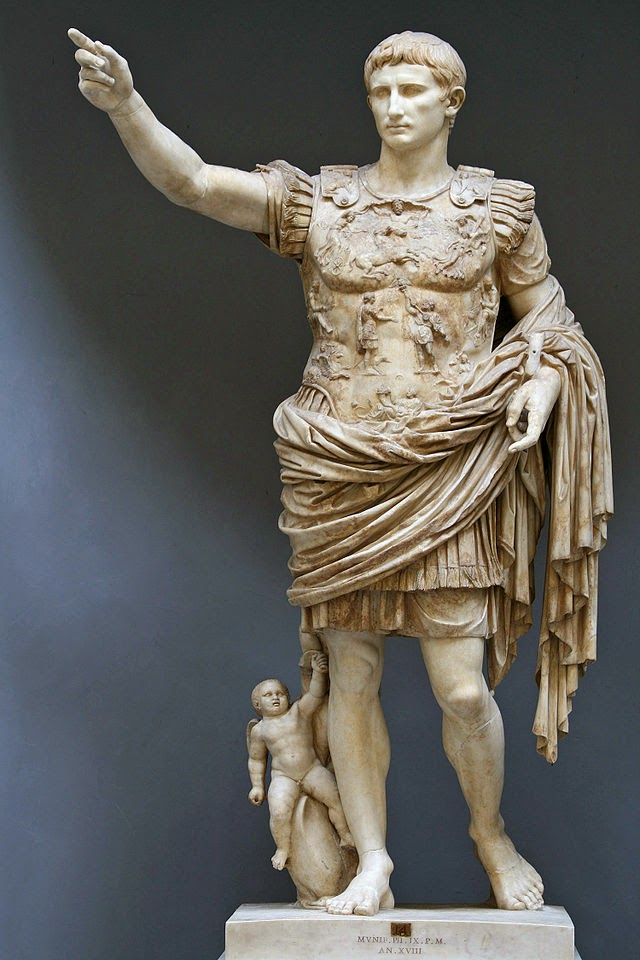 The Emperor Augustus (reigned 27 BC - 14 AD), the first of the Julio-Claudians. Photo: Till Niermann (licensed under GNU). 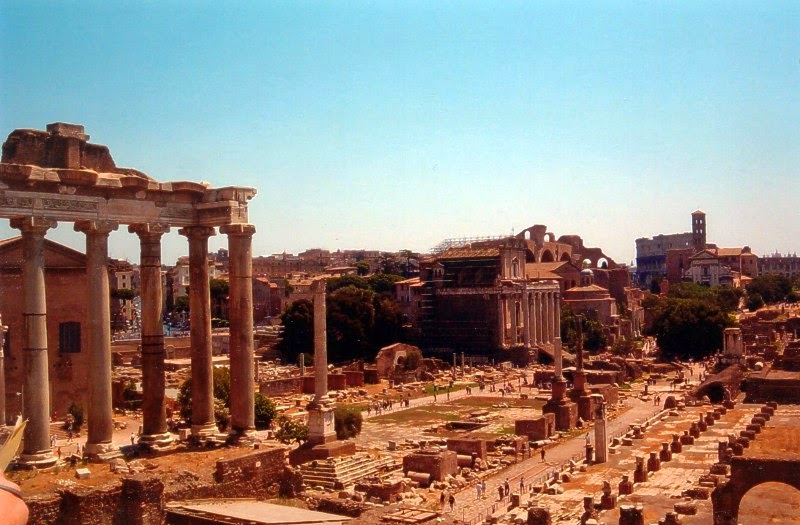 The ancient forum of Rome, centre of the world's most powerful empire for almost five hundred years. Photo: Ygrek (licensed under CCA).

Most of the novels on my list for this series are relatively recent works of historical fiction, but there are just a few voices that speak to us directly from the remote past with a clarity that I cannot bring myself to ignore. Most scholars now agree that The Satyricon was written during the reign of Nero (54-68 AD), the last of the Julio-Claudian line. Its author, Petronius, was a fabulously wealthy aristocrat and courtier, who spent most of his life in Rome itself, but the stories which make up the surviving part of his novel (much of it has been lost) are set around the Bay of Naples, and many of his characters are freedmen and freedwomen (former slaves).

By the 1st Century AD, many slaves were freed by their owners as a reward for years of faithful servitude. Aristocratic Romans shunned commerce, but often profited from it indirectly by means of loans to their former slaves, some of whom achieved significant wealth in their own right. 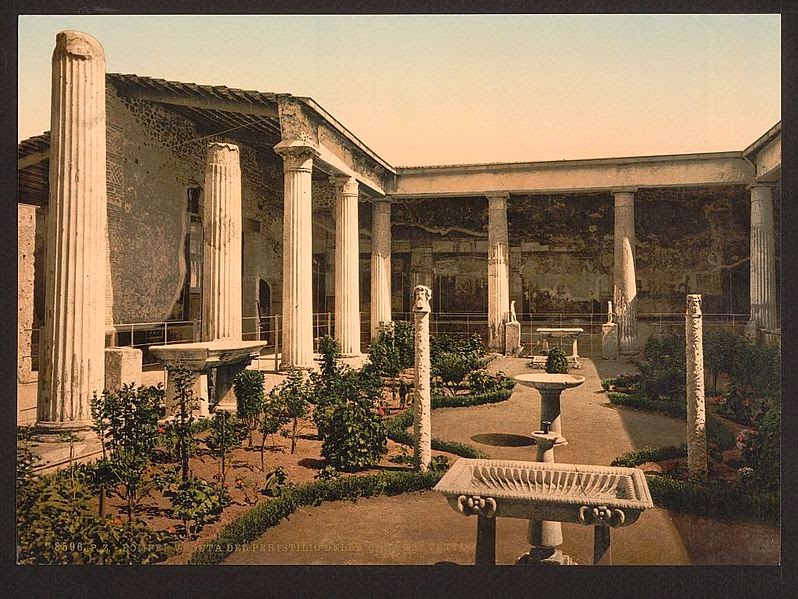 The House of the Vettii, one of the largest and most richly furnished in Pompeii, was owned by two brothers, both of them freed slaves (image is in the Public Domain).

In an earlier blog-post, I explored The Satyricon as one of Europe's first novels, focussing on its most famous scene, a feast hosted by the millionaire freedman, Trimalchio. In modern terms, Petronius was something of a snob, derisive of the vulgar habits of the nouveau-riches. Trimalchio is a grotesque character: boastful of his wealth; a glutton and a bully; his table conversation punctuated by all-too-frank references to his own bodily functions. He and other characters are mocked by the author for their pretensions, superstitions, lechery and morbidity. 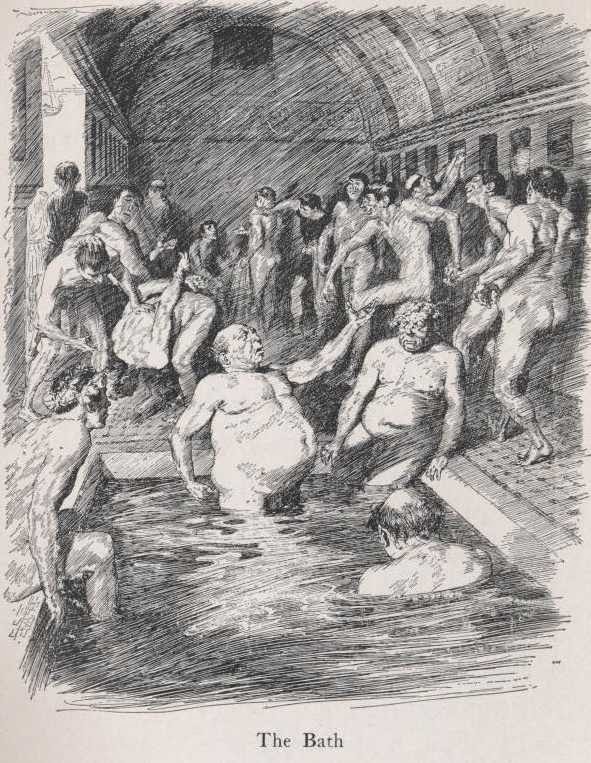 Trimalchio at the baths (image is in the Public Domain).

The plot of the novel is based on a comic re-working of Homer's Odyssey. The anti-hero, Encolpius, a former gladiator, travels around the Mediterranean (the lost opening chapter may have been set in Marseilles) in the company of a friend, Ascyltus, and a stolen slave-boy, Giton, with whom they are both in love. They have various encounters (many of them sexual) along the way; they steal, and are stolen from; they lie and deceive their way out of numerous tricky situations.

One of the characters they meet is Quartilla, a priestess of the ithyphallic god, Priapus. Encolpius and his friends unwittingly intrude on a ceremony conducted by the priestess, who later turns up at their lodging to remonstrate with them, accompanied by an entourage of male and female prostitutes:

"The maid produced two straps from her dress; she tied our feet together with one, and our hands with the other ... Our flow of chatter was now flagging, so Ascyltus piped up: 'Don't I merit a drink, then?' The maid ... clapped her hands and said: 'But I did put one by you ... Young Encolpius, have you drunk the entire potion yourself?'

'Good heavens! said Quartilla. 'Has Encolpius downed all the aphrodisiac?' "

Statue of Priapus, from the House of the Vettii, Pompeii. Photo: Aaron Wolpert (licensed under CCA).

Encolpius, Ascyltus and Giton promise not to reveal the sacred mysteries they have witnessed, and are then obliged to attend a banquet hosted by Quartilla:

"There was a splendid hors d'oeuvre to start with, and we were also abundantly plied with Falernian wine. Then we were served with several main courses as well. But when we began to doze off, Quartilla said: 'What's this? Are you even contemplating sleep, when you are aware that a night's vigil is owed to the guiding spirit of Priapus?

... So the party recommenced ... in came a catamite, the most repulsive character imaginable, surely a worthy representative of that household. He wheezed as he snapped his fingers, and spouted some lines like this:

I have left out the more explicit passages, not so much in the name of decency as in observance of the principle that one novelist ought not to spoil another's plot for the readers!

It is a tragedy that more of this novel has not survived, but what remains adds up to a riotous picaresque journey through the back-alleys of the Roman Empire, with rare and tantalising glimpses into the lives of people who were neither great, nor entirely good.