In 1663, news first reached London of a plague that had been devastating the city of Amsterdam. The extensive trade links between England (especially London) and the Netherlands (most significantly Amsterdam) made it more or less inevitable that the sickness would, in time, make its way to these shores. The plague (both bubonic and pneumonic) was no stranger to Londoners: there had been periodic outbreaks over a period of more than three centuries, the most serious, by far, being the "Black Death" of 1347-8, which wiped out somewhere between a third and a half of the population of England, and set the ground for fundamental social and economic change.


The most recent strain of the plague reached London in the autumn and winter of 1664-5, and raged through the summer of the latter year. Many of the City's wealthier citizens fled into the countryside; as did King Charles II and his court, settling first in Salisbury, and later in Oxford. There was only a limited window of time in which such escape was possible: as soon as the news of the plague spread to the rural districts, the people of the countryside became unwilling to accommodate their urban neighbours, or even allow them to pass.

The Lord Mayor of London, Sir John Lawrence, and most of the Aldermen, had, in any case, opted to remain, and to oversee the City's defences against the unseen killer. Between the, they saw to it that the dead were buried; that regular "Bills of Mortality" were published; and that those known to be suffering from the disease were quarantined in their homes to prevent the spread of contagion.


Ultimately, the disease would kill around 100,000 people (roughly a quarter of London's population), and it would disappear almost as suddenly as it had fallen upon the City. The role of the following year's Great Fire of London in destroying what remained of the disease has probably been over-stated: it seems, rather, that he disease had simply completed its life-cycle. The over-land trade routes that connected the Mediterranean world with the Far East, and along which the plague seems originally to have spread into Europe, were, by this time, in decline, replaced by the maritime routes around the southern tip of Africa and across the Indian Ocean, that were being opened up by Portuguese and Dutch navigators. 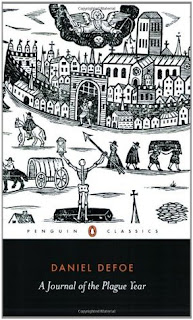 Daniel Defoe's book, A Journal of the Plague Year, published in 1722, has often been seen as a work of non-fiction reportage. It is written in the first person, and appears to be a detailed eyewitness account, but can hardly be so, since Defoe had been just five years old in 1665. The account is credited to "H.F." (possibly Defoe's Uncle, Henry Foe, on whose reminiscences the author may have relied). Although Defoe has sometimes been cited as the first English novelist (John Bunyan and Aphra Behn arguably have stronger claims), those making this suggestion have generally had in mind Robinson Crusoe (1719) and Moll Flanders (1722). Recently however, A Journal of the Plague Year has itself been reconsidered as a novel (and, indeed, a historical novel, since it was written fifty-seven years after the events that it describes took place. Writers of Defoe's generation had yet to agree on a clear definition of what a novel actually was, but this account, though clearly rooted in detailed empirical research, has a number of the features that we might recognise as typical of the novel, including characters (though not many of them), and dialogue (though not very much of it). As such, it gives a fascinating insight, not only into London life during the Great Plague, but also into the embryology of the historical novel in English.


"It was about the beginning of September, 1664, that I, among the rest of my neighbours, heard in ordinary discourse that the plague was returned again in Holland; for it had been very violent there, and particularly at Amsterdam and Rotterdam, in the year 1663, whither, they say, it was brought, some said from Italy, others from the Levant, among some goods that were brought home from their Turkey fleet; others said that it was brought from Candia; others from Cyprus. It mattered not from whence it came; but all agreed it was come into Holland again."


" ... now the weather set in hot, an from the first week in June the infection spread in a dreadful manner, and the bills rose high; the articles of the fever, spotted fever, and teeth began to swell; for all that could conceal their distempers did it, to prevent their neighbours shunning and refusing to converse with them, and also to prevent authority shutting up their houses; which, though it was not yet practised, yet was threatened, and people were extremely terrified at he thoughts of it ...  I lived without Aldgate, about midway between Aldgate Church and Whitechapel Bars on the left hand or north side of the street; and as the distemper had not reached to that side of the city, our neighbourhood continued very easy. But at the other end of the town their consternation was very great: and the richer sort of people ... thronged out of town with their families and servants ... this was a very terrible and melancholy thing to see, and ... it filed me with very serious thoughts of the misery that was coming upon the city, and the unhappy condition of those that would be left in it."

"I say they had dug several pits in another ground, when the distemper began to spread in our parish, and especially when the dead-carts began to go about, which was not, in our parish, till he beginning of August. Into these pits they had put perhaps fifty or sixty bodies each; then they made larger holes wherein they buried all that the cart brought in a week, which, by the middle to end of August, came to from 200 to 400 a week; and they could not well dig them larger, because of the order of the magistrates confining them to leave no bodies within six feet of the surface; and the water coming on at about seventeen or eighteen feet ... "

Mark Patton is a published author of historical fiction and non-fiction, whose books can be purchased from Amazon.
Posted by Mark Patton at 06:22 2 comments: