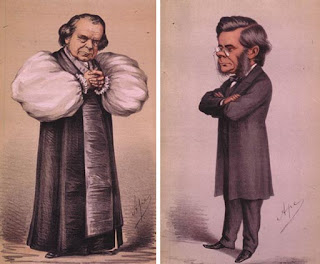 So what, if anything, has changed. Well, for one thing, the only joke that Archbishop Williams made was at his own expense (concerning his lack of familiarity with razors), and at no time did he, or anyone else, deny the non-human origins of our species. Audiences and protagonists alike seem to have become more polite. It seems as natural, in our 21st Century world, for bishops to respect the point of view of atheists, as it does for Christians, Jews and Muslims to respect one another. That, in itself, is surely no bad thing, but it can lend a certain sterility to debates such as this. Last Thursday’s debate may well have been more edifying, but one has to suspect that the debate of 1860 may well have been more fun.
[1] A recording of the debate can be viewed at www.archbishopofcanterbury.org
[2] M. Patton 2007, Science, Politics and Business in the Work of Sir John Lubbock: A Man of Universal Mind. Ashgate.
Posted by Mark Patton at 07:09 No comments: