As a means of telling stories about the human past, verse has a much longer history than prose. Homer's Iliad, Virgil's Aeneid, Guy d'Amiens's Carmen de Hastingae Proelio and Wace's Roman de Brut & Roman de Rou are all verse narratives, telling of events in the recent or distant past (as seen from the perspective of their authors), and combining factual and fictional elements in ways that are not altogether dissimilar from the art of the modern historical novelist. They build on one another, Wace drawing self-consciously on Virgil, just as he himself had drawn on Homer.

Epic poetry as an art-form might be thought to have had its day, but then, in today's Guardian, Will Self argues that the literary novel is set to follow it into obscurity. Whilst fashions come and go, however, an art-form once established is rarely lost altogether. The works of Homer and Virgil have been in print continuously since the invention of the printed codex, and were among the first texts to be made available as e-books.

Writers of all subsequent generations have engaged with these works, but few have done so with more enthusiasm than Derek Walcott. His novel, Omeros, is entirely narrated in verse, and follows quite a tight metrical scheme, close to Dante's terza rima (but rhyming only sporadically). It is not, strictly speaking, historical fiction (most of it is set in present day Saint Lucia), but there is a strong engagement with the historical, as well as the literary, past, and digressions from the main plot tell the stories of the transatlantic slave trade, the colonial experience of the Caribbean islands, and the conflicts between European settlers and the native peoples of the Americas. Walcott is a poet first, and a novelist second, and few novelists could hope to match the elegance of his poetic expression:

"The midshipman swayed in the coach, trying to read.
He knew that the way to fortify character
Was by language and observation: the Dutch road

Striped with long poplar shadows in the late after-
Noon, the weight of the man in his coach, a sunbeam
Changing sides on the cushion, a spire's fishhook

Luring a low shoal of clouds like silvery bream
Towards it; the light gilding the spine of his book,
The stale smell of canals in the red-thatched farmer

Who glowered and swung like a lantern on the seat
Opposite, with the marsh-breath of an embalmer,
A wire-coop of white chickens between his feet ..."

Les Murray's Fredy Neptune is a verse novel which is much more straightforwardly "historical." It tells the story of the First World War and its aftermath from the perspective of Friedrich Boettcher, a working class Australian of German parentage, who experiences the war from both sides, and witnesses the Armenian massacres, the memory of which will haunt him for the rest of his life. Whilst Walcott uses his own narrative voice, the voice of the all-knowing poet, Murray is much more concerned with viewpoint, and adopts a freer verse style to reflect the blue-collar idioms of his protagonist: 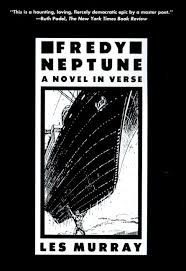 "So the ship rode the Bosphorus like an iron on shined blue cloth
And I drifted into begging, among the wrestlers and porters
And Dardanelles soldiers in their hessian-bag uniforms
With caked brown rag wrapped around the edges of what
Had got shot off them. I drifted between mosques' charity kitchens,
Ayasofya, Suleimanye, the Blue Mosque. And I slept
Sometimes for whole days, with my only clothes sticking to me
As they get. No one would touch me, nor my food ..." 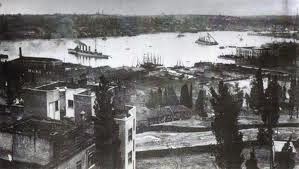 Turkish warships in the Golden Horn during the First World War (image is in the Public Domain).

Bernardine Evaristo takes an altogether more playful approach in The Emperor's Babe, set in London in the 3rd Century AD. Like Murray, she narrates her story through a specific viewpoint (that of Zuleika, a wealthy senator's wife who gets involved in a dangerous liaison), but she cheerfully mixes up ancient and modern idioms, and spices her text with ironic humour, not to mention sex: 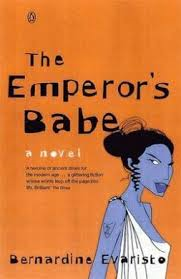 "I'd convinced Felix years ago

That Tranio needed a wife, that as he wasn't exactly
Maitre d' of the Londinium Charm School,

He would live a happier, longer life,
Everyone knew bachelors and widowers

Did not last as long as their married
Counterparts. I picked my moment.

Felix lay by my side, catching his breath,
Oozing satisfaction, his sleepy member

Curled up like a giant slug, still dribbling.
'Does he need one?' do you think ..." 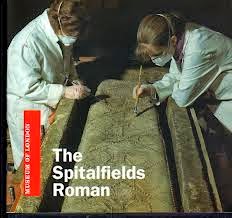 The excavation of the Roman lead coffin, which inspired Evaristo's novel and protagonist.

Novels in verse will probably never occupy more than a tiny niche in the larger market for narrative fiction. It is notoriously difficult to make one's living as any sort of poet, let alone as an epic or narrative poet, and, when agents periodically publish lists of the sorts of books they are looking for, "novels in verse" don't generally feature on them. Despite this, Omeros, Fredy Neptune and The Emperor's Babe are among the best works of fiction in any genre that I have read in recent years.

Even if I never attempt a novel in verse myself, I think there is something that all writers can learn from the ways in which these authors use and enjoy the language in which they write. I recently gave a group of students two texts to compare: the first was an extract from Fredy Neptune, but with the line-breaks removed, so that it had the appearance of prose; the second was an extract from Jim Crace's Harvest, a prose novel, but with line-breaks added, so that it looked like poetry. Most confidently asserted that the first was prose, and that the second was poetry, but the real point was that both works had been written with an attention to detail, at the level of the individual sentence, that is more characteristic of poetry than of prose, and this is something that any writer can seek to emulate.

Mark Patton's novels, Undreamed Shores and An Accidental King, are published by Crooked Cat Publications. E-Book editions can be purchased from the Crooked Cat Bookstore and paperback versions from Amazon UK and Amazon USA.
Posted by Mark Patton at 06:12