Historical Fiction and the Third Reich: Thoughts on "Generation War"

Television viewers in the UK have recently seen a subtitled three-part drama serial, produced in Germany and dealing with the Second World War from the perspectives of five young Germans. Generation War: Our Mothers, Our Fathers, follows the lives of five friends from 1941 to 1945. None of the main characters are committed Nazis, although four of them become caught up in the movement with varying degrees of acquiescence and reluctance. The fifth character, Viktor Goldstein, is Jewish, and survives the war through a combination of resourcefulness and good luck.

As a work of drama, it has been highly acclaimed, but, as a depiction of history, it has been criticised. It has even been the subject of a televised debate, which is available, for a limited time, on BBC I-Player. This debate raises some interesting questions relevant to all writers and readers of historical fiction. 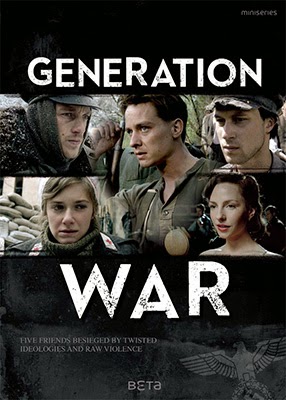 In the televised debate, Professor Eva Hoffman described aspects of the series as being "implausible to the extent of being ahistorical," whilst Professor David Cesarani accused the film-makers of "playing fast and loose with the past." In the course of the debate, however, it became clear that the objections focussed principally on just two scenes.

The first scene, in which the five friends gather in a bar, was considered to be implausible on the basis that Jews were not, in 1941, free to associate in public with non-Jewish Germans. There was much discussion in the debate about the distinction between "implausible" and "improbable," and writers, readers and viewers will have their own degrees of willingness to suspend disbelief. There was no suggestion that Viktor's experience was in any way typical of that of German Jews, and most of us (not just historians) know that this is very far, indeed, from being the case. All the same, I wouldn't personally have used that storyline.

A scene in the third episode presents the Polish Resistance in a very unflattering (and, in the view of the historians, inaccurate) light, with minor characters shown to be almost as resolutely anti-Semitic as the Nazis. This has prompted protests from the Polish Ambassador in London. That anti-Semitism existed in Poland is well attested, as is the fact that many Polish Resistance workers risked their lives to protect Jews. The criticism here, therefore, is not of implausibility, but simply one-sidedness, and it could easily have been addressed by including a debate among the Resistance workers (I thought it a failure of characterisation that one woman in the group didn't argue Viktor's case, given that she had formed a bond with him, and had been set up as both a brave and a sympathetic character). 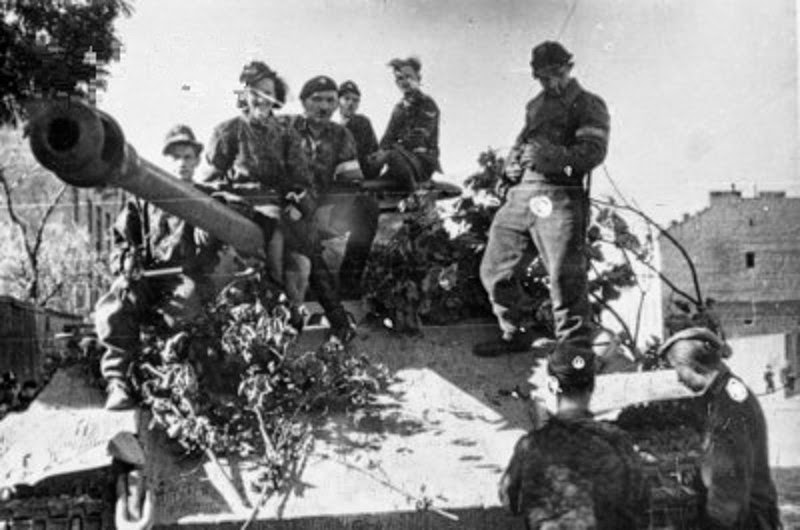 Men and women of the Polish Resistance with a captured Panther tank. The image is quite different from that presented in Generation War (image is in the Public Domain).

Anne McElvoy described the series as "Downtonesque." I think this to be unfair (it deals with very serious issues, and seems to me, despite its flaws, to take them seriously). I did think, however, that the plot had far too many coincidences, reuniting the friends under highly improbable circumstances and helping them to sustain their friendship and connections. Creative writing students are taught, at a very early stage in most courses, to avoid devices such as this.

Taken as a whole, the series does not gloss over or minimise Nazi atrocities, nor does it present its main characters as passive victims: two of them (serving in the regular army rather than the SS) are drawn into committing outrages against civilians, whilst a third voluntarily betrays a Jewish woman to the authorities. Imperfect though it is, I thought it a strong drama and, on balance, more likely to inspire debate than to mislead.

The televised debate, however, raised some much more fundamental questions about the responsibilities that fall upon those of us who fictionalise the past. These questions are thrown into sharp relief in fiction that deals with events in the relatively recent past, and in relation to which emotions are still highly charged. One screen-writer, Anthony Horowitz, suggested that writers could do as they please, that we are in the business of popular entertainment, and have no obligation to portray the past accurately (he did also make the point that we should stop short of outright distortion or "propagandisation"). Entertainment is part of what I, as a writer, seek to do, but it is not my sole aim (and, if it were, I would steer clear of the Holocaust as a focus of attention). Professor Sir Richard Evans seemed to be suggesting that it is simply not possible for fiction to fathom the motivations of people in the past. I am more optimistic than he is about the scope of the human imagination.

Generation War is arguably part of a trend that has emerged over the last decade, during the course of which it has become more acceptable to explore German viewpoints in relation to the Second World War. This does not make it acceptable, for example, to deny the Holocaust, or to justify Nazi atrocities (the sort of "propagandisation," presumably, that Horowitz had in mind), but exploring the recesses (including the darkest ones) of the human psyche is one of the things that fiction does best, and has done since the days of Homer and Aeschylus. The past cannot be out of bounds to dramatists and novelists, although a clear distinction should be made (as it was not by ancient writers such as Tacitus and Cassius Dio) between the writing of history and the writing of historical fiction.

There are pitfalls to be avoided, prominent among them what Cesarani calls "presentism" - the characters in Generation War are, in his view, "modern Germans," with modern attitudes, "catapulted back" to 1941. I'm not sure this is entirely fair (many characters expressed views that I would not expect to hear today), but most of us have read historical novels and watched historical films or TV programmes in which this weakness is prominent. 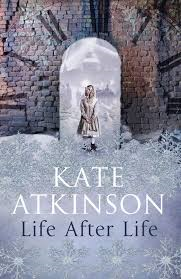 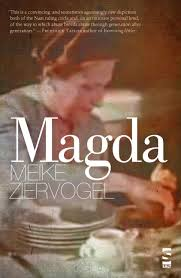 Kate Atkinson's Life After Life and Meike Ziervogel's Magda are two novels which avoid both this pitfall, and the more serious one of historical implausibility. I have reviewed them both in an earlier blog-post, both are carefully researched and, in their different ways, I believe that they both lead the reader towards a deeper reflection on some of the most traumatic events of the 20th Century than most are likely to draw from factual history alone.

Mark Patton's novels, Undreamed Shores and An Accidental King, are published by Crooked Cat Publications. E-book editions may be purchased from the Crooked Cat Bookstore, and paperback versions from Amazon UK and Amazon USA.
Posted by Mark Patton at 07:44