The Winter Solstice - a pre-Christian Epiphany

Western Christians celebrate the feast of the Epiphany on 6th January, commemorating the presentation of the infant Christ to the Magi, as outlined in the Gospel of St Matthew. In Matthew’s account, this is the first time that the child is seen by anyone apart from Mary & Joseph (the story of the shepherds is in the Gospel of St Luke – Mark and John say nothing directly about the Nativity).


The Greek word ἐπιφάνεια refers to the direct physical manifestation of a deity on Earth. Anthropologists often use the word “epiphany” to refer to a religious ceremony in which a deity symbolically becomes present, often through the medium of a priest or similar specialist.


There is evidence, however, that the pre-Christian peoples of Europe, for whom the sun itself was a deity, aligned their religious sites in such a way as to create their own “epiphanies” on particular days of the year without any need for the deity to be represented or impersonated by a human being. The Summer and Winter Solstices, together with the Autumn and Spring Equinoxes, may not have been the only such days, but they were probably the most significant, and are certainly the easiest to demonstrate.


The passage grave of Newgrange in Ireland, built around five thousand years ago, is oriented so as to receive the rays of the rising sun on the morning of the Winter Solstice. I was privileged to witness this some years ago. We crouched in the chamber and waited for the sun to pass through a specially designed box above the entrance, illuminate the entire chamber briefly, and then gradually recede down the passage. 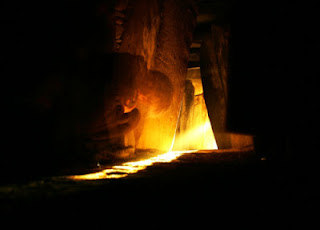 The contemporary monument of Maes Howe in Orkney is oriented to receive the last rays of the setting sun at the Winter Solstice. I was there 29 years ago, but was not so lucky as I was at Newgrange: clouds got in the way. 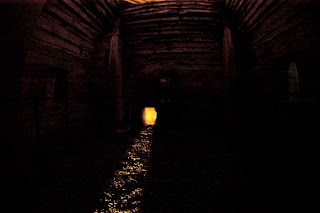 Rather fewer people get to see the Midwinter Sunset at Stonehenge. The main axis of the monument centres on the Midsummer sunrise and the Midwinter sunset. For the past few years, English Heritage have opened it for the Midwinter sunrise, which slightly misses the point. Both the summer and winter ceremonies are featured in my novel, Undreamed Shores. It is difficult to imagine just what the experience would have felt like and signified to a man or woman four or five thousand years ago, witnessing it for the first time. You enter a narrow passage in the pitch dark at the behest of a priest, shaman or elder, who tells you that the god will appear to you personally, and it then happens! What would one feel? Fear? Awe? Amazement?


Unless you have won the lottery (literally – there now is a lottery for admission), you won’t be able to greet the sunrise at Newgrange tomorrow morning. You can, however, follow it on a live webcam from around 0730 GMT at www.rte.ie/newsnow. I am not sure of the current arrangements at Maes Howe – when I went, one had only to turn up – but again, there is a live webcam from around 1530 GMT at www.maeshowe.co.uk.


If you miss these, or if the weather fails to oblige, you will find prior recordings at:


Mark Patton's novels, Undreamed Shores, An Accidental King and Omphalos, are published by Crooked Cat Publications, and can be pucrhased from Amazon.
Posted by Mark Patton at 04:10