As 2012 draws to a close, I thought I would share some of the year’s books that have given me the most pleasure during the course of the year. It is a very personal selection (for which I make no apology, since it would otherwise duplicate the various lists widely available elsewhere), and reflects my particular interests. I have quite deliberately included both fiction and non-fiction, and works which might be considered (by those who believe in a clear distinction, which I’m not sure I do) “literary” and “commercial.”


On the British literary scene, and certainly in historical fiction, the book of the year was surely Hilary Mantel’s Bring Up The Bodies (Harper Collins, May 2012), winning her a second Booker Prize as well as taking her onto the shortlist for the Costa Book Awards. It was a book I had been looking forward to reading, and it certainly did not disappoint. Another book I greatly enjoyed was Cathie Dunn’s Dark Deceit (Crooked Cat, July 2012). Between them, these two very different books set out what historical fiction can achieve.


Like Robert Graves’s Claudius novels and Marguerite Yourcenar’s Memoirs of Hadrian, Mantel takes us into the beating heart of the political establishment at a time of great political and social upheaval (Henry VIII’s “Great Matter,” the Dissolution of the Monasteries, the rise and fall from grace of Anne Boleyn), but gives us a window onto these events from an unconventional viewpoint, that of Henry’s chief minister, Thomas Cromwell. Other writers (Robert Bolt, Philippa Gregory, Jean Plaidy) have given us different perspectives on the same events, but Mantel is the first to take Cromwell’s point of view seriously, to “resurrect” him as a three dimensional character and explore this world through his eyes.


Dunn writes more in the tradition of Sir Walter Scott’s Waverley novels, Charles Dickens’s A Tale of Two Cities or Andrew Miller’s Pure, focussing on characters caught up in the great sweep of history (in Dunn’s case the 12th Century civil war between King Stephen and the Empress Matilda), but at some distance from the “great” names that we know from the history books. It hardly matters whether such characters are fictional or historical since, in the latter case, we generally know very little about their lives. In Dunn’s book, we see the England and Normandy of “The Anarchy” through the eyes of members of the minor nobility, some of whom are “historical” (in the sense that their names and properties are known) and others fictional. 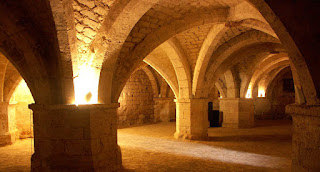 The undercroft of the stronghold of Mortagne de Perches, Orne, a site associated with one of Dunn's characters.
Loyalty and trust are key themes in both books. They are in short supply both at the court of Henry VIII (“Wolf Hall,” which Mantel took as the title for the first of her Cromwell novels, is the historical Wiltshire seat of the Seymour family, but is used by Mantel as a metaphor for Henry’s court more generally) and in the ungovernable lands of Normandy and England amid the shifting alliances of the mid-12th Century.


One of the threads running through Wolf Hall and Bring Up the Bodies is Cromwell’s loyalty to the person and memory of his mentor, Cardinal Wolsey, a man of similarly humble origins who rose to greatness, like Cromwell himself, on the basis of his own talents. After Wolsey’s death in Wolf Hall, Cromwell sees echoes of his presence whenever he sees the colour red: 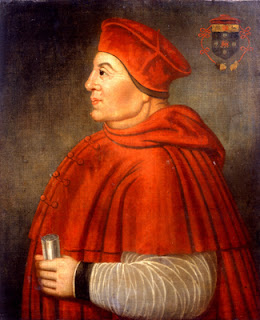 “The Cardinal’s scarlet clothes…cannot be wasted. They will be cut up and become other garments…Your eye will be taken by a crimson cushion or a patch of red on a banner…You will see a glimpse of them in a man’s inner sleeve or in the flash of a whore’s petticoat…”


In Dark Deceit, the heiress, Alleyne de Bellac, is caught between two men, not knowing which (if either) to trust, and whether their apparent concern for her is genuine or motivated by mercenary considerations. The fear of violence is never far from her mind, and can be foregrounded by the most innocent of circumstances:


“With unsteady hands, she picked up a clay jug brimming with rich, red wine and poured a generous measure into a goblet. When a drop splashed on the snow-white sheet she jumped backwards…A stain spread out over the white linen like blood. A vision of Father…came to her unbidden…”


In both cases, it is the distinctiveness of the viewpoint that takes us into territory that the historian can rarely penetrate.
Posted by Mark Patton at 02:55