For my second selection, I have chosen two works of non-fiction. As a historical writer, I naturally draw on both fiction and non-fiction as inspiration for my own work. One of my main concerns in writing Undreamed Shores was the depiction of a landscape which is likely to be both familiar and unfamiliar to readers. It is the landscape of Dorset, Hampshire and Wiltshire, but in 2400 BC, before those transformations (including the building of the Roman roads and the Norman churches & castles; the Agrarian and the Industrial Revolutions) that made it the landscape we know today.


One of the books that first fired my interest in the English landscape was Jacquetta Hawkes’s A Land, initially published in 1951, but re-released this year as part of the Collins Nature Library. I must have read it for the first time when I was in my early teens and, having grown up on the granite of Jersey, the chalk of Kent, and the “Old Red Sandstone” of Devon were largely unfamiliar to me. Later, as a student at Cambridge, I had the privilege of meeting Jacquetta Hawkes – she had quite a forbidding reputation, but I saw nothing to justify this – she shared generously of her knowledge and experience.


Hawkes, an archaeologist, set out to use “…the findings of the two sciences of geology and archaeology for purposes altogether unscientific,” to evoke an image of the land of Britain “…in which past and present, nature, man and art appear all in one piece.” Two themes dominate her book: the geological creation of the land itself over millions of years; and the growth, over thousands of years, of a human consciousness of it. Henry Moore and Ben Nicholson (both friends of Hawkes) contributed drawings to illustrate it. The image of the land that she evokes is built upwards and outwards from the rocks themselves.


The rocks, of course, were raw materials with which Henry Moore was intimate, and she writes of a personal epiphany in his studio, when she saw one of his unfinished reclining figures, with the shaft of a belemnite fossil exposed in the thigh, and had an overwhelming vision of the “unity” of past and present, of mind and matter, of man and man’s origins. Although trained as a scientist, she writes with a poet’s sensitivity. As Robert MacFarlane notes in his introduction to the new edition, a contemporary review compared her style to that of Donne’s sermons, having “…something of their imaginative range…their passion of exploration, their visionary sense of integration.”


If it is good to see an old favourite given new life, it is better still to see some of its themes taken to a wholly new level in a new and original work. Such is Robert MacFarlane’s own book, The Old Ways (Hamish Hamilton). The human consciousness of the landscape is very much to the fore here, as is the unity of past and present.


MacFarlane himself identifies the poet and essayist, Edward Thomas, as “…the guiding spirit of this book,” but the influence of John Clare and Bruce Chatwin is also evident and, where Hawkes references Henry Moore and Ben Nicholson, MacFarlane draws on Paul Nash, Eric Ravilious and Richard Long. Fundamentally, he is concerned with the traces that successive generations make on a landscape and the ways in which those traces contribute to the interpenetration of past and present: 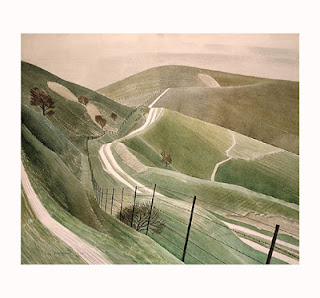 “The snow was densely printed with the tracks of birds and animals – archives of the hundreds of journeys made since the snow had stopped…To all these marks I added my own…The snow was overwhelmingly legible. Each print-trail seemed like a plot that could be read backwards in time…”


In researching the book, MacFarlane undertook a series of walks, following in the footsteps of a Mesolithic family (literally – their footprints are preserved in peat) in the intertidal zone of Essex and (figuratively) the Medieval pilgrims on the route to Compostela; following the Icknield Way across the chalk-lands of southern England; tracing the coffin-paths and drove-roads of Scotland; even accompanying a Palestinian colleague on a sarha (saunter) around Ramallah. The book is subtitled “A Journey on Foot,” but it includes also a number of journeys by sea around the western coast of Scotland. 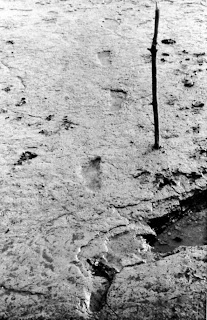 
This combination made immediate sense to me In Undreamed Shores, I write about a world (southern England and northern France in c2400 BC) in which all journeys were made either on foot or by boat. My research included a walk from Christchurch to Stonehenge (five days of walking, fifty pages of notes, only ten pages in the book, but I could not have written it without the research), and drew also on many years of experience of sailing and open water swimming in my youth.


MacFarlane’s rapturous descriptions of fragments of the landscape make this an unforgettable read but, precisely because they are only fragments of landscapes which no two people will ever experience in the same way, they inspire us to get out and explore for ourselves:


“Sand mimicked water, water mimicked sand, and the air duplicated the textures of both. Hinged cuckoo calls; razor shells and cockle shells; our own reflections; a profusion of suns; the glide of transparent over solid.”