In 1453, Constantinople, the capital of the Christian empire of Byzantium, fell to the Muslim forces of the Ottoman Sultan, Mehmet II. In the years that followed, a number of Christian scholars migrated to Italy, bringing with them a knowledge of the Greek language, and, in some cases, manuscript copies of ancient Greek texts that would give new life to the Italian Renaissance. Most of the Christian population of what was, by now, Turkey, however, stayed where they were, the autonomy of the Orthodox Church guaranteed by the Sultan, and many of the Greek mercantile elite actively preferring Ottoman over the alternative possibility of Venetian rule.

The Topkapi Palace in Istanbul, from which the Ottoman Sultans ruled much of the Cemtral and Eastern Mediterranean. Photo: Christian Torrisson (licensed under CCA).

A new world order had been established. With the conquest of Asia Minor came control over the silk and spice routes linking China and India with the growing markets of northern and western Europe. This, more than anything, was what inspired the rulers of Spain, Portugal, England and the Netherlands to finance the voyages of discovery that would lead to the colonisation of the Americas, and the opening up of trade routes across the Pacific. 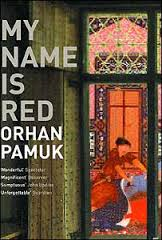 Orhan Pamuk's novel, My Name is Red, stands, in a sense, as a companion-work to Marguerite Yourcenar's The Abyss, dealing with the same period of rapid cultural change, but from an Asian, rather than a European point of view. Prior to the capture of Constantinople, the Byzantine Empire had stood between the Muslim and Catholic worlds, but now the Ottoman Empire faced Italy, France and Spain directly, establishing an uneasy dialogue between civilisations that saw the world in profoundly different ways.

The novel is set in the claustrophobic world of the miniaturists in the Ottoman court, operating under the direction of the historical figure of Nakkas Osman ("Master Osman" in the novel), and takes place over just a few days during the winter of 1591. Master Osman himself is true to the style of the Persian master, Bihzad (1450-1535), but some of his miniaturists moonlight for another master, Enishte Effendi, who has been commissioned by the Sultan to produce a book with illustrations influenced by European art. 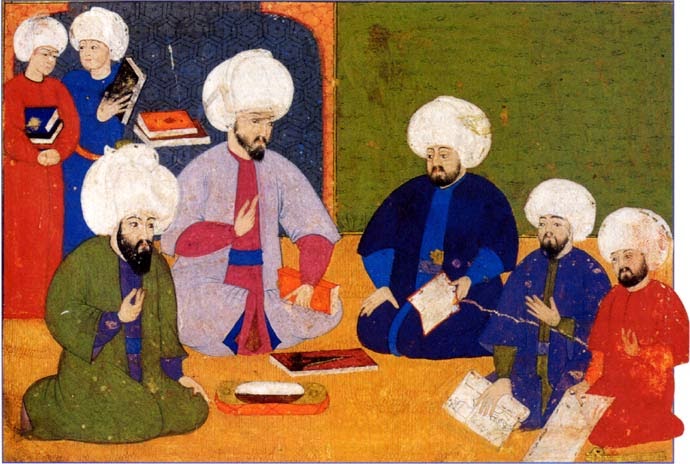 The consultation of old scriptures, by the historical Nakkas Osman ("Master Osman" in the novel). Image is in the Public Domain). 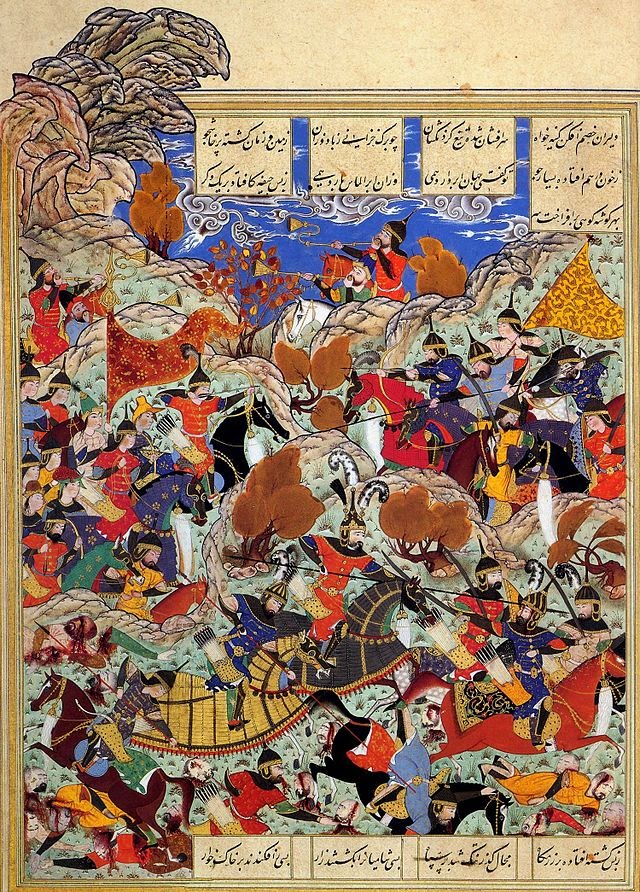 A battle between Timur and the Mameluke Sultan of Egypt, by the Persian master, Bihzad. Golestan Palace, Tehran (image is in the Public Domain).

The miniaturists themselves are friends, colleagues, sometimes even lovers, but, inevitably, they are also rivals, both in their work and in their private lives. With religious disputes and rivalries for the hand of a beautiful woman, murder stalks the snow-bound streets, and nobody knows who the murderer is, or who the next victim will be. 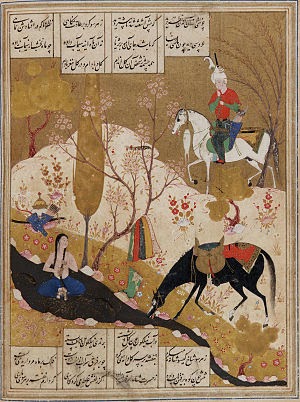 A scene from the romance of Husrev and Shirin, semi-historical, semi-mythical figures whose story is interwoven with those of Pamuk's characters. Image is in the Public Domain.

As a complex story of art, murder, love, religion and politics unfolds, Pamuk passes the narrative baton from one character to another, and the characters are not just living people: corpses, coins, drawings, even abstract concepts such as the colour red, take their places in this dazzling narrative relay race to an unknown destination. 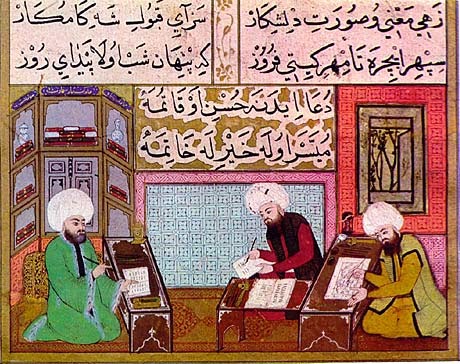 Ottoman miniaturist painters (image is in the Public Domain).

"I am nothing but a corpse now, a body at the bottom of a well. Though I drew my last breath long ago and my heart has stopped beating, no one, apart from that vile murderer, knows what's happened to me. As for that wretch, he felt for my pulse and listened for my breath to be sure I was dead, then kicked me in the midriff, carried me to the edge of the well, raised me up and dropped me below. As I fell, my head, which he'd smashed with a stone, broke apart; my face, my forehead and cheeks, were crushed; my bones shattered, and my mouth filled with blood."

"I'm a dog, and because you humans are less rational beasts than I, you're telling yourselves, 'Dogs don't talk.' Nevertheless, you seem to believe a story in which corpses speak and characters use words they couldn't possibly know. Dogs do speak, but only to those who know how to listen."

"I am a tree and I am quite lonely. I weep in the rain. For the sake of Allah, listen to what I have to say. Drink down your coffee so your sleep abandons you and your eyes open wide. Stare at me as you would at jinns and let me explain to you why I'm so alone ... They allege that I've been hastily sketched onto nonsized rough paper so the picture of a tree might hang behind the master-storyteller. True enough ... there are no other slender trees beside me, no seven-leaf steppe plants, no dark billowing rock formations which at times resemble Satan or a man and no coiling Chinese clouds ... But my story is so much more complicated."

Tales sit within tales, and some of them are lies, as human and non-human characters address the reader directly, and Pamuk explores the art of storytelling itself, and the nature of the relationship between realities and their portrayals.

Mark Patton's novels, Undreamed Shores, An Accidental King and Omphalos, are published by Crooked Cat Publications, and can be purchased from Amazon UK or Amazon USA.
Posted by Mark Patton at 03:27