A History of the World in 50 Novels. 20 - "Shipwrecks," by Akira Yoshimura

Samurai boarding enemy (Mongol) ships in 1261 (image is in the Public Domain).

If Akira Yoshimura's novel, Shipwrecks, is set in Medieval Japan, precisely where and when in Medieval Japan is quite unclear (Yoshimura's writing style here resembles that of Jim Crace), because the setting is a remote fishing village. Life in such communities probably changed little between 1000 AD and 1917, when the American photographer, John Wells Rahill, recorded village life for us in a series of images that seem uncannily familiar to me, having read Yoshimura's novel. 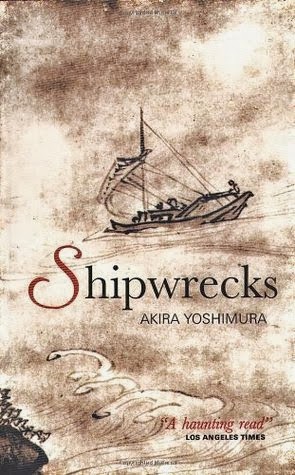 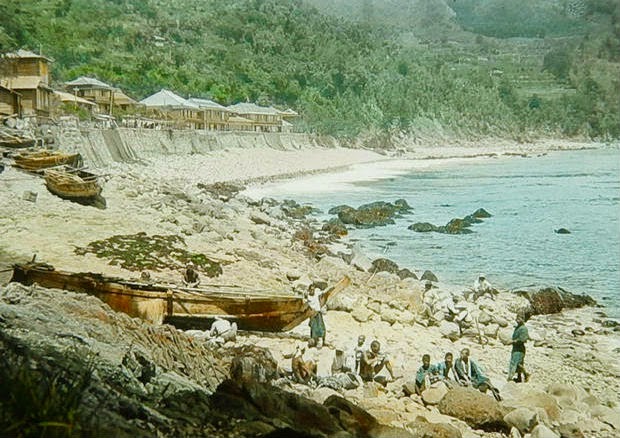 A Japanese fishing village in 1917. Photo: John Wells Rahill (image is in the Public Domain).

My best guess is that the novel may well be set during the Ashikaga Shogunate (1336-1573), when trade flourished between Japan and China's Ming Dynasty, Japanese wood, sulphur, copper ore, swords and fans being exchanged for Chinese silk, porcelain, books and coins. It hardly matters, since the village of Yoshimura's protagonist, Isaku, is far from the ports where the trade was taking place. 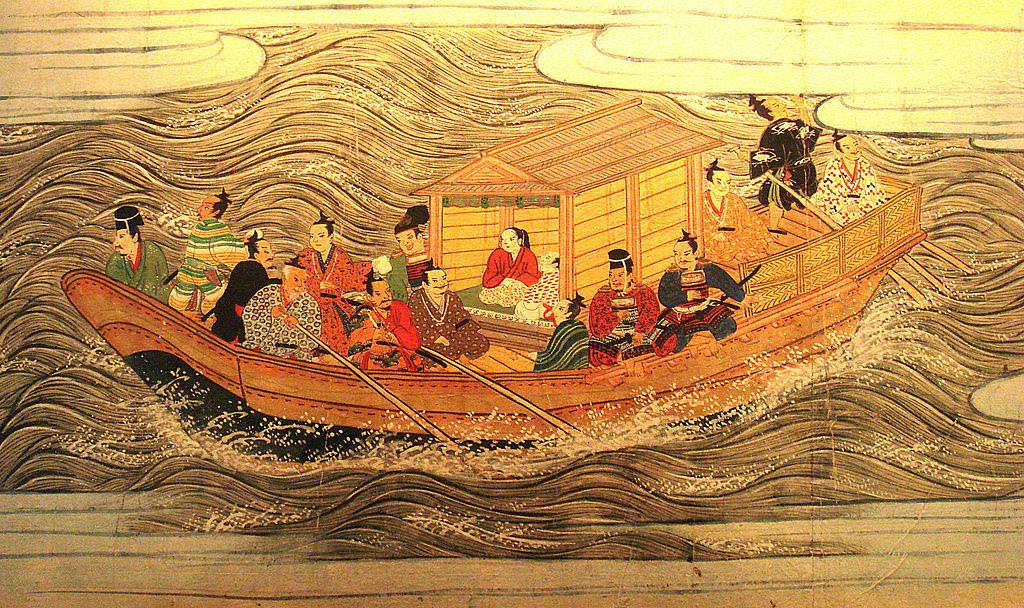 Isaku is, at the beginning of the novel, a nine-year-old boy, learning to fish himself, at the same time as teaching his younger brother. His father is absent, an indentured labourer for a shipping agent, so the boys are looked after by their resourceful mother, in a village watched over by a local chief. The threat of starvation is never far from the lives of the villagers. The fish they catch is supplemented only by what rice can be obtained by those, like Isaku's father, who work away from the village. At nights, the villagers light fires on the beach, to heat cauldrons of sea-water in order to extract salt. This activity, however, has another, secret purpose: the villagers hope that their fires will lure passing ships onto the rocks, so that they can plunder the cargoes, a rare but eagerly hoped-for occurrence which the villagers call "O-fune-sama."

The morality of this activity is never questioned by the villagers (even though the crews are butchered), but we are far indeed from the black and white moral universe of Daphne Du Maurier's Jamaica Inn: Yoshimura's skill as a writer takes us so deeply into the lives of these people, that we feel what they feel, and understand only too well why they act as they do.

"Old conical hats made of sedge moved in the line of surf. Spray shot up from the breakers, first at the end of the reef-lined shore, and then closer and closer as the waves rushed in, until the water where Isaku was standing swelled up and smashed onto the rocks before streaming back out again. The surface of the water was foaming white from the fierce rain.  mixture of raindrops trickled down through the hole in Isaku's hat. There was only a sliver of sandy beach on this rockbound coast, and there, too, people in sedge hats were busy collecting driftwood ... " 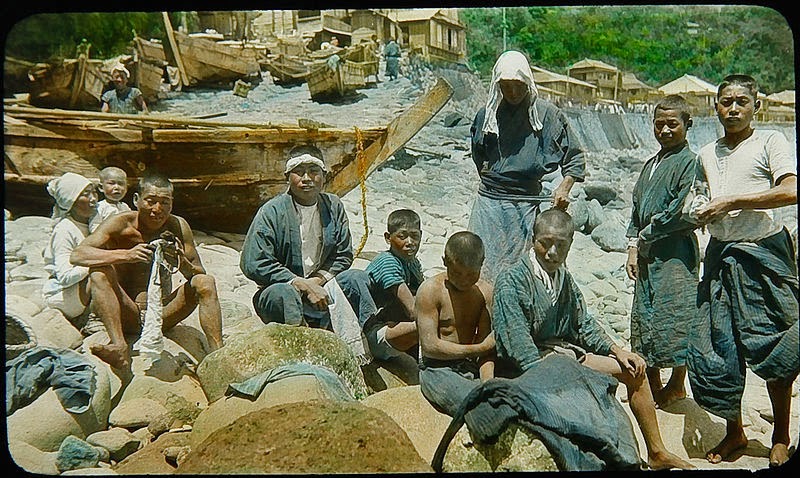 Japanese fishermen in 1917. Photo: John Wells Rahill (image is in the Public Domain.

"Flames rose from under the two cauldrons, flickering in the wind off the sea as sparks scattered on the sand. Isaku watched the flames as he sat next to Kichizo on a log inside a makeshift wooden hut ... A wave of drowsiness suddenly hit Isaku as he warmed himself by the fire. His body was numb, and his eyelids started to feel heavy. If he nodded off, no doubt he would be removed from salt-making duty, and his mother would fly into a rage and beat him ..."

"Soon they reached the top of the promontory. This was the first time Isaku had set foot there ... Down below they could hear the thunderous waves breaking on the rocks ... They could see the water seething white around the reef, and they had a clear view of the wrecked ship. It was an excellent spot to post a lookout ... The fleet of small boats converged on the stranded ship, eventually surrounding it just like a horde of ants around a caterpillar. Several boats drew up alongside the ship, and he could see people climbing aboard ... " 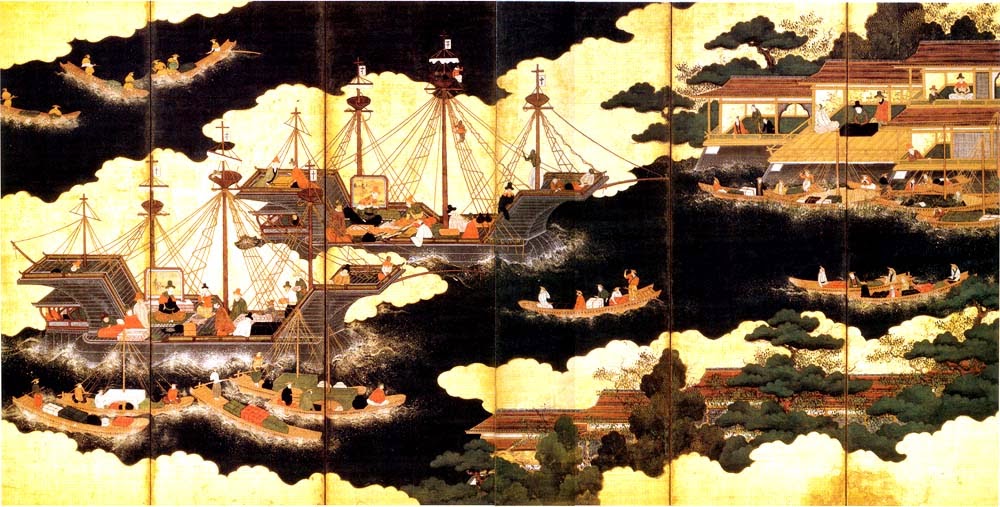 A 16th Century image of Japanese ships (image is in the Public Domain).

There is a twist in this particular tale, an unforeseen consequence of the villagers' opportunism which changes the course of this coming-of-age story, dashing Isaku's hopes for the future. He is alive, and he is reunited with his father, but quite what future lies ahead of them is left, in the end, to the imagination of the reader.