Although Charlemagne was crowned as Roman Emperor by Pope Leo III, in 800 AD, the position remained within his family for less than a century, and was afterwards contested between various Italian claimants. In 962 AD, a German Prince, Otto I, adopted the title, presenting himself as Charlemagne's successor. From this point onwards, the office was elective among German prince-electors, each successive emperor having the difficult task of holding together a patchwork of around 1600 individual German principalities.

In 1152, Frederick Duke of Swabia was elected King of Germany. Three years later, he was crowned Roman Emperor by Pope Adrian IV. His approach to the challenge of Empire was to emphasise both the "Holy" and the "Roman" dimensions of his rule, subjugating the states of northern Italy and transferring sacred relics from Italy to Germany. 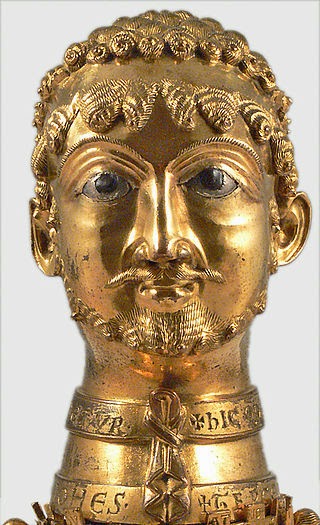 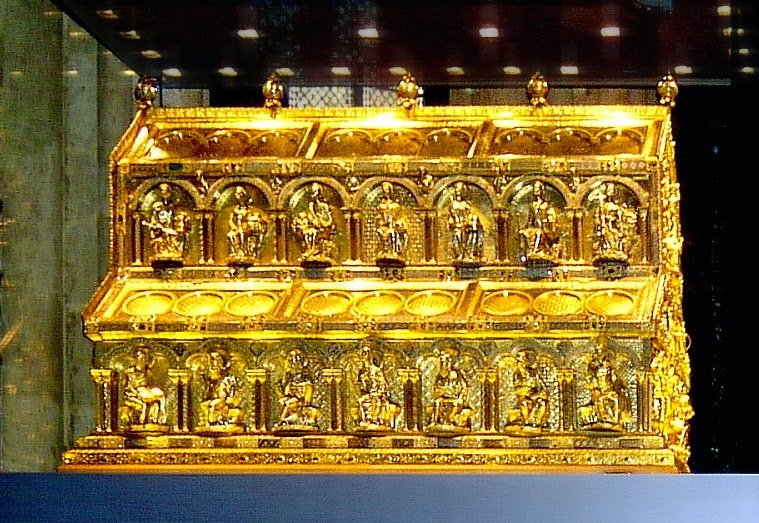 The Shrine of the Magi in Cologne Cathedral, perhaps the largest Medieval reliquary ever made. The remains believed to be those of the Magi were removed by Emperor Frederick from Milan, and gifted to the Bishop of Cologne. Photo: Arminia (licensed under GNU).

Together with King Philip Augustus of France, and King Richard I of England, Frederick launched the Third Crusade in 1189. Frederick would not live to see either the partial successes, or the ultimate failure, of the crusade: he drowned in the River Saleph (now the River Goksu) in Turkey in June 1190. 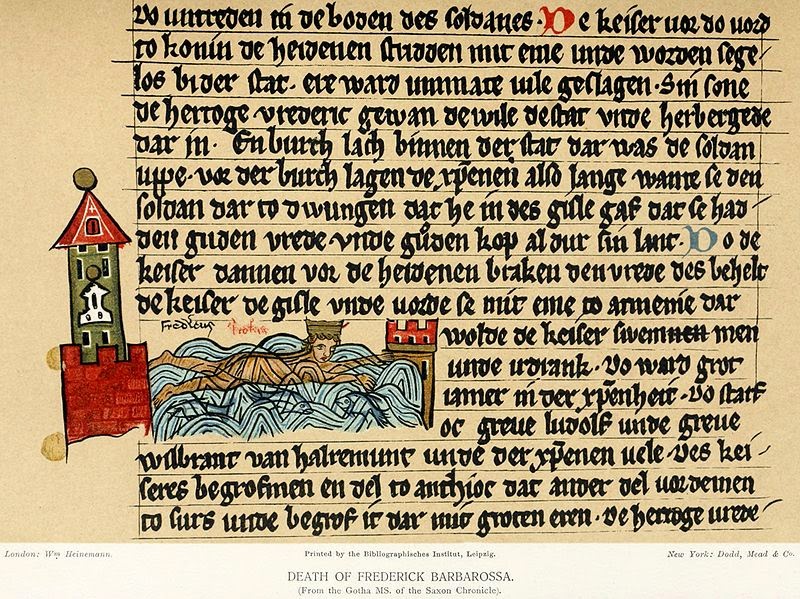 The death of the Emperor Frederick, as depicted in the Gotha MS of the Saxon Chronicle. Image is in the Public Domain.

Umberto Eco's novel, Baudolino, begins fourteen years later, with the sack of Constantinople by the forces of the Fourth Crusade. An Italian knight, Baudolino, rescues the (historical) Byzantine administrator, Niketas Choniates, and conveys him to safety in the house of a Genoese merchant.

The sack of Constantinople, as depicted in "La Conquete de Constantinople," by the 14th Century chronicler, Geoffreoy de Villehardouin. Image is in the Public Domain. 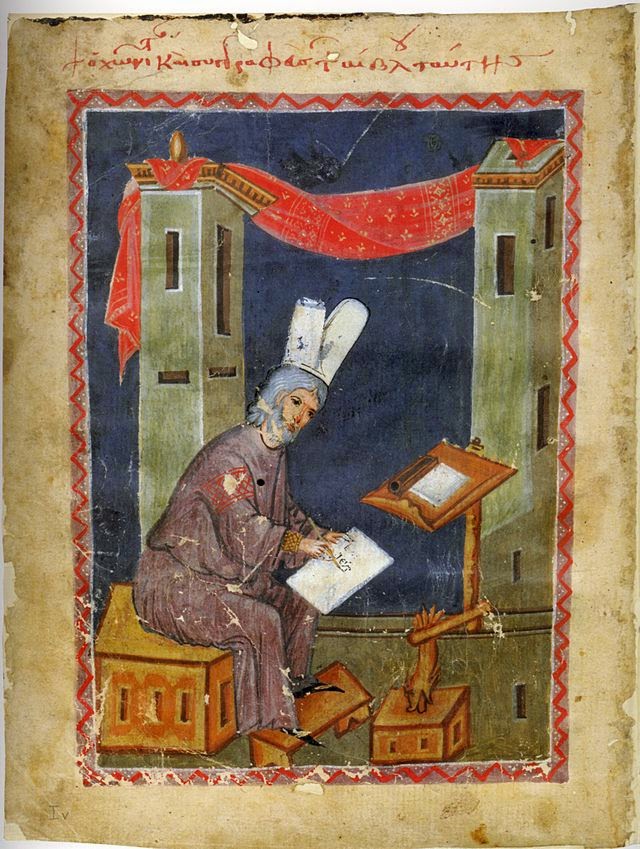 The Byzantine administrator and historian, Niketas Choniates, as depicted on a manuscript owned by the National Museum of Austria. Image is in the Public Domain. 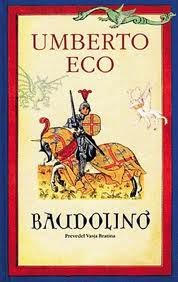 Baudolino proceeds to tell Niketas the story of his life: how he was born to a peasant family; how, during the course of a war, he encountered a stranger who was lost in a forest, a stranger who turns out to have been the Emperor Frederick; how Frederick adopted him, had him educated at Paris, and how he later became a trusted minister at Frederick's court, accompanying him up to the moment of his death. He tells, also, of the journey that he subsequently made to seek out the mysterious kingdom of "Prester John," and of the strange creatures he encountered along the way.

"At the edge of the clearing the grasses finally parted, and a creature appeared, thrusting the ferns aside with his hands, as if they were a curtain. Hands they certainly were, and arms, those of the being coming towards them. For the rest, it had a leg, but only one. Not that the other had been amputated; on the contrary, the single leg was attached naturally to the body, as if there had never been a place for another, and with the single foot of that single leg the creature could run with great ease, as if accustomed to moving in that way since birth ..." 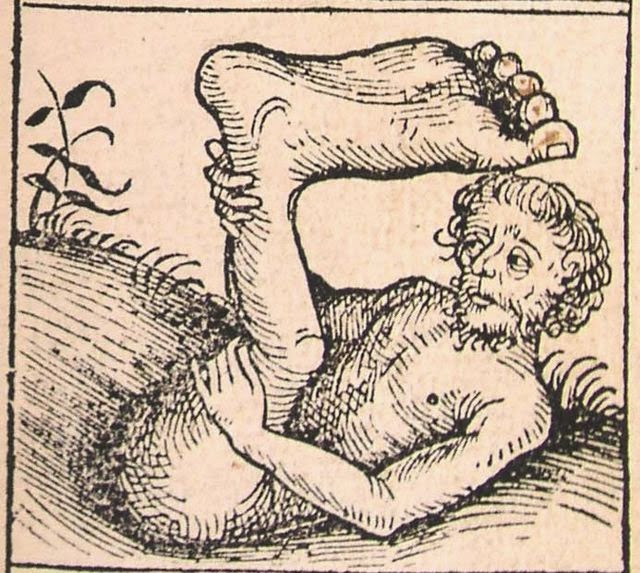 A skiapod, as depicted by Hartmann Schedel (1440-1515) in the Nuremburg Chronicle. Image is in the Public Domain.

"They could tell that the city was active and populous from the crowds that animated what were not the streets and squares but, rather, the spaces between peak and spur, between massif and natural tower. It was a multi-coloured crowd, in which dogs and asses mingled, and many camels ... some with one hump, others with two, and still others even with three. They saw also a fire-eater, performing before a cluster of inhabitants whilst holding a panther on a leash. The animals that most surprised them were some very agile quadrupeds, trained to draw carts: they had the body of a foal, quite long legs with bovine hoofs, they were yellow with great brown spots, and, above all, they had a very long neck surmounted by a camel's head with two little horns at the top. Gavagai said that they were cameleopards, difficult to capture because they fled very swiftly, and only the skiapods could pursue them and rope them ..."

Baudolino is, by his own admission, a skilled and accomplished liar, and there are stories within stories, and lies within lies, in Eco's dazzling combination of history and myth. The fabulous creatures of Medieval manuscripts seem to leap off the page and, along the way, Eco provides fictional solutions to various historical conundrums, including the circumstances of Emperor Frederick's death, and the origins of the Shroud of Turin. At the end of the book, Baudolinio and his companions go their separate ways, each committed to telling his own story in his own way until, a companion of Niketas suggests, "a greater liar than Baudolino" comes along to tell the story afresh.

Mark Patton's novels, Undreamed Shores, An Accidental King and Omphalos, are published by Crooked Cat Publications, and can be purchased from Amazon UK or Amazon USA.
Posted by Mark Patton at 05:00