By the middle of the 1st Century AD, Rome was at the centre of an empire that encompassed the whole of the Mediterranean world, extending northwards as far as Britain, and southwards along the valley of the Nile into the interior of Africa. Rome itself was a cosmopolitan city, in which Britons, Gauls and Germans jostled with Carthaginians, Greeks and Judeans, all bringing with them their own languages, traditions and gods. A city of many gods and many temples could easily accommodate new religions, so long as they did not interfere with one another, or with the management of the state.

The presence of a Jewish community in Rome itself is attested from the 3rd Century BC, and thirteen synagogues are mentioned in inscriptions, some of which enjoyed the patronage of senior Roman figures such as Augustus and Marcus Agrippa. Only one such synagogue has actually survived in the archaeological record, in the port community of Ostia, an establishment that seems to have continued in existence over several centuries. 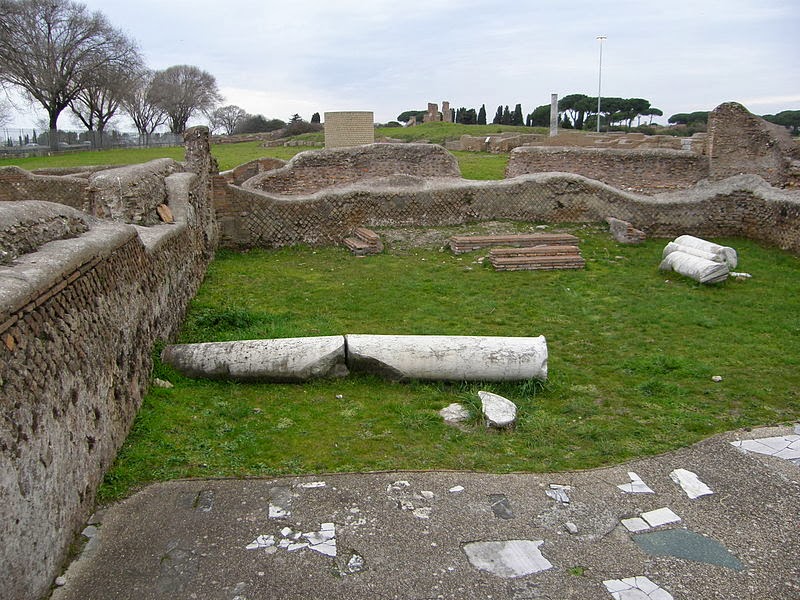 The synagogue at Ostia. Photo: Makaristos (licensed under CCA). 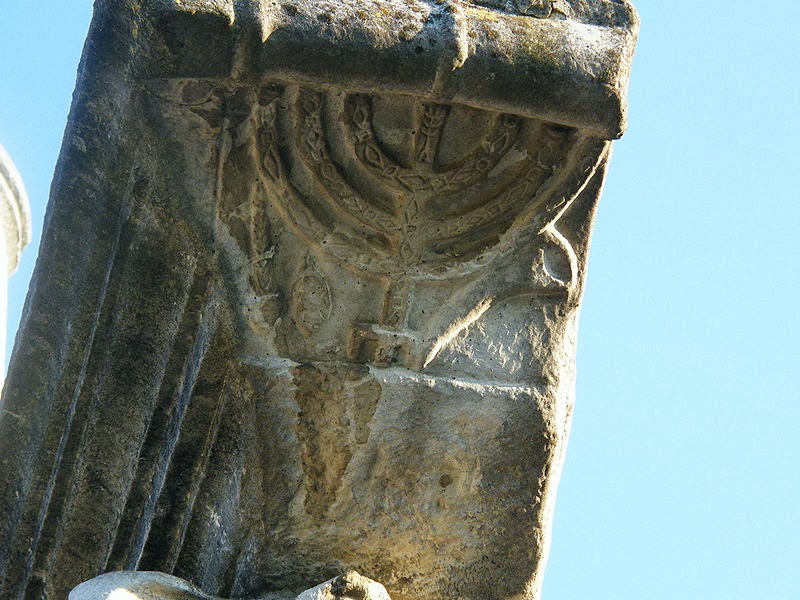 Relief from the synagogue at Ostia. Photo: Setreset (licensed under CCA).

The relationships between the Jewish community and the Roman authorities were not always harmonious. Jewish religion, with its monotheistic claims, sat uneasily alongside Roman polytheism, and was singled out for suspicion whenever trouble was brewing in the province of Judea. In 19AD, the Emperor Tiberius expelled both Jews and worshippers of Isis from Rome, perhaps because they were seeking and gaining converts among slaves and freedmen. The "expulsion" seems not to have been wholly successful, because further action was taken some three decades later by the Emperor Claudius, against Jews who had (according to Suetonius) been "causing disturbances at the instigation of Chrestus" (impulsore Chresto). Is this, as many have supposed, a reference to Christ (occurring after the crucifixion), or is this "Chrestus" another figure, about whom nothing else is known? If it does refer to Christianity, the implication is that the Romans made no clear distinction between Christians and Jews, and may have assumed "Christ" to have been a living agitator rather than a martyred founder.

It is unclear at what stage the Christian community became an identifiable minority in Rome. Most of the contributors to one of the key academic texts, edited by Karl Donfried and Peter Richardson, consider that this happened, at the latest, in the Principiate of Claudius (41-54 AD), but a mocking graffito showing a man worshiping a crucified donkey, and the Greek inscription, "Alexamenos worships his god," could date anywhere between the 1st and the 3rd Century AD. 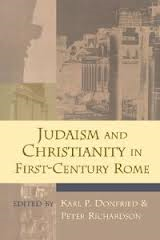 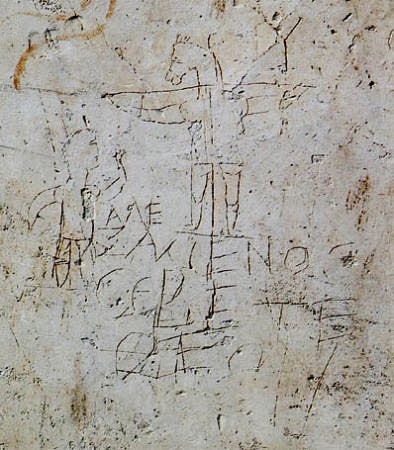 The Alexamenos Graffito. Photo: Bbltype (image is in the Public Domain).

A more certain reference is to be found in Tacitus's Annals, in relation to the great fire that destroyed Rome in 64 AD, during the Principiate of Nero. Nero identified the Christians as arsonists, and instigated persecutions against them (almost certainly the persecutions that claimed the lives of Saints Peter and Paul). Tacitus is clear about the fact that "Christus," who gave the sect its name, had lived in Judea, and had been executed during the Principiate of Tiberius, on the orders of the Procurator, Pontius Pilate.

We know the names, even if we know little else, of some of Rome's earliest Christians. St Paul's Epistle to the Romans, which most scholars date between 55 and 58 AD, mentions a Jewish couple, Priscilla and Aquila, tent-makers who had settled in Rome and were subsequently expelled by Claudius. 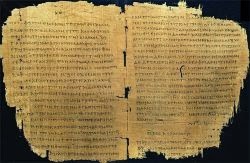 A manuscript copy of St Paul's Epistle to the Romans. This is an ancient copy, the original does not survive.

They are mentioned, also, in Acts 18 and Corinthians 16, and make a brief appearance as minor characters in my novel, An Accidental King. Tacitus, in his Annals, also mentions Pomponia Graecina, the wife of Britain's first Roman governor, Aulus Plautius, who was accused of adherence to a "foreign superstition" (which could be either Judaism or Christianity or, conceivably, the cult of Isis) and tried and acquitted by her husband. According to some interpretations, she is the Christian Saint Lucina (possibly her baptismal name), who endowed Rome's Christian community with one of its earliest catacombs for the burial of the dead. 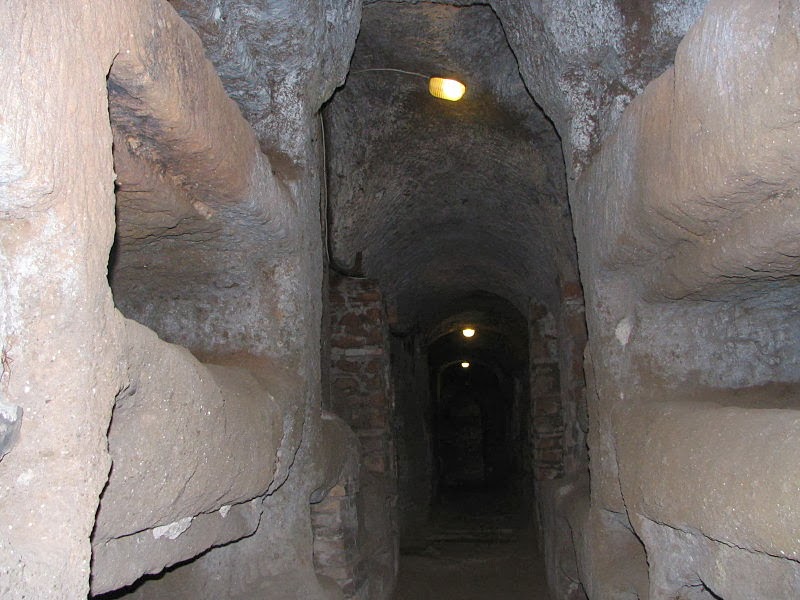 The Jewish historian, Josephus, suggests that Christianity had a particular following among slaves and freedmen, and the sacking of Jerusalem by Vespasian and Titus in 68 AD, graphically portrayed on reliefs on the Arch of Titus, almost certainly brought large numbers of Jewish people to Rome as slaves. Over the decades that followed, some of these people probably remained true to the faith of their forbears, whilst others converted to Christianity and others still became assimilated to the Roman population, but their descendants may have changed Rome in ways that neither they nor their captors could have predicted. 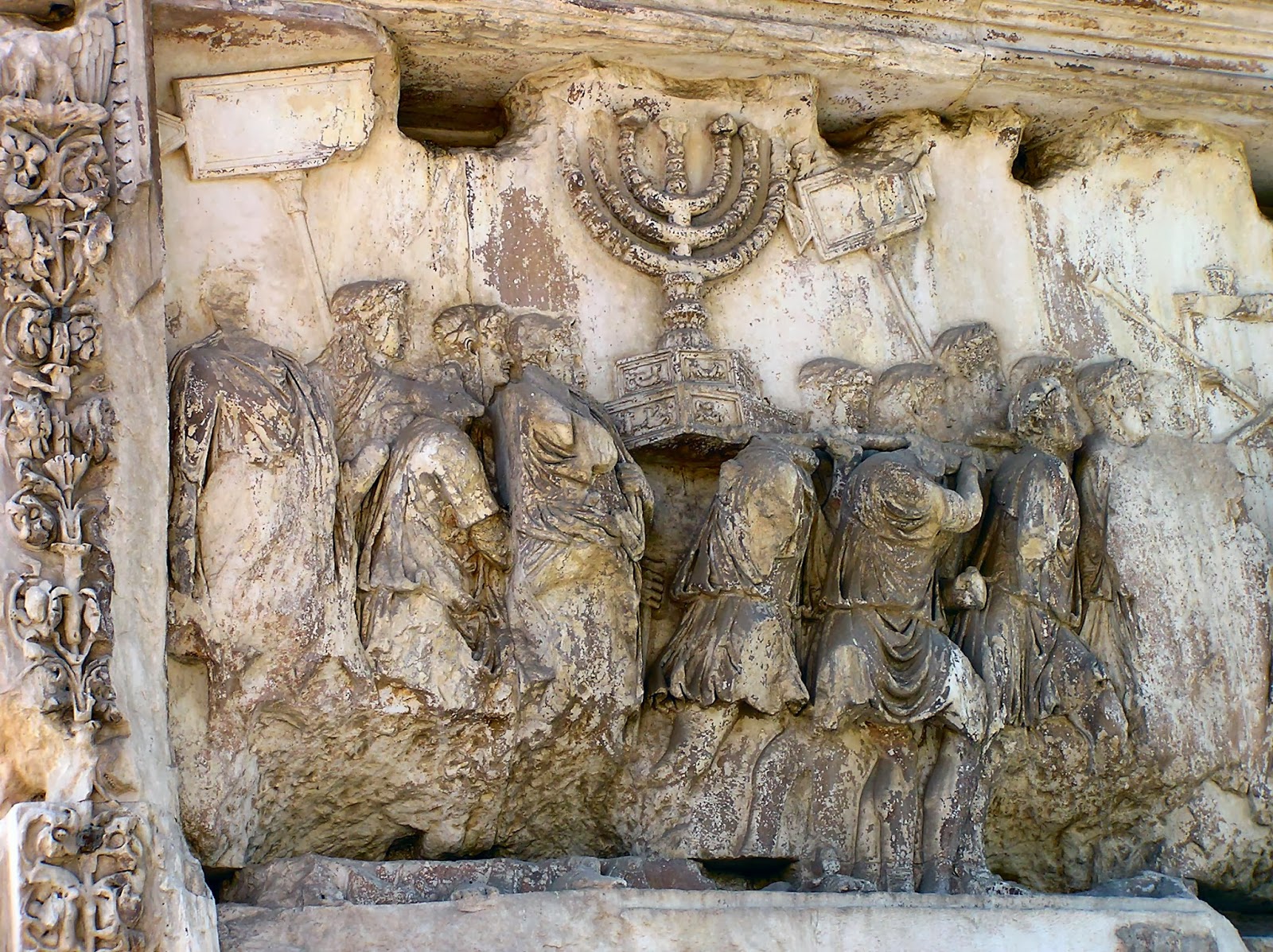 The Triumph of Vespasian and Titus, as depicted on the Arch of Titus. Photo: Gunnar Bach Pedersen (image is in the Public Domain).

Mark Patton's novels, Undreamed Shores, An Accidental King, and Omphalos, are published by Crooked Cat Publications, and can be purchased from Amazon.
Posted by Mark Patton at 03:25