Visions of Messenia: A Corner of Ancient Greece in Modern Fiction and Poetry

There are two common misconceptions that tend to intrude upon our consciousness whenever we think of ancient Greece. The first is to think always in terms of urban life, and the second is the exclusive focus on a small number of very powerful cities: Athens; Sparta; Corinth; Thebes. In fact, there were between 1000 and 2000 Greek city states (not all of which were located on the modern territory of Greece - the Greek world, even before the time Alexander the Great, extended from Cyprus in the east to southern France and northern Spain in the west) and, within the territory of each of these, more than 90% of the population lived in rural districts, making their living from the soil, as described by Hesiod in his Works and Days.

Messenia, in the southern Peloponnese, was one such polity, which retained its distinctive identity down the centuries despite the pressure exerted on it by its large and aggressive neighbour, Sparta. Far from the modern tourist trail, Messenia is best-known today for its olive-groves, in which the prized Kalamata olives are produced. 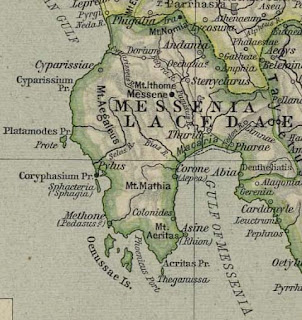 Messenia, as shown in William R. Shepherd's Historical Atlas. Perry-Calameda Library, University of Texas at Austin (image is in the Public Domain). 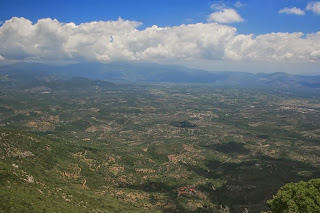 The Plain of Messenia from the top of Mount Ithome. Photo: Stefan Artinger (licensed under CCA).

History records a number of successive wars and uprisings in which the Messenians, sometimes allied to the Athenians, at other times to the Thebans, asserted their independence over their Spartan overlords. The famous statue of Nike (Victory) at Olympia, by the sculptor, Paeonius, was commissioned by the people of Messenia, and their Naupactian allies, to celebrate their victory, with Athens, over Sparta in 425 BC. 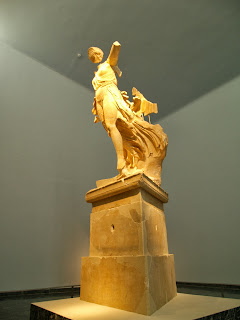 Paeonius's statue of Nike at Olympia: Photo: Wikipedian pufacz (image is in the Public Domain).

More important to the Messenian consciousness, however, was the revolt led by Aristomenes, earning seventeen years of freedom for the Messenians between 685 and 668 BC.

T.E. Taylor's recently published novel, Zeus of Ithome (Crooked Cat Publications) focusses on a later uprising in the 4th Century BC. Its protagonist is a young Messenian peasant, Diocles who, having fallen foul of a Spartan death-squad, the Krypteia, is forced to take refuge in the mountains. There he meets a latter day Aristomenes, who may or may not be a descendent of the folk-hero, but certainly keeps alive the tradition of his courage and endurance. Under his tutelage, Diocles travels first to the Oracle of Delphi, and then on to Thebes, where he is taken under the wing of Epaminondas, the leading statesman of his day. It was Epaminondas who, in 371 BC, invaded the Peloponnese, expelling the Spartans from Messenia and establishing the city of  Messene, the ruins of which can be seen to this day. 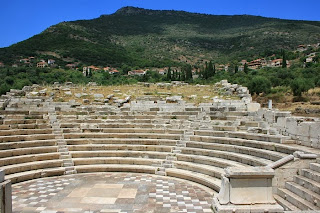 The theatre of Messene, with Mount Ithome in the background. Photo: Stefan Artinger (licensed under CCA). 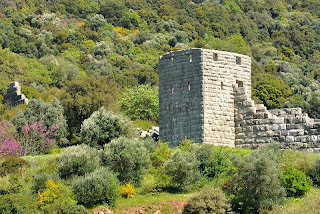 The walls of Messene. Photo: Dimkoa (image is in the Public Domain).

In Taylor's novel, the whole of this story is told through the eyes of Diocles (a fictional character) and those closest to him. This is where fiction truly comes into its own, since history rarely has anything to say about the lives of such people.

Kelvin Corcoran's For the Greek Spring (Shearsman Books) is a collection of poetry inspired both by modern Greece (the influence of the Greek modernist poet, George Seferis, is palpable in its verses) and by its own consciousness of its roots in a distant past. The title of Corcoran's volume is, one suspects, deliberately provocative, inviting comparisons between the "Arab Spring" and the more recent economic turmoil visited upon Greece as a result of factors beyond the control of all but a tiny minority of her people. This is thrown into sharp relief by those passages of Corcoran's poetry which focus on Messenia, and specifically on the enduring folk-memories of Aristomenes:

"I am Aristomenes of Andania and I will tell you everything,
what I did and did not do, how I invented the moment of decisive action,
the birth of fear which clears a field of men, Messenia of Laconians ...
... What in the world would make me leave my village?
The buzz of bees, my olives fattening like black jewels,
the wagtail patrolling my patch in familiar light,
though the wind plays naughty in the Stenyklaros Valley."

At times, Corcoran mixes ancient and modern imagery to create a sense of a region and a people who have always struggled to hold their own course, buffeted by the winds of a history that is made elsewhere; whilst at others he both celebrates and mocks the "mysteries" that underlie the stories which sustain that region's people.

"And then a morning so fresh
like a massive wet diamond
suspended above the white sea
with the tatty mimosa blowing and
the container ships stuck on the water
we went off around Taygetos
tottering and twisting in the air."

"As for the mysteries, like a snake even nonsense bites, mock as you might;
the matter of my birth is secret, what I buried on Mount Ithome is not,
who knows what happens if you sleep in the narcotic shade of the fig?
the old goddess may arise a girl, trees thicken, the stream run fresh."

Even allowing for the influence of literary modernism, it is in the nature of prose fiction that it must reveal more than poetry does. Taylor must tell the stories that Corcoran only hints at, however aware he is that his telling of them represents only one among many possible narratives.

Between them, however, these two works shine a light on a corner of ancient Greece (and, by extension, on some of the nooks and crannies of our shared humanity) that is easily missed in the grand narratives, both ancient and modern, that have always dominated our understanding of it. 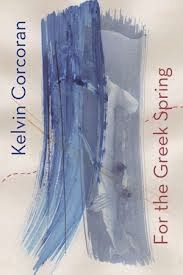