I am very pleased to visit today, and especially so given that you introduced this post so well last week. Your topic, The Brigantes, is a particular passion of mine, as anyone who has read The Beltane Choice will know. I've blogged in other places, over the last few years, about why I chose to write about the northern Celtic tribes, specifically the Brigantes and Selgovae, the main reason being that I personally have come across very few novels set in northern Britannia around 71 AD. Those I have read tend to focus on the rule of Queen Cartimandua and her husbands, but I wanted to write about the lives of ordinary people. For the plot of The Beltane Choice, I focussed on the threats and advances that Rome made into Brigantian territory during the time that Quintus Petilius Cerealis Cesius Rufus was governor.

However, I have to admit that, even whilst writing The Beltane Choice, some of the evidence I read was confusing (Tacitus, other classical historians, the revised interpretations of modern scholars). The timescales of Roman activity in northern climes did not entirely make sense to me when plotted against the actions I wanted my fictional characters to take. The most recent archaeological evidence seemed to cast doubt on which governors of Britannia should be credited with fort-building, and Roman expansion into northern Brigantia and, indeed, into the Celtic territories of present day Scotland. I am writing fiction, and many would say that being a year or two out shouldn't matter when writing about events which possibly took place some two thousand years ago. My desire for historical accuracy, however, comes to the fore in such situations. The timescale of events in my own novels has to make sense to me!

The duration of writing books two and three was lengthened, as I delved more and more to find satisfactory answers to the questions I had set myself. Apart from the more obvious military subjugation of the native Celtic peoples, what was the real profit for the Roman Empire in conquering the whole island of Britannia? In a nutshell, what made it worthwhile for Gnaeus Julius Agricola, as Governor of Britannia (78-84 AD), to expend the resources of Rome to march his troops all the way to the northernmost parts of what we now call Scotland?

During the Flavian period, the military concept of conquering the then-known world  - Britannia being the westernmost large land mass - is easy for me to accept. I can see the attraction for the emperor in placing his foot on every piece of Britannia's soil. Keeping the native British tribes at peace was another good reason, but how did it all add to the wealth of the empire?

Apart from the military and political clout of conquest, I felt that there had to be some other reason for claiming this territory. Was it the natural and human resources that Rome sought to acquire? It wasn't easy to find detailed information, but I found enough to spark my imagination. Resources became an important focus in After Whorl - Bran Reborn, and even more so in the third book, After Whorl - Donning Double Cloaks.

I already knew that the southern parts of England were highly prized for their cereal cultivation, and that supplies shipped to mainland Europe helped to feed Roman troops in Gaul and Germany. There was much sense in acquiring fertile land, but what of the less hospitable parts of the island of Britannia? Much of northern Britain is not well suited to cereal cultivation, so what was the attraction? 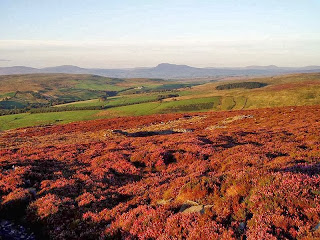 The heather moor of Clogha, Lancashire, at the heart of Brigantian territory. Photo: BLISCO, licensed under GNU.

I'd read that the northern Celts were sheep-farmers, whose main breed was probably similar to the Soay sheep still farmed on some Scottish islands and Welsh hillsides. Would wool production have been lucrative enough to persuade the Emperor Vespasian to subdue the tribes of the north, gleaning profits to add to the Roman coffers? Perhaps this was part of the picture, but it seemed to me that there had to be more to it than this. 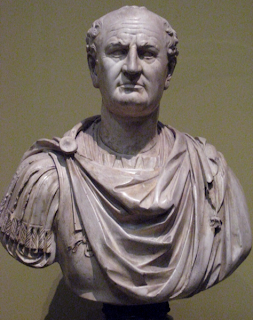 Major sea-trading didn't seem to have been established between Britannia and mainland Europe until after the period I was writing about. Did that mean that most of the resources purloined by the Roman army in the AD 70s and AD 80s were consumed by the Roman army stationed in Britain? Seasonal crops and farmed livestock were perishable, so that seemed an economically sound notion. 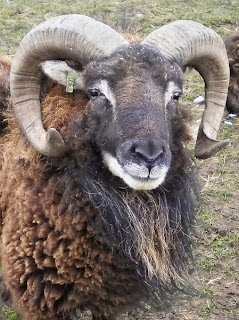 What other commodities did the Roman army in Britain need? What about leather for their tents, flasks and storage pouches? Some leather might have been imported from the Iberian peninsula, but I liked the idea that some was probably acquired locally, and wrote the leather trade into my novels. 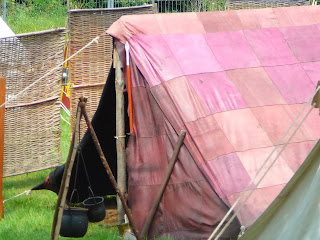 A reconstruction of a Roman army tent. Photo: Charlieeleven, licensed under CCA.

Metals? I found enough evidence to know that the Roman army used a lot of steel and other alloys for armour and weapons, which would have been very heavy to transport. Large quantities of iron were needed for the nails which went into the construction of the Roman forts. The towns and more developed forts would have needed lead for their sophisticated plumbing systems. Britannia had sources for all of these.

Roman fort building, leather and wool feature in After Whorl - Bran Reborn. The movement of metal features more in the third book, After Whorl - Donning Double Cloaks, where the action moves north from Brigantia into Scotland. Trade plays an important part in the plot, as do strategic and political considerations. Local tribal resistance to the dominance of Rome has not been forgotten, and remains a core part of the fervour of my novels.

I hope my readers enjoy the next two novels in my Celtic Fervour series, and appreciate my attempts to write about more than just the physical battles, although I must say I was overjoyed to take the action in my third novel all the way north to the Battle of Mons Graupius, which I have set in my own home area of Aberdeenshire.

My thanks, Mark, for inviting me here today.

Nancy Jardine lives in the fantastic "castle country" of Aberdeenshire in Scotland, with her husband. She spends her week making creative excuses for her neglected large garden; doesn't manage as much writing as she always plans, since she's on Facebook too often, but does have a thoroughly great time playing with her toddler granddaughter when she's supposed to be "just childminding" her twice a week. 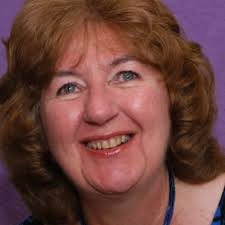 A lover of all things historical, it sneaks into most of her writing, along with many of the fantastic world locations she has been fortunate to visit. Her published work to date has been two non-fiction history-related projects; two contemporary ancestral mysteries; one light-hearted contemporary romance mystery and a historical novel. She has been published by The Wild Rose Press, and by Crooked Cat Publications.
Posted by Mark Patton at 15:48