The Road to Rome in the 1st Century AD

When I began the research for An Accidental King towards the end of 2007, I knew that I wanted to have my protagonist make the journey from Britain to Rome in 43/44 AD. There is no direct evidence that the historical Cogidubnus ever did so, but it seemed to me that a man such as the Emperor Claudius would hardly miss the opportunity of impressing his new ally by showing him the glories of the capital, and entertaining him there as only an emperor could entertain. He would almost certainly have travelled over land in at least one direction, since Roman fleets were effectively confined to port during the winter, even in the Mediterranean. This suited my purpose, in any case, since it would give him the chance to reflect on the scale of the empire and the nature of Roman power, even before he sees the glories of Rome itself. 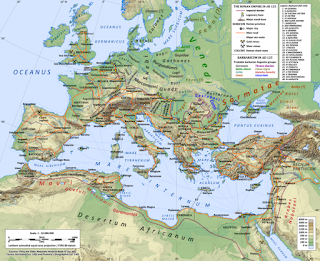 The Roman road network in Europe.

How would he have travelled? Probably by carpentum, a wooden vehicle with two or four wheels and pulled by two horses or asses. Almost certainly he would have been accompanied by a high-ranking civil or military official and, without doubt, he would have had a cavalry escort. 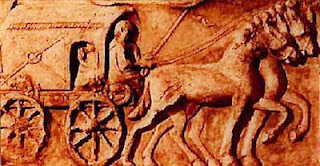 A contemporary illustration of a carpentum. 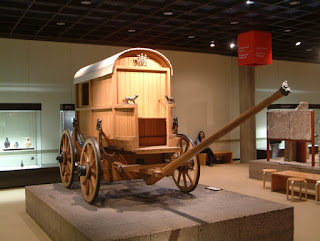 How long would the journey have taken? Horace suggests that a carriage could travel around 24 miles per day. The official courier service, the Cursus Publicus, could convey messages faster than this (upto fifty miles per day), but this was based on a relay system with the fastest riders using the fastest horses and changing them regularly (Ramsey 1925, Eliot 1925). Horace's estimate seems nearer the mark. Archbishop Sigeric, making the journey in 990 AD, lists eighty stops. Both Suetonius and Cassius Dio tell us that, when Claudius came to Britain at the time of the Roman invasion, he was away from Rome for six months and spent sixteen days in Britain. Two journeys, each of 80 days, plus 16 days in Britain, adds up to 176 days, which just about falls within the six months envelope, but Claudius might well have travelled back by sea, which would have been faster.

Where would they have stayed along the way? Along most of the major roads, mansiones were located  at regular intervals. These were part of the Cursus Publicus, and were used by the highest officials, including the emperor and his retinue, so they were well-appointed, typically with bath-houses, central heating and the obligatory stables so that horses could be changed.

There may, however, have been stages where there was no mansio, or days on which they might not make the distance from one mansio to the next, and then they might have to fall back on privately run cauponae, far less salubrious than mansiones, the walls often adorned with obscene grafitti that leave little doubt as to the range of services they offered. 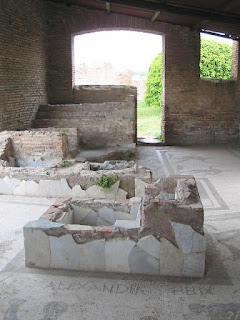 The Caupona of Alexander and Felix at Ostia (the structure in the foreground is believed to have been a bar. 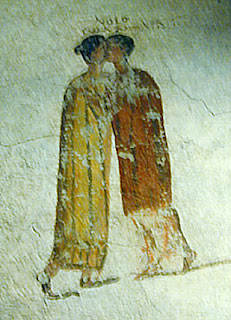 Painting from the Caupona of Salvius at Pompeii, probably intended to make it clear to clients that the serving girls offered other services on the side.

I made the journey myself in the week following Christmas 2007. I could not obtain a carpentum for the purpose, of course, and nor could I afford to take six months (or even three) out from the day-job, so I travelled by train, frantically scribbling my notes on the landscape, translating them from English to Latin and back to English again, trying to see the landscape as a Briton of the 1st Century AD might have seen it.

I arrived in Rome to learn of Benazir Bhutto's assassination and, beside the ruins of the Temple of Julius Caesar, found a woman weeping, seated on a stone. She asked me if I thought this was where Antony would have stood to give his funeral oration. I showed her where he would have stood (on the Rostra). She was, it turned out, an attache from the Pakistani Embassy. It was the only time in my life when I have ever sat upon the ground to tell sad stories of the death of kings.