The Song of Roland - The Making of a Medieval Myth

Many of the Medieval pilgrims making their way to Santiago de Compostela passed from France into Spain via the Pass of Roncesvalles, where, having crossed the Pyrenees, they could find hospitality at the local monastery, and where they would inevitably have been told (or, perhaps, heard sung) stories of a great battle that had been fought there several centuries before. 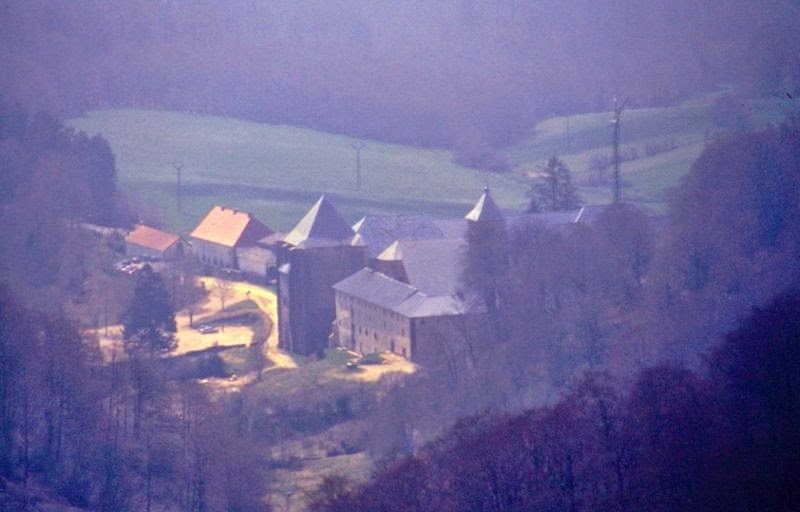 The monastery of Roncesvalles. Photo: Liesel (licensed under GNU).

According to these stories, the Christian Emperor Charlemagne had been campaigning against his Muslim enemies in Spain, and was returning into France, leaving behind a rear-guard under the command of his knight, Roland. Another of Charlemagne's lieutenants, Ganelon, was sent to conclude a peace with the Muslims, but he treacherously betrayed his Emperor, and told them where Roland's force was camped. Roland and his army were massacred but, with his dying breath, Roland blew his horn to alert the Emperor, who turned around and pursued the Muslims to the River Ebbro, where they were drowned. Ganelon was captured, tried, tortured and executed. 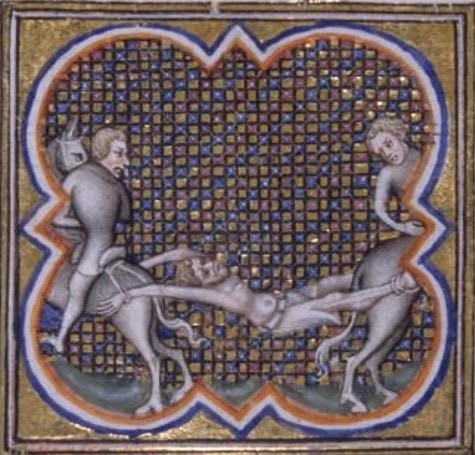 The torture of Ganelon, 14th Century miniature (image is in the Public Domain).

The pilgrims would even be shown Roland's horn, and a stone on which he had supposedly tried to break his great sword, Durandel, so that it could not fall into enemy hands. 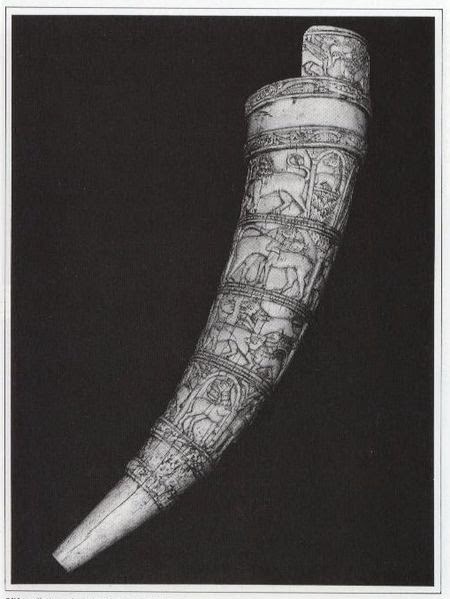 The "Horn of Roland." Photo: Gerald Gariton (licensed under CCA). 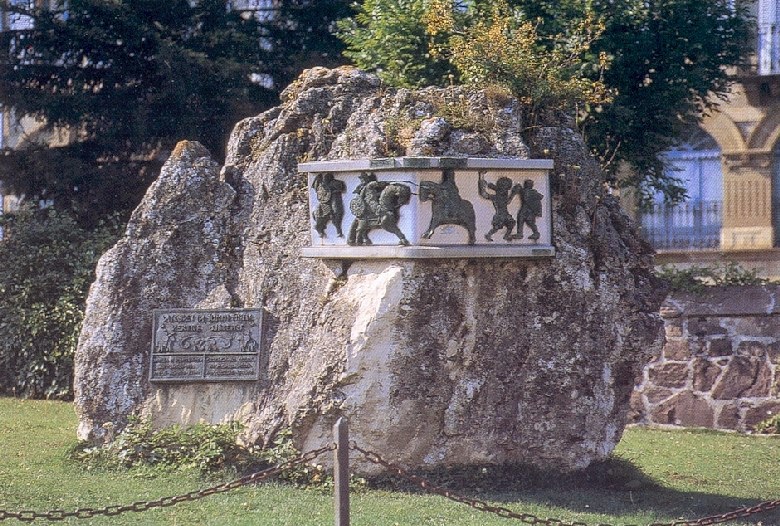 The "Stone of Roland" at Roncesvalles. Photo: Jaume (image is in the Public Domain).

There are several versions of the story in various languages (Latin, Anglo-Norman, High German, Dutch), including one that forms part of the Codex Callixtinus, the document that seems to have been used to train those who would guide the pilgrims along the route (this version was fraudulently attributed to Archbishop Turpin, a contemporary of Charlemagne, but was actually produced in the 12th Century). All of them have in common the theme of a "clash of civilisations," a battle between Christianity and Islam, and all have Ganelon as a villain who betrays both his Emperor and his God. 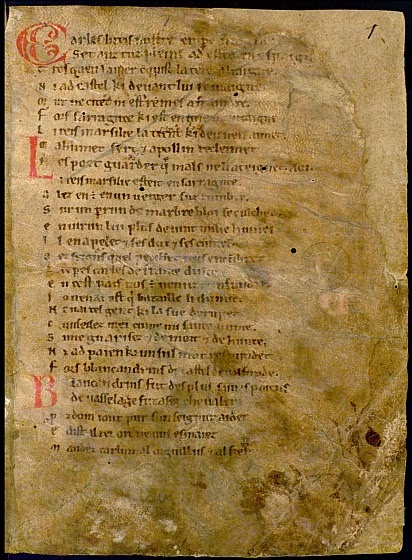 The first page of the Chanson de Roland - this 11th Century manuscript in the Bodleian Library (image is in the Public Domain) appears to be the earliest surviving version.

The historical truth seems to have been rather different. There really was a battle at (or near) Roncesvalles. It took place on the 15th August, 778 AD and, according to Charlemagne's biographer, Einhard, the rear-guard was indeed commanded by a man named Hroudlandus (Roland), the Prefect of the Breton Marches. Roland's force was ambushed, not by Muslims, but by Christian Basques. 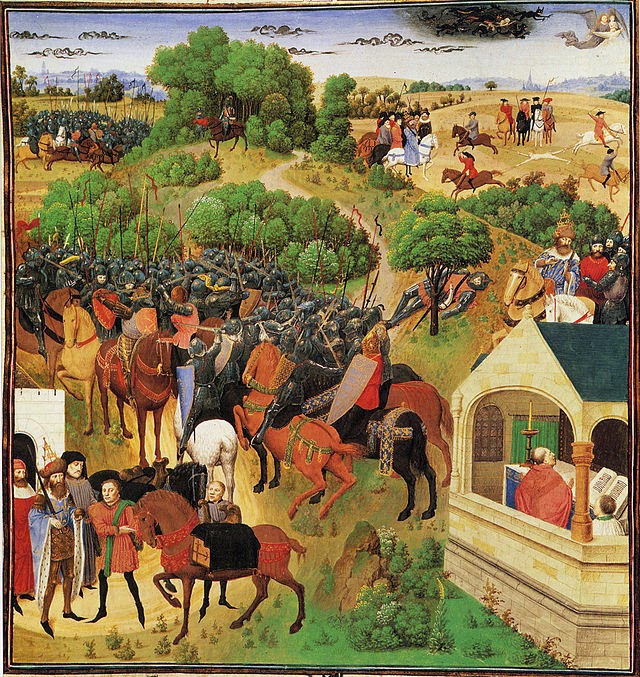 As far as the broader campaign was concerned, Charlemagne had been in alliance with the Abbasid Caliph of Baghdad, and fighting against the Umayyad Emir of Cordoba. Ganelon is not mentioned by Einhard (he is a fictional character, thought by some to be based on Wenilo, an Archbishop of Sens accused of treason by Charles the Bald in 858 AD). Far from the clash of civilisations related to the pilgrims, Muslims and Christians had been fighting on both sides. 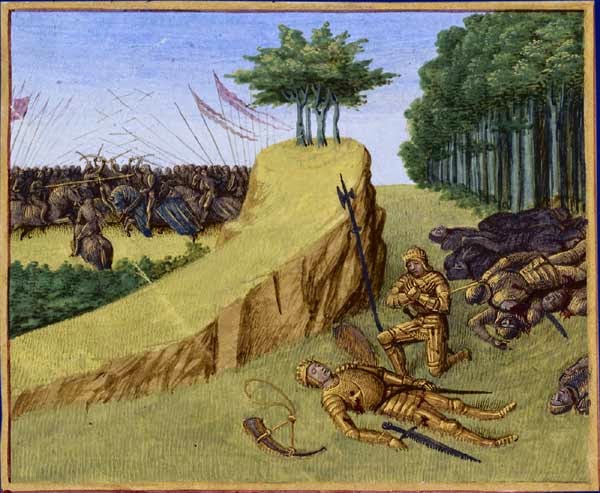 The Death of Roland, from a manuscript of 1455-60, Bibliotheque Nationale de France (image is in the Public Domain).

Historical truth, however, could not be allowed to get in the way of a good story, and this one would certainly endure. The legend of Roland became the centre-piece of "The Matter of France," one of the three great mythological cycles of Medieval European literature (the others being "The Matter of Britain," focussing on King Arthur and his court; and "The Matter of Rome," which proceeds from the fall of Troy and the flight of Aeneas to the founding of Rome).

Ganelon is mentioned in Chaucer's "Shipman's Tale," ("God take on me vengeance/as foul as evere hadde Genylon of France"), and in Cervantes's Don Quixote ("To have a bout of kicking at that traitor of a Ganelon, he would have given his housekeeper, and his niece into the bargain"). More recently, Le Chanson de Roland has been referenced by Graham Greene in The Confidential Agent, and by Stephen King in his Dark Tower series. Most disturbingly, however, it has probably contributed to the dangerous modern myth of an inevitable "clash of civilisations" between Christianity and Islam. Enjoy it as a story, folks, but don't confuse it with history! 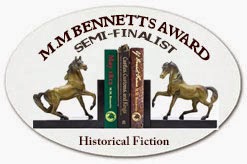