In 1682, France's King, Louis XIV, established a new court at Versailles, a bold and ambitious statement of his country's place in the world, and of his own. Over the course of a reign lasting more than seventy years, Louis established France's role as a global superpower, with decisive victories over both Spain and the crumbling Holy Roman Empire. He also set himself up as an absolute monarch, at the head of one of the most centralised states in the world. He evidently had the charisma to hold all of this together, but this in itself would pose a great challenge to the lesser men who would follow him.

The Palace of Versailles in 1668, by Pierre Patel (image is in the Public Domain).

The decades following the death of the "Sun King" in 1715 saw a great flourishing of intellectual life in France, with the publication of Diderot's Encyclopaedia in the 1750s, and the philosophical works of Montesquieu, Voltaire and Rousseau. The new spirit of rationalism and free thought embodied in these works would inevitably conflict with the Catholic authoritarianism of the Crown, and France faced other challenges: her involvement, first in the Seven Years War (1756-63) and the American Revolutionary Wars (1775-85) had left the country bankrupt. 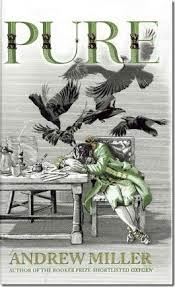 Andrew Miller's novel, Pure, is, in a sense, a book defined by what it is not about. It is not about the French Revolution, being set in the early 1780s, before the revolution begins, but the reader (unlike most of the characters) knows that it is imminent, and Miller's present tense narration gives a very clear sense of a society on the brink of catastrophe. We catch a brief glimpse of Camille Desmoulins, between the pillars of the Palais Royale (I doubt I would have recognised him had I not previously read Hilary Mantel's A Place of Greater Safety, which is here referenced directly, if obliquely), and we also get to make the acquaintance of a genial doctor by the name of Guillotin, but these characters are still very much in the process of becoming the people we now know them to have been.

The action begins at a Versailles that is already tangibly in decay:

"A young man, young but not very young, sits in an anteroom somewhere, some wing or other, in the Palace of Versailles. He is waiting. He has been waiting a long time. There is no fire in the room, though it is the third week in October, and cold as Candlemas ... The mirrors ahead of him, their surfaces hazed with dust (some idle finger has sketched a man's bulbous cock and next to it a flower that may be a rose), give out a greenish light as if the whole building were sunk, drowned."

The young man is an engineer, Jean-Baptiste Baratte, who has been summoned to a meeting with a minister. The minister has an assignment for him: he is to clear out and make clean the Cemetery of Les Innocents in Paris, a place infested with the stench of decay. All of the human remains are to be moved into catacombs (the cemetery and its clearance are historical - everything else is fictional). 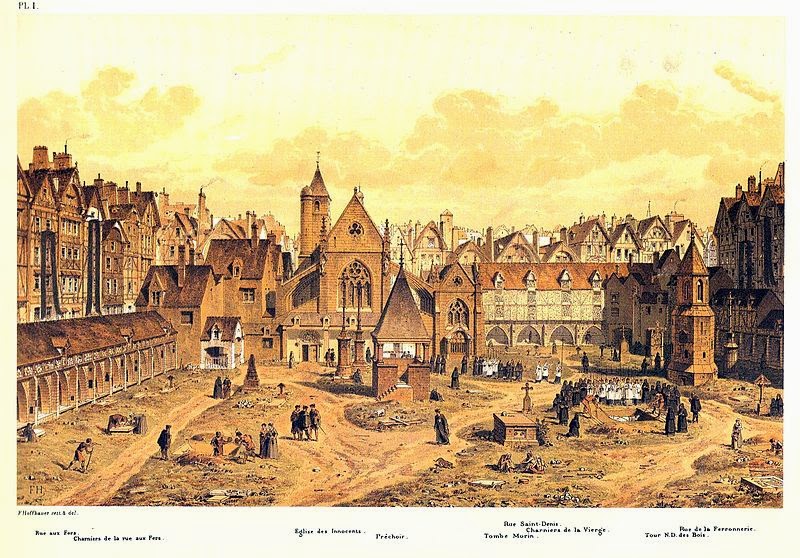 Les Innocents, around 1550, 19th Century engraving by Theodor Hoffbauer (image is in the Public Domain).

Baratte takes rooms in a house nearby, and finds that he has friends and allies in the local community, men like himself, "of the party of the future," but also opponents, those of "the party of the past," who feel threatened by change, and may even be prepared to kill to defend the only world they know. 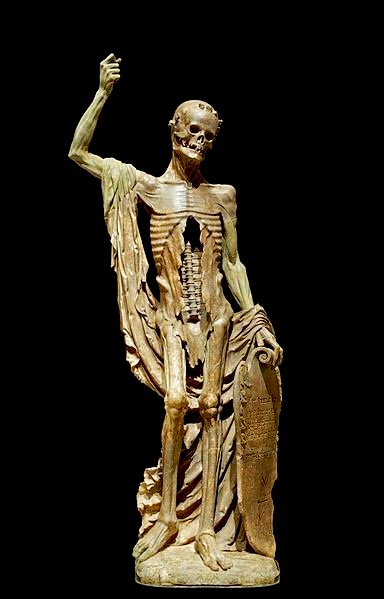 La Mort, Saint Innocent. The statue, dating to around 1530, was in the cemetery, but is now in The Louvre. Photo: Jebulon (licensed under CCA).

"There is nothing now between him and the night sky, nothing between him and the church of les Innocents, for surely that black hulk, just discernible against the eastern sky, is les Innocents ... if he were to climb over the bed and leap from the window, he would be in it, this place that is poisoning Paris! Certainly it is poisoning the Rue de la Lingerie. The stink that creeps through the open window he has already smelt something of in the breath of all the Monnards, in the taste of their food. He will have to get used to it ... "

Baratte never does quite get used to the stink, but he conscripts Flemish miners and sets to work. He is determined to play his small part in making this corner of Paris a better place, but something is in the air that is more pervasive even than the stench of physical decomposition. Graffiti appears on the wall of the cemetery: "FAT KING SLUT QUEEN BEWARE: BECHE IS DIGGING A HOLE BIG ENOUGH TO BURY ALL VERSAILLES." In fact, Beche (a nickname for Baratte) is simply getting on with his job, but we can only guess at what will become of him, and of the other characters, when events unfold themselves as we know that they shall. This is, for me, the ultimate novel of a time "pregnant with change." 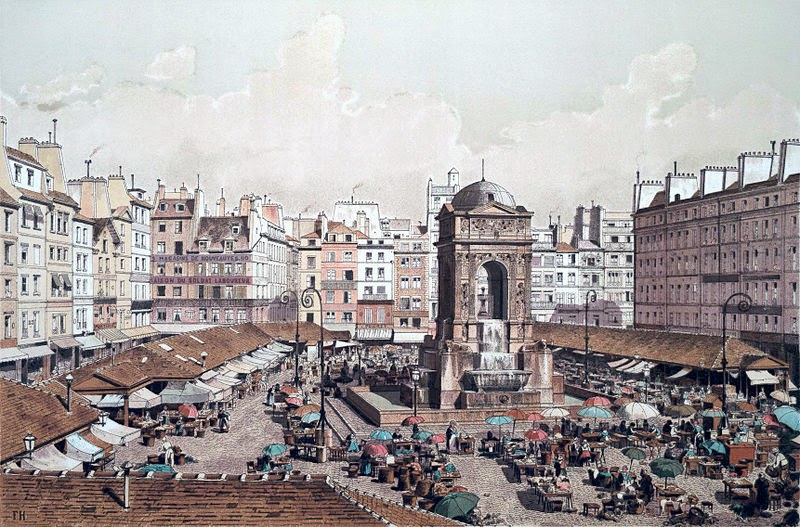 The Market of Les Innocents, set up on the site of the former cemetery, as depicted by Theodor Hoffbauer (Brown University, image is in the Public Domain). 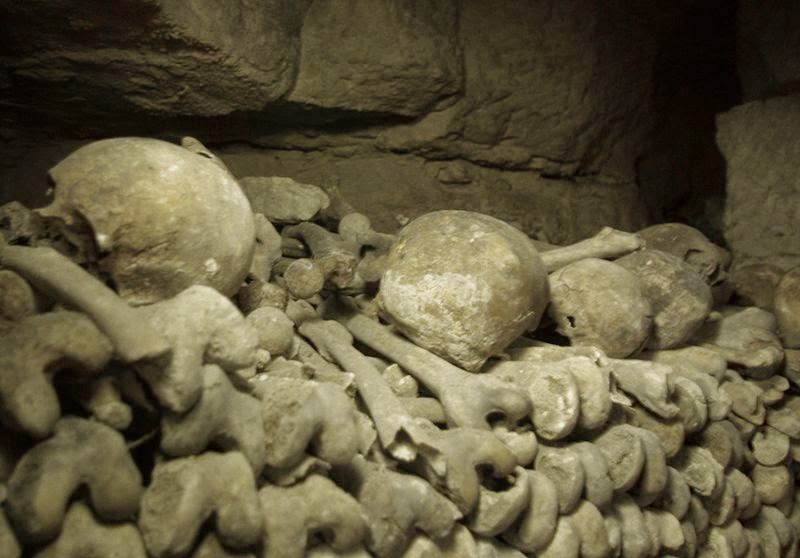 The Paris Catacombs, to which the human remains from Les Innocents were removed. Photo: Janericloebe (image is in the Public Domain).