Historical Fiction on the Stage: "Sly Movements in the Shadows"

"But turn away from the light of reason and you catch, out of the corner of your eye, sly movements in the shadows. They are faint, flitting archetypes: the fool and the sorcerer, the virgin and the whore. You can hear the wheel of fortune creaking, and the gods giggling behind their hands ... " Dame Hilary Mantel.

I recently had the pleasure of seeing the RSC productions of Mike Poulton's adaptations of Mantel's novels, Wolf Hall and Bring Up The Bodies, and last night, at a function organised by the Royal Society of Literature and Intelligent Life magazine, I saw Mantel in conversation with the actress, Dame Harriet Walter and playwright, Timberlake Wertenbaker, about (among other things) the relationships between fiction and drama. 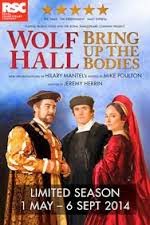 "In our time," Marguerite Yourcenar once wrote, commenting on her novel, Memoirs of Hadrian, "the novel devours all other forms; one is almost forced to use it as the medium of expression. This study of the destiny of a man named Hadrian would have been cast in the form of a tragedy in the Seventeenth Century, or of an essay, perhaps, in the period of the Renaissance."

This is very much a Francophone perspective, of course: in the English tradition it is more likely to have been cast in the form of a tragedy in the period of the Renaissance (Marlowe might have got around to it had he lived a little longer), and as a satirical poem in the later Seventeenth Century. Even allowing for this, however, the novel has never been the only literary response to the past. A few years ago I saw Dame Harriet in the Donmar Warehouse's production of Friedrich Schiller's Mary Stuart, and the tradition of the history play, which goes back to Shakespeare, has recently been given new life in Rona Munro's cycle "The James Plays" which premiered at the Edinburgh Festival this summer. 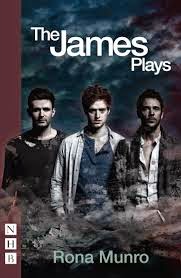 Nobody, of course, takes Shakespeare's history plays seriously as "history," and this seems to have rubbed off in the way in which the genre more generally is perceived. When I suggested, recently, to a friend that Arthur Miller's The Crucible could be seen as "historical fiction" in much the same way as my novel, An Accidental King, is historical fiction, his response was that I took the history itself far more seriously; that, for Miller, the historical context was simply a device for exploring modern themes (the McCarthyite "witch hunts" of 1950s America). 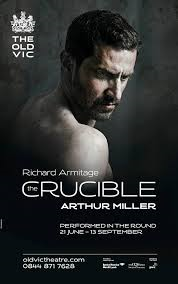 I was far from sure about this, having seen the play at the Old Vic earlier in the summer, and am even less sure now, having read Miller's essay "The Road to The Crucible." In it he describes his visit to Salem, the time he spent examining the original court records, the way he used these to shape the dialogue in his play, his tracing on the ground the footsteps of his characters:

"The tourists pass the books, the exhibits, and no hint of danger reaches them from the quaint relics. I have the desire to tell them the significance of those relics. It is the desire to write." 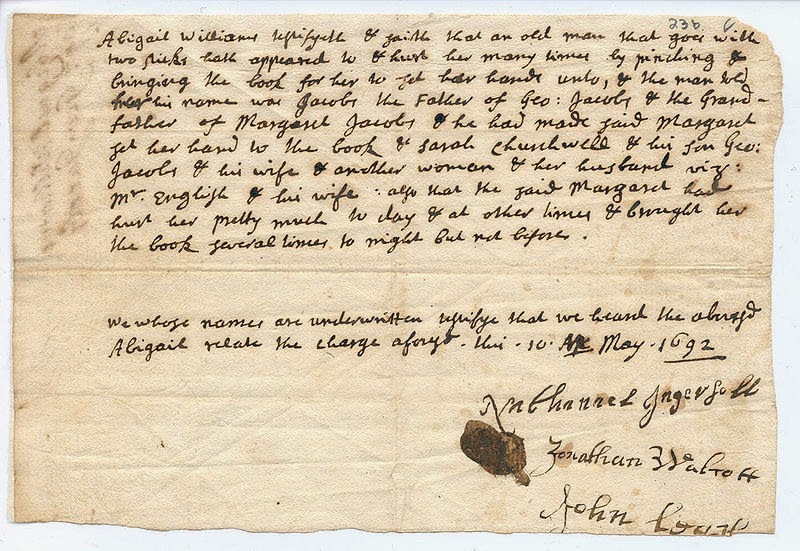 Abigail Williams's testimony from the Salem witch trials of 1692 (image is in the Public Domain).

That sounds very much like my own process of research and writing and, if Miller had the events of his own times in his mind as well, then so did I: An Accidental King was, in part, a response to 9/11 but, more importantly, it stems from a realisation that events in different periods reveal more profound truths about the human psyche and its interactions with the world of events.

Certainly Miller made some historical mistakes (I try to avoid them, as he probably did), and he also made some deliberate changes to the historical circumstances (changing the ages of some of his characters, for example, which I wouldn't personally do - but each writer must, in Margaret Atwood's phrase, negotiate their own compact with the dead), but his project does not seem to me to be so different from my own.

It remains the case, however, that whilst successful novels are often adapted for stage and screen, it is much less common for plays or films to be adapted as novels (there are plenty of novels about the Salem witch trials, but nobody has ever tried to adapt Miller's play). The novel does seem, pace Yourcenar, to be the default option when we seek an understanding of the past through stories.

Adapting a novel for the stage, as Poulton has done with Wolf Hall and Bring Up The Bodies, is a different enterprise from the writing of history plays such as The Crucible or The James Plays. The fictional world has already been created; the gaps that, in Mantel's words, history is "hiding in its sleeve" have already been filled by the novelist. There were certain passages in the novels that I struggled to imagine how they would transfer to the stage-script:

"The Cardinal's scarlet clothes ... cannot be wasted ... you will see a glimpse of them in a man's inner sleeve, or in the flash of a whore's petticoat ..." (Wolf Hall).

"His children are falling from the sky. He watches from horseback, acres of England stretches behind him; they drop, gilt-winged, each with a blood-filled gaze. Grace Cromwell hovers in thin air. She is silent when she takes her prey, silent as she glides to his fist ... " (Bring Up the Bodies).

In fact, Poulton makes no attempt to replicate either scene. Plays and novels are different things, and what works in one format does not work in another. In the first instance, the memory of Cardinal Wolsey is kept in the mind of the audience through the ghostly presence of the actor playing him at key moments during the second play (Thomas Cromwell, similarly, is constantly visible to the audience throughout both plays, even when he is not visible to the other characters on stage). In the second instance, Poulton has created an entirely different opening: the actor playing Thomas Wyatt comes on stage and recites a subtly modified version of the historical Wyatt's sonnet, Whoso lists to Hunt, I know where is an Hind.

"It is not easy to turn a novel into a play," Mantel tells us, "and it requires insight and technique that I myself could not have supplied. But I am happy to have been part of it. I'm not dispossessed of my novel. I'm not evicted; we're just moving to another part of the wood."