During the course of the 11th and 12th Centuries, a powerful new empire emerged in central Asia, that of the Seljuk Turks. Arising in the territories that now comprise Uzbekistan, Tajikistan and Turkmenistan, the Seljuks, under Sultan Alp Arslan, annexed Armenia and Georgia in the 1060s, and then embarked on a series of wars with the Byzantine Empire. By the middle of the 12th Century, the Seljuk empire stretched from the Hindu Kush to eastern Anatolia, and from central Asia to the Persian Gulf, giving its rulers effective control over the trade in silks and spices between China and India in the east, and Europe and north Africa in the west. New cities grew up along these trade-routes: Samarkand, Bukhara, Isfahan, Tabriz. 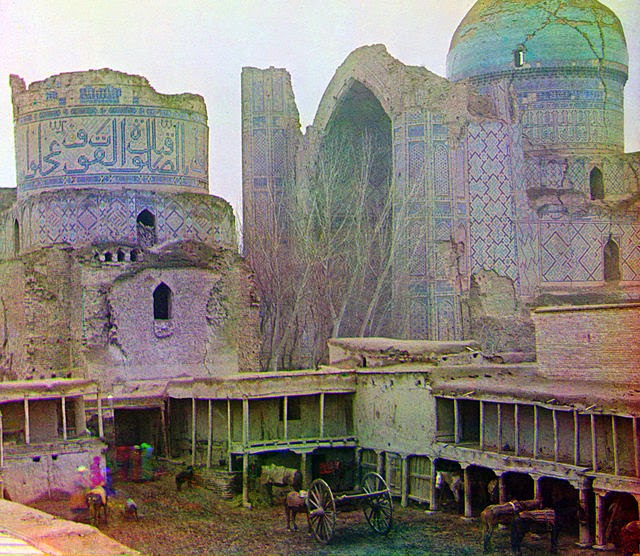 The Bibi Khanym mosque in Samarkand, photographed by Sergei Mikhailovich Prokodin-Gordskii in 1903 (image is in the Public Domain).

Sunni Islam was the religion of the empire's rulers, but, among their subjects were significant minority communities, including Shiites, various Sufi sects, Jews and Zoroastrians, giving rise to tensions that sometimes spilled over into violence. In the courts of the Seljuk rulers, however, medicine, mathematics and poetry thrived, in many cases building on the Hellenistic traditions that had flourished in the region since the time of Alexander the Great. 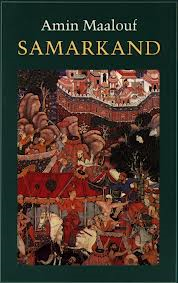 Amin Maalouf's Samarkand is, in effect, two related novels bound in a single cover. The first of these is spans the late 11th and early 12th Centuries, and is a fictionalised biography of the Persian poet, mathematician and philosopher, Omar Khayyam (1048-1131). Khayyam's poetry is notoriously difficult to translate, and history has recorded few biographical details, so the novelist has a good deal of flexibility in creating his character. 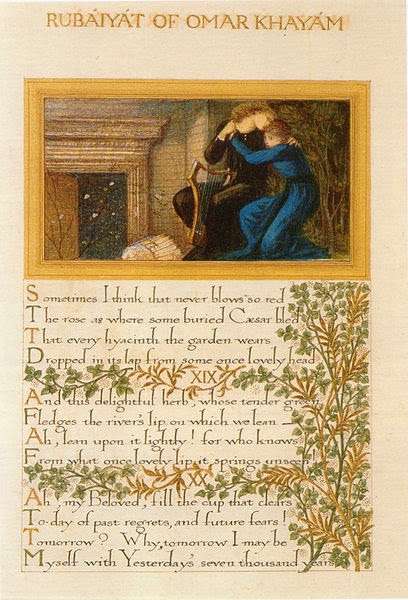 The Rubaiyaat of Omar Khayyam, as produced by William Morris and Edward Burne-Jones (image is in the Public Domain).

He is here presented as a man devoted to learning, whose advice is greatly valued by the most powerful men of his day, but who is, himself, wary of political power. Central to this characterisation is the passionate affair between Maalouf's Khayyam and a (fictional) woman poet of the Seljuq court.

"On a table under an awning of vine stood a long-necked carafe for the best shiraz white wine with just the right hint of muskiness and all around a hundred bowls burst into a riotous feast. Such was the ritual of a June evening on Omar's terrace ... A soft wind from the yellow mountains blew through the orchards in flower. Jahan picked up a lute and plucked one string and then another ... Omar raised his goblet and inhaled deeply ..."

This idyll, however, is not destined to last, for over it hangs the threat posed by Khayyam's one time friend, but ultimate nemesis, Hassan-i Sabbah, the leader of a fundamentalist sect.

In the second half of the novel, we meet the supposed author of the first, the (fictional) American orientalist, Benjamin O. Lesage, who visits Iran in the first decade of the 20th Century, in search of the original manuscript of Khayyam's Rubaiyaat, and is drawn into the country's Constitutional Revolution (1905-1911). 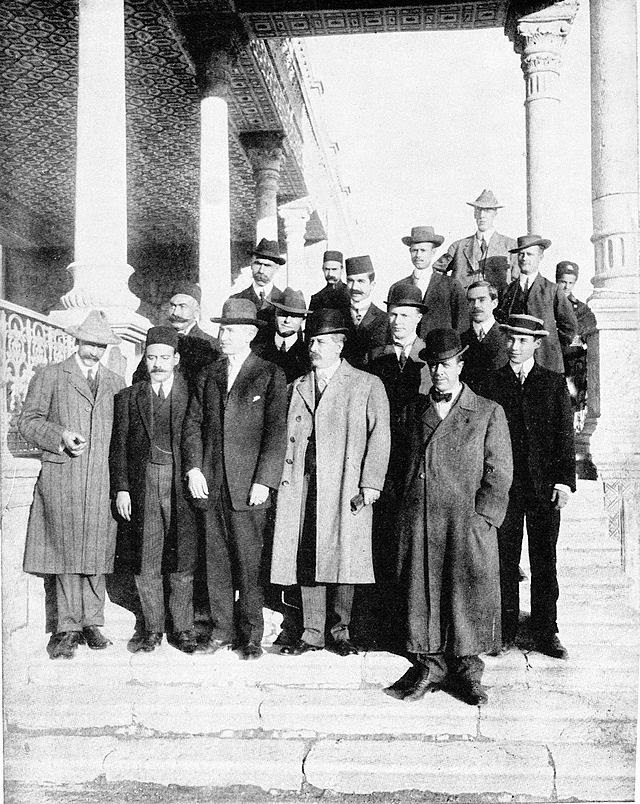 Morgan Shuster and his team of American financial advisers, appointed by the constitutional government of Iran in 1911, but subsequently dismissed in the face of diplomatic intervention by Britain, and military threats from Russia.

It is a time of hope both for the country, which has adopted a democratic constitution, and appointed a team of American advisers to manage the transition to modernity, and for Lesage personally, who not only finds his manuscript, but also meets the love of his life. Lesage's affair with Princess Shireen closely mirrors Khayyam's relationship with Jahan, but is similarly overshadowed by politics, as 20th Century Iran's infant democracy is strangled by Russian and British Imperial ambitions.

"It was a privilege to be present at the awakening of the Orient. It was a moment of intense emotion, enthusiasm and doubt. What ideas, both brilliant and monstrous, had been able to sprout in its sleeping brain? What would it do as it woke up? ... Shireen was jubilant: 'Last Friday,' she wrote, 'some young mullahs tried to raise a mob in the bazaar. They called the constitution a heretical innovation and tried to incite the crowd to march on ... the seat of the Parliament - but without success ...I can hardly believe it - fanaticism is dead in Persia.'"

From the outset, we know how the novel is going to end:

"At the bottom of the Atlantic there is a book. I am going to tell you its history. Perhaps you know how the story ends ... When the Titanic went down on the night of 14 April 1912 ... its most eminent victim was a book, the only copy of the Rubaiyaat of Omar Khayyam ..." 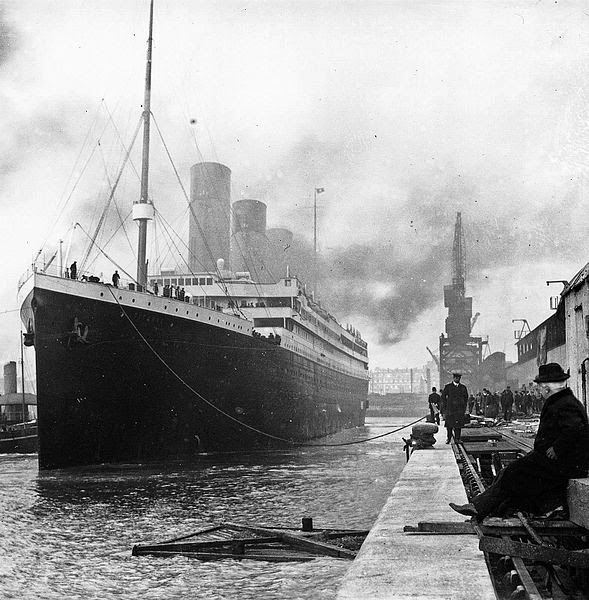 RMS Titanic at Southampton Docks (image is in the Public Domain).

Published in 1988, long before the toppling of Saddam Hussein and Muammar Gaddafi, or the disappointments of the 'Arab Spring,' Samarkand is a poignant and prescient novel, which gives a valuable historical insight into the origins of the conflicts between Asia and Europe; between Shia and Sunni; and between tolerance and fundamentalism; which have overshadowed the world for centuries, and continue to do so today.