Literate civilisation in China has its origins in the Shang Dynasty (c1200 BC) and, remarkably, the written characters of the period are still recognisable to modern readers of Chinese, making it the oldest surviving written language in the world.

From the time of Alexander the Great, who established a series of Hellenistic cities in the territory of what is now Afghanistan, a trade network existed, linking China and India to the eastern shores of the Mediterranean. This "Silk Road" was not a road in the sense that the Appian Way was a road, and nor was silk the only commodity traded along it (Indian spices, such as cumin & pepper, transformed the culinary culture of the Mediterranean world): it rather took the form of a series of understandings between chains of adjacent communities which collaborated on an informal basis to facilitate the transfer of goods and ideas. 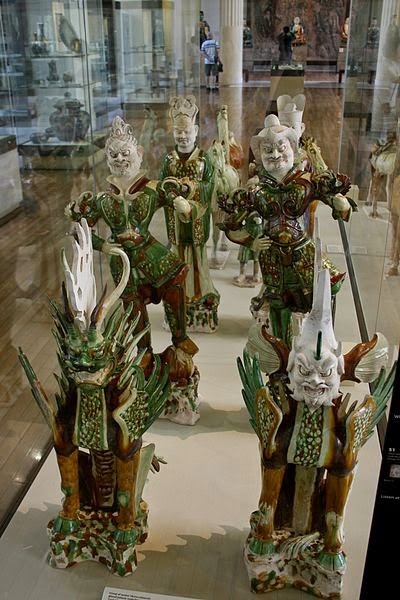 "Sancai" figures of the Tang Dynasty, c 728 AD, at the British Museum. Photo: Mike Peel (www.mikepeel.net) - licensed under CCA. Depicted are two guardian figures, two officials (one civil, the other military), two heavenly kings, two camels with an attendant, and two horses with an attendant.

In 629 AD, a Buddhist monk named Xuanzang left the Chinese capital, Chang-An (Xi'an) on a journey to India, with the primary aim of gathering Buddhist scriptures to return to China. His journey took him through Kyrgyzstan, Uzbekistan & Afghanistan (it is from his account that we have the first written record of the great Buddha statues of Bamyan, destroyed by the Taliban in our own times). 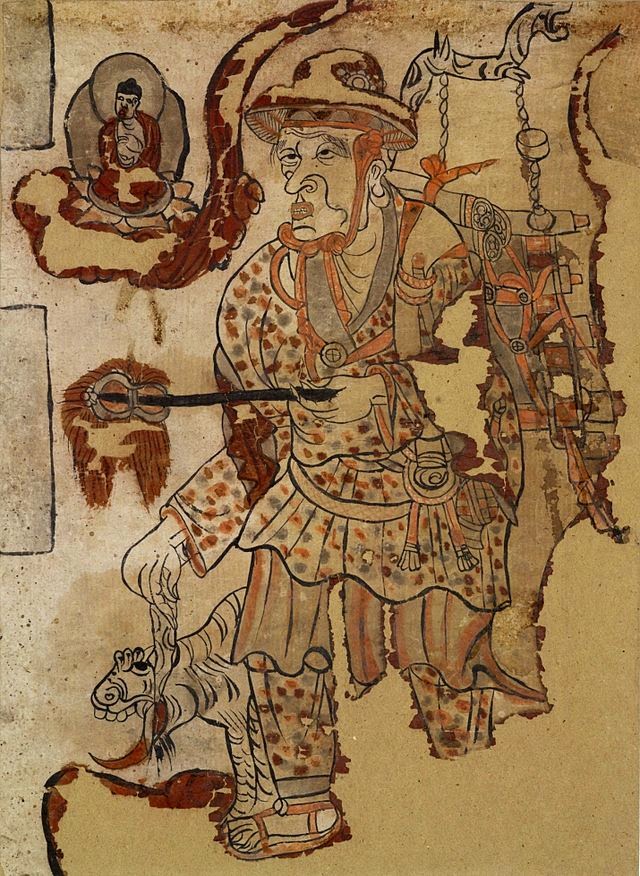 9th Century representation of Xuanzang, Dunhuang Cave (image is in the Public Domain). 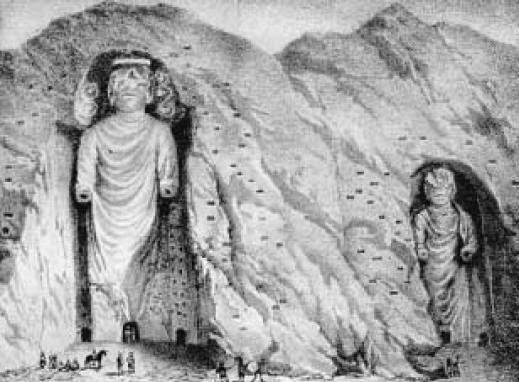 The Buddha statues of Bamyan, as depicted by Alexander Burns in 1832 (image is in the Public Domain). Xuanzang visited on 30th April, 630 AD, and recorded a third, reclining statue, subsequently lost.

Xuanzang arrived in India in 630 AD, and travelled extensively there, finally returning to Chang-An in 645 AD, where he joined the Da Ci'en Monastery, and led the building of the Wild Goose Pagoda to house the scriptures he had brought back from India. 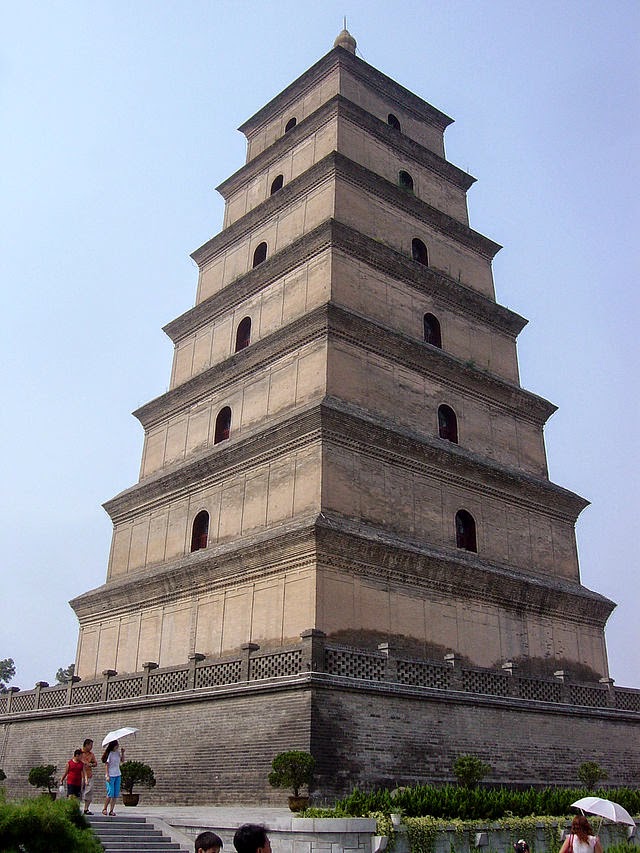 The non-fiction account of Xuanzang's journey, The Great Tang Records of the Western Regions, compiled by his disciple, Bianji, is standard reading for anyone writing about the Silk Road, but English translations of it are rare and expensive.

Wu Cheng'en's novel, written during the Ming Dynasty (1368-1644), takes Xuanzang's account as a starting point, but weaves a series of fantastical tales around it, in which Tripitaka (the name he uses for Xuanzang) is accompanied on his journey by a monkey-spirit (Sun-Wukong, or "Monkey"), a pig-spirit (Zhu-Baijie, or "Pigsy") and a river ogre (Sha-Wuqing, or "Sandy").

Tripitaka and his companions, as depicted at the Summer Palace, Beijing. Photo: Rolf Muller (licensed under GNU).

Together, they encounter a variety of natural and supernatural beings, and have to find ways of cooperating with one another in order to overcome them. It is a picaresque and comic masterpiece with a serious underlying spiritual message of redemption and enlightenment. It is also a portrait of China as it saw itself in Wu Cheng'en's time, with a complex intermix of Confucian, Taoist and Buddhist ideas superimposed on enduring ancient folk beliefs.

The original Chinese novel is very long (as is Bianji's factual account), and almost all English translations are abridged. Over the years, I have dipped into several rare library editions, but the most readily available is the Penguin edition of the translation by Arthur Waley. 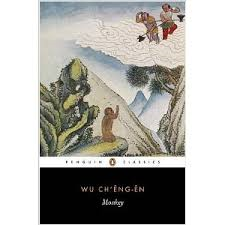 "'I am the Great Sage Equal of Heaven,'" said Monkey. "'Five hundred years ago I made trouble in the Halls of Heaven, and Buddha clamped me down in this place. Not long ago the Bodhisattva Kuan-Yin, whom Buddha had ordered to look around for someone to fetch scriptures from India, came here and promised me that if I would amend my ways and faithfully protect the pilgrim on his way, I was to be released, and afterwards would find salvation' ... "

"When the wind subsided there appeared a monster of truly terrible appearance. He had short bristles on his swarthy cheeks, a long snout and huge ears. He wore a cotton jacket that was green but not green, blue but not blue, and had a spotted handkerchief tied round his head ... Monkey caught hold of him and making a magic pass changed himself back into his true form... When Pigsy turned and saw Monkey with his sharp little teeth and grinning mouth, his fiery, steely eyes, his flat head and hairy cheeks, for all the world like a veritable thunder-demon, he was so startled that his hands fell limp beside him and his legs gave way. With a scream he tore himself free, leaving part of his coat in Monkey's hand, and was gone like a whirlwind ... If you do not know how far he chased him or which of them won the fight, you must listen to what is told in the next chapter."

Mark Patton's novels, Undreamed Shores, An Accidental King and Omphalos, are published by Crooked Cat Publications, and can be purchased from Amazon UK or Amazon USA.
Posted by Mark Patton at 01:43