A History of the World in 50 Novels. 14 - "Conscience of the King," by Alfred Duggan

By the middle of the 4th Century AD, most of England was thoroughly Romanised. Christianity was, by this stage, the official religion of the Roman Empire, but Christian and pagan imagery are often found alongside one another in the archaeological record, sometimes under the same roof. On the rich farmland of Southern England, some families had amassed considerable wealth, and this may have attracted the attention of pirates from northern Germany. 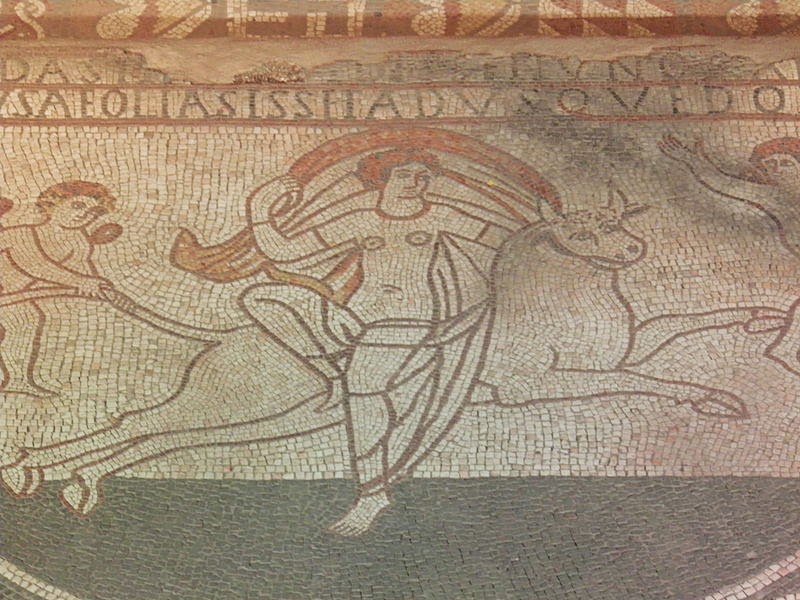 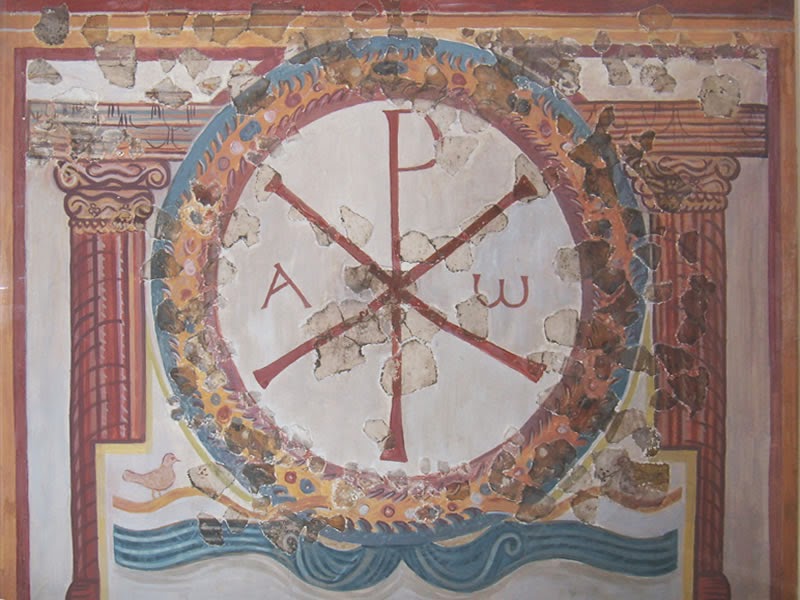 Christian "Chi-Rho" symbol painted on the wall of the same villa. Photo: Udimo (licensed under GNU). 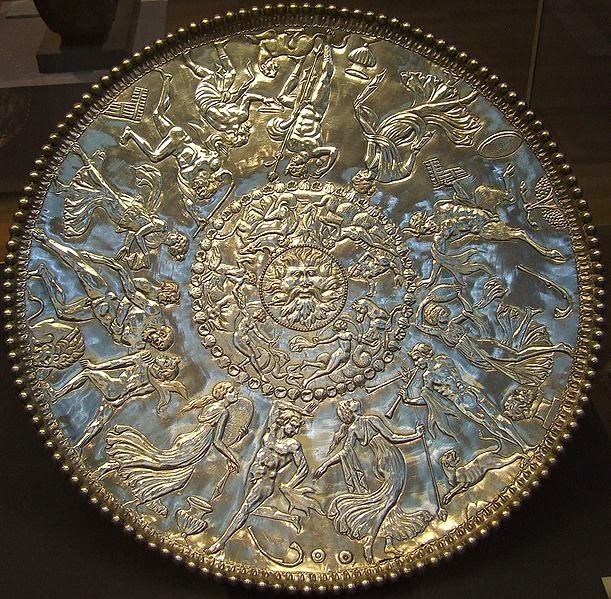 From around 290 AD, a series of forts were established along the coasts of southern Britain and northern Gaul, as a precaution against these pirate raids. Those cities which did not already have defensive walls rapidly threw them up.

Pevensey Castle (Anderida): the outer wall was built in the late 3rd or early 4th Century AD; the moated castle at top right is a Norman addition. Photo: Lieven Smits (licensed under GNU).

Britannia, however, had always been on the farthermost edge of the Roman Empire and, as the empire collapsed, it became an increasingly troublesome province. British forces played a key role in the attempted usurpations of Magnentius (353 AD) and Magnus Maximus (383-399 AD). By 400 AD, Roman Britain was, in effect, a failed state. Significant Saxon incursions occurred in 408 and 409 AD. Some towns found it easiest to pay individual Saxon war-bands to "protect" them, whilst others fell by force of arms. The Saxons who came, initially, as raiders, soon became settlers, bringing with them their own language, and their distinctive north European form of paganism. 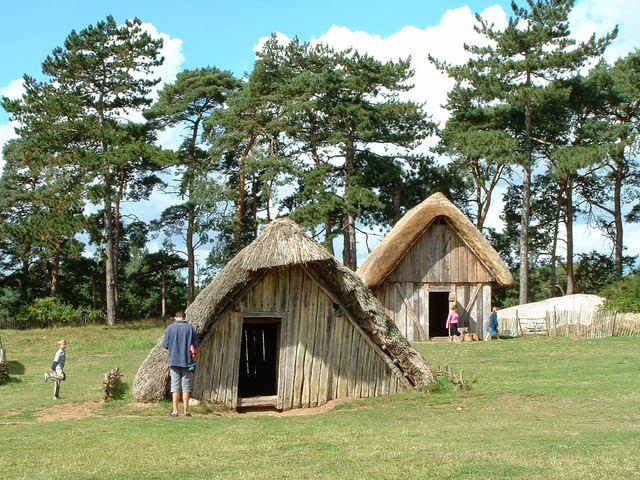 ﻿
Reconstructed Anglo-Saxon settlement at West Stow. Photo: Keith Evans (licensed under CCA).
Alfred Duggan's Conscience of the King is a fictionalised autobiography of Cerdic Elingas, a historical figure about whom little is actually known, but who is considered to be the founder of the Saxon royal house of Wessex (the Kingdom of the West Saxons). Duggan, however, introduces a twist, in that his fictionalised Cerdic starts life in Sussex as a Romanised Briton (though with German ancestors, and therefore "Woden-born"), and only begins offering his services to Saxon war-bands when he loses out in a dynastic struggle at home. 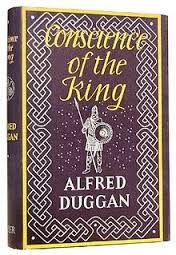 The novel is unusual in that its protagonist, Cerdic, is a difficult man to like. He is frequently cowardly, treacherous and brutal, the novel's title being deliberately ironic - one can question whether Cerdic actually has a conscience at all. He cooperates with others when it suits his purposes, but the only human being for whom he seems to have anything resembling love is his son, Cynric. His one redeeming quality, perhaps, is his honesty, at least in this written account: he at no point tries to hide or disguise his intentions from the reader. He is, at least, a reliable narrator. Through this narration, Duggan is able to paint a credible picture of what life in a failed state might actually have been like.

"Before this scandal I had not disliked my elder brother in the least; he was an obstacle to my advancement, and one day I should have to deal with him; meanwhile we got on well enough together, for he could be a witty and amusing companion. But now I began to hate him as a person ... This was very unfortunate, for hatred made me act hastily ... I slipped the little seax-knife in my left hand into his armpit; he staggered wildly, and I stabbed him again in the big vein of his neck."

"It may seem odd, but it is the fact that I felt no compunction about leading this attack on my native land. Constans had tried to take my fairly-earned plunder, and I had been compelled to stab him; I had finished with Rome, and with Christianity, and all the ways of civilised men; I was a Woden-born noble of the family of Aellinga, and a wolf to every peaceful sheep of Britain ... One peasant recognised me, and cried shame on me for a traitor before we cut him down; but my men understood not a word of Celtic, and thought he was only shouting defiance." 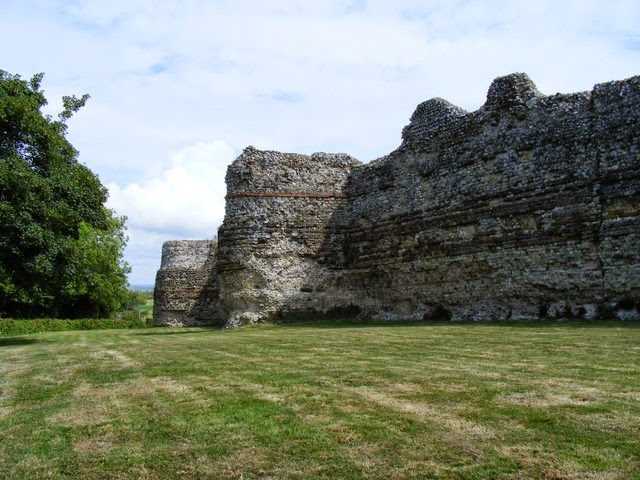 The walls of Anderida, on which Cerdic leads an assault. Photo: Paul Farmer (licensed under CCA).

"This episode worried me a little, for I did not want Aella to know that I was waging war on my father; no German would understand the excellent reason I had for such a drastic step. It would be wiser if in the future I kept in the background when men were being slain in cold blood, or it would seem curious that the victims always insulted me in particular."

Behind this rather unusual narration, there are at least a couple of serious points. The first is that, in a failed state, a land with no effective law, men of conscience are unlikely to succeed. The second is that most "legitimate successions" in history have their origins in regimes that came to power through the sword. As Duggan points out in his postscript, Cerdic did, in fact, found the royal house of Wessex and, "Through Matilda, the Queen of Henry the First, the present royal family of Great Britain are Woden-born Cerdingas."