The Colossus of Chichester

More than two centuries ago, the head of a massive statue came to light at Bosham, on the shores of Chichester Harbour. Its features were badly degraded: some suggested that it was a statue of the Norse God, Thor; others that it was a Roman Emperor, perhaps Nero or Vespasian. It was kept, for many years, in the garden of the Bishop's Palace in Chichester, and was later moved to the Chichester Museum, and then to Fishbourne Roman Palace. It can now be seen at The Novium, Chichester's new city-centre museum. 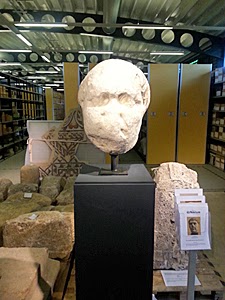 At around the same time as the "Bosham head" was being unearthed in Sussex, a more complete statue was discovered at Ostia, the port of Rome itself. Although broken (and subsequently lost), this statue was in better condition. Twice life-size, at 5.57 metres in height, this was unmistakably a statue of the Emperor Trajan (reigned 98-117 AD). Evidence suggests that it was erected as a tribute by Trajan's successor, Hadrian.

I first saw the "Bosham head" many years ago, and looked at it again when I was carrying out the research for my novel, An Accidental King. I was tempted to include the statue in the book, either as Nero (perhaps erected in the aftermath of the Boudican Revolt) or as Vespasian (erected by the client King, Cogidubnus, shortly after the death of his Imperial patron). I had nagging doubts, however, and eventually left it out, a decision that I now have good cause not to regret.

Dr Miles Russell of Bournemouth University has recently re-examined the head, using the most up-to-date laser technology to compare the features of the hair and face with other known Roman statues. His conclusion is a surprising one: the Bosham Statue was almost certainly of Trajan and, carved from Italian marble, was probably a copy of the one erected by Hadrian at Ostia. Both are likely to have been versions of a military statue of the emperor found throughout the Roman world. 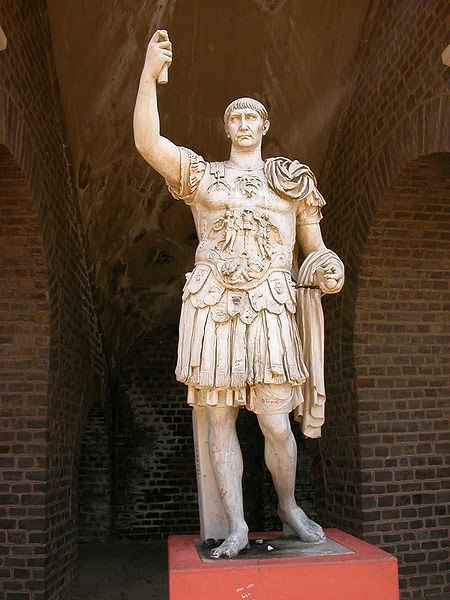 Such a statue, of course, can have nothing whatever to do with Cogidubnus, who was probably dead by the time of Trajan's accession, and must certainly have been so at the time of Hadrian's. These findings suggest a direct link between the 2nd Century harbours of Chichester and Ostia. 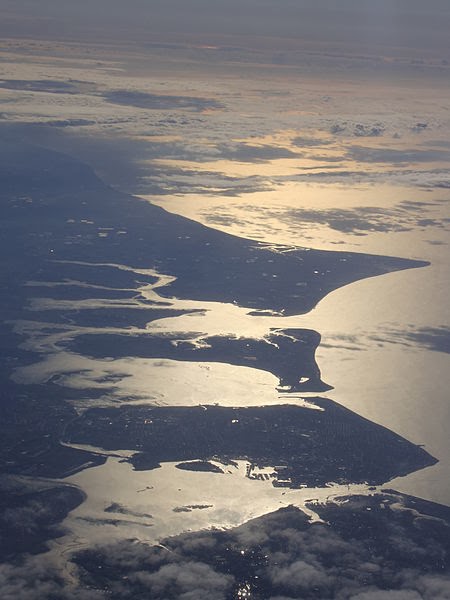 The harbour of Portus, Ostia, including the hexagonal basin created by Trajan, on the side of which his statue was located. Photo: Google Maps. 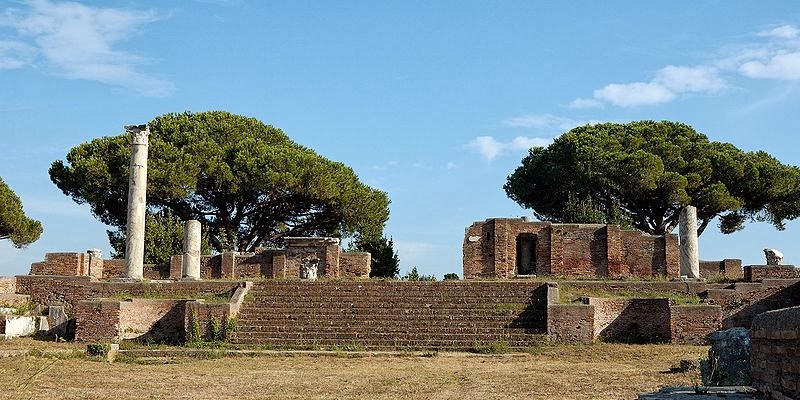 The "round temple" of Ostia, in front of which Trajan's statue stood. Photo: Marie-Lan Nguyen (licensed under CCA).

Russell has suggested that the Bosham Statue, which would have dominated Chichester Harbour as its twin dominated Ostia, was probably erected to commemorate Hadrian's visit to Britain in 121-2 AD. If so, we have to wonder whether Hadrian arrived at, or departed from, Chichester. We have no indications as to who owned the palace at Fishbourne at this point in time, but it seems overwhelmingly likely that the emperor was entertained there.

I have previously discussed the importance of Chichester as a Roman port of the 1st Century AD, in my blog-posts of 12th April and 5th August, 2013, but the new evidence suggests its continued importance as a harbour into the 2nd Century, long after the establishment of London as a key port and the capital of the Roman Province of Britannia.

Mark Patton's novels, Undreamed Shores, An Accidental King and Omphalos, are published by Crooked Cat Publications, and can be purchased from Amazon UK or Amazon USA.
Posted by Mark Patton at 01:29