Great Books of 2013: Sideways Glances at the English Landscape and Village Life

At this time of the year, I generally take a look back at those new books (mostly, but not exclusively, historical fiction) that have impressed me over the past twelve months. Inevitably, it is a somewhat eclectic list, driven by my personal tastes and limited to those books which I have so far got around to reading (those still sitting on my shelf "to be read" include Eleanor Catton's The Luminaries and Donna Tartt's The Goldfinch).

Two of this year's books stand out, in my mind, as explorations of aspects of the English countryside and traditional village life that can all too easily be sanitised and romanticised in fiction. The authors of these books, however, approach their subject matter with a subtle, original and nuanced sensitivity.

The first is Jim Crace's Booker short-listed Harvest (Picador), set in an unspecified time and place, but very clearly located within a familiar English rural milieu. 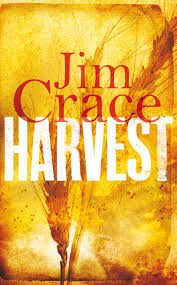 No identifiable towns or cities, monarchs or specific historical events are referred to. It matters little that the way of life and the language feel like they should belong in the 16th or 17th Century, whilst the central issue hanging over the heads of the characters (the enclosure of common land and the displacement of people in favour of more profitable sheep) seems to belong more to the 18th Century. 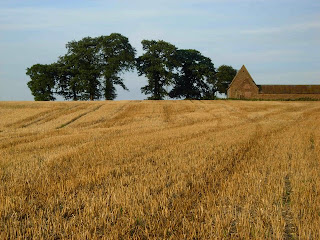 Fields near Watford Gap (photo: Stephen McKay, licensed under CCA). Jim Crace has described an epiphany moment, driving through this landscape and sensing it as being "absolutely drenched in narrative."

The real matter of the book is timeless. Communities are shown as inward-looking and suspicious of newcomers; characters allow innocent outsiders to be held up as scape-goats for crimes rather than see their guilty neighbours punished for them; they persecute refugees even down to the very moment when they themselves become refugees. The English village of the 16th Century had its pillory; the English city of the 21st Century sends bill-board vans to drive around the streets with racist slogans, telling immigrants to "go home." It is the similarities, rather than the differences, between past and present lives that are emphasised in a book that is fundamentally political - an "anti-pastoral" novel, as Oliver Neto describes it in The Oxonian Review (www.oxonianreview.org/wp/an-anti-pastoral-novel). 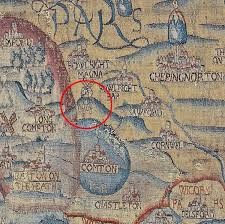 The Elizabethan Sheldon Tapestry Map of Warwickshire (image is in the public domain). Map-making plays an important symbolic role in Crace's novel.

The second book is Kristina Carlson's Mr Darwin's Gardener (Peirene Press), a book set in a very specific time and place (the Kent village of Downe in 1880), but with a similarly focussed gaze on the dynamics of a small, inward-looking community. 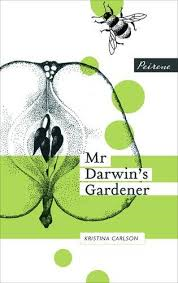 Charles Darwin, the village's most famous resident, is never a character on Carlson's page (and even the eponymous gardener is just one of many vividly sketched characters), but the changing view of the world that his theories represent, with the attendant loss of all the comfortable old certainties, hangs over the characters as surely as brutal economic realities hang over those of Crace's un-named village. 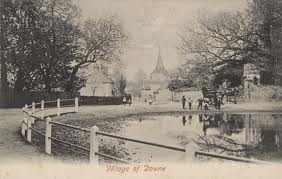 The village of Downe in 1886 (the image is in the Public Domain).

Heroes and villains are not a feature of either work. Flawed humanity predominates, with characters in whom we can all to readily (and often disconcertingly) catch glimpses of ourselves. The style of narration in the two books could hardly be more different. Crace narrates in the first person through the character of Walter Thirske (himself an outsider in the village), whilst Carlson flits like a songbird, from the branch of one view-point to the bough of another, in gloriously successful defiance of all the "rules" of creative writing.

The imaginative way in which language is used is, for me, a big part of the enjoyment of these two books, both of which I will read again and again. Crace has hinted that, if the story has a "location" at all, it lies within the Forest of Arden, and makes free use of the Shakespearean rhythms of iambic pentameter:

"Our humour ripens as the barley falls. It's safe to spread the gossip noisily, it's safe to bait and goad, Who's sharing wives? ... which blushing youngsters are the village spares?"

"The village is aflame, but not with fire ... The air was swarming with anxieties ..."

Carlson's prose poetry (translated into English from her native Finnish by the mother and daughter team of Emily and Fleur Jeremiah) is altogether more free and modernist, but no less evocative for that:

Nicholas Lezard has compared Carlson's writing style to that of James Joyce (www.theguardian.com/books/2013/jun/25/mr-darwins-gardener-carlson-review), but Mr Darwin's Gardener is a much easier read than Ulysses, let alone Finnegan's Wake.

I am much the richer for having read both books, but should either be thought of as a work of "historical fiction"? It very much depends on how one defines the term. Real historical people and events lurk in the background of Carlson's book, but there they remain, in the shadows (some of the names are those of real villagers, but they are ordinary people about whom history tells us little, and whose personalities Carlson is consequently free to invent). On Crace's page, real historical people are nowhere to be found, not even in the darkest shadows.

Contrasting his project with that of Hilary Mantel, Crace himself has eschewed the stricter definitions of what "historical fiction" is. "I don't want facts," he insists (www.theguardian.com/culture/2013/aug/16/jim-crace-interview). "I want to make things up, and to dig deep into traditional storytelling to produce a tale that illustrates the subject matter I care about."