Casting Light on Saturnalia: The Pagan Origins of the Modern Christmas 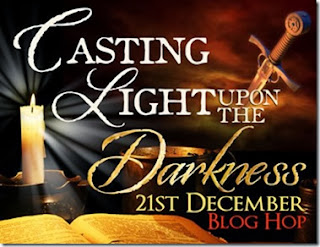 There is nothing in any of the four gospels to tell us that Jesus was born in December. Medieval theologians simply considered it likely, on the basis that God's plans must surely be perfect, and that a perfect plan would have the son of God conceived during the feast of the Passover, at the same moment in the calendar as his eventual sacrifice. The placing of Christmas at this time in the year, however, had another advantage, in that the new Christian festival could slip seamlessly into the place formerly occupied by the Pagan festival of Saturnalia. 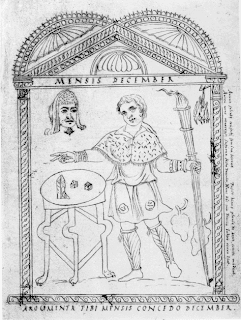 The Month of December, from a 17th Century copy of a chronography of 354 AD. It shows a comic mask hanging above a table with dice.

Saturnalia honoured the god Saturn, whose temple in Rome stood on the slopes of the Capitoline Hill, directly below that of the city's chief god, Jupiter "The Greatest and Best." 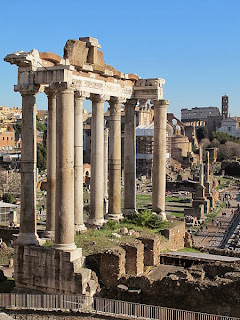 The Temple of Saturn in Rome. Photo: Sailko (licensed under GNU).

It was supposedly a festival of joviality, during which serious business was suspended, masters waited on their slaves, and men of all classes donned the conical felt "liberty cap" of the freed slave. Eating and drinking played a key role: it was the custom to sacrifice a suckling pig, of which the god consumed only the bones and fat. 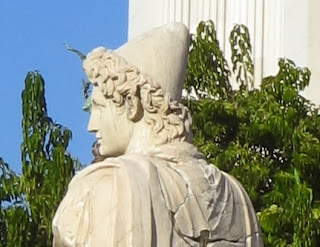 Statue of a Dioscure with a pileus, or "liberty cap." Photo: Carlomorino (image is in the Public Domain).

The Roman writer, Macrobius, whose life straddled the turn of the 4th and 5th Centuries AD, tells us that the festival was originally held on a single day, the fourteenth before the Kalends of January, and that this fell on the day before the winter solstice. Julius Caesar, however, added two days to the month of December, placing Saturnalia sixteen days before the Kalends, whilst the later addition of the Sigillaria extended the festivities to seven days. Macrobius shows us the conversations at the dinner parties that took place between twelve friends over the course of the seven days. He does not, however, show them waiting on their slaves, or even dining with them. Instead, having agreed with Seneca on the humanity of slaves, and on the importance of treating them humanely, they proceed to discuss the finer points of Virgil's Aeneid, whilst course after course arrives on their table, as if by magic! One wonders whether the "spirit" of the Roman Saturnalia, like that of the Victorian Christmas, was honoured as frequently in the breach as in the observance.

Sigillaria was the occasion for gift-giving, as described by the Roman poet, Martial:

"Now, while the knights and the lordly senators delight in the festive robe, and the cap of liberty is assumed by our Jupiter; and while the slave, as he rattles the dice-box, has no fear of the Aedile, seeing that the ponds are so nearly frozen, learn alternately what is allotted to the rich and to the poor. Let each make suitable presents to his friends. That these contributions of mine are follies and trifles, and even worse, who does not know? Or who denies what is so evident? But what can I do better, Saturn, on these days of pleasure, which your son himself has consecrated to you in compensation for the heaven from which he ejected you? Would you have me write of Thebes, or of Troy, or of the crimes of Mycenae? You reply, 'Play with nuts.' But I don't want to waste even nuts. reader, you may finish this book wherever you please, every subject is completed in a couple of lines." 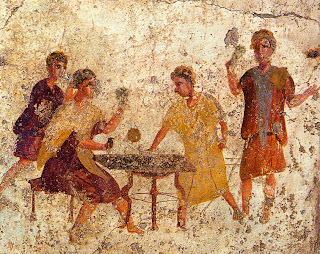 Image of dice-players, from the Osteria della Via di Mercurio, Pompeii. Photo: Wolfgang Rieger (image is in the Public Domain).

Gifts listed include a sausage, a parrot, a pastry phallus and even "a barbarian basket ... from the painted Britons" but, then as now, some gifts were unwanted. Catullus's thank-you letter to his friend, Calvus, is hardly effusive:

"If I did not love you more than my eyes, most delightful Calvus, for your gift I should hate you ... for what have I done, or what have I said, that you should torment me so vilely with these poets? Great gods, what a horrible and accursed book ... you have sent to your Catullus, that he might die of boredom the livelong day of the Saturnalia, choicest of days."

Mark Patton's novels, Undreamed Shores and An Accidental King, and Omphalos are published by Crooked Cat Publications, and can be purchased from Amazon.

You might like to look at these posts by my fellow authors participating in this seasonal blog-hop: