Castles, Customs and Kings, True Tales by English Historical Fiction Writers, edited by Debra Brown and M.M. Bennetts and published by Madison Street Publishing, is a miscellany of non-fiction articles written by historical novelists, not all of whom are English (the selection also includes articles by Scottish, Welsh, Irish, American, Canadian and Australian authors), and covering all aspects of British, rather than solely English, history. 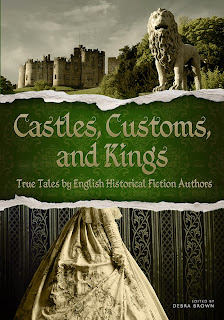 All of the articles appeared originally on the English Historical Fiction Authors' Blog (http://englishhistoryauthors.blogspot.com), a website to which I now contribute. This volume, however, does not include any of my articles, because its contents are drawn from the first year of the blog's existence (September 2011-2012) before I joined the team.

The editors' aims are set out in the introduction. "The authors of this book are, for the most part, historical fiction writers. To create good historical fiction, we have studied the times of which we write, and the events that came before. We would like to share some of the fascinating things we have learned..."

It's an urge that I well understand. In the course of my own research over the past year for my next novel, and for a series of short stories, documents that have crossed my various desks at the British Library, the National Archives and the London Metropolitan Archives have included the 12th Century manuscript of the Liber Sancti Jacobi, giving details of the pilgrimage to Santiago de Compostella (I went back to the original manuscript because historians agree that the only complete translation is deeply flawed); Medieval penitentiaries (used by priests to set penances for sins); service records from the Metropolitan Police in the late 19th and early 20th Century); and Royal Navy muster lists and log books from the 18th Century. Only a tiny portion of what I gleaned from these documents will ever find its way directly into my fiction. We are distillers, not regurgitators, of history.

I asked editor, Debra Brown, what makes for a good blog post, given that it is a relatively new literary form which, like the tweet, did not exist when she and I were first reading. "....the posts, for the most part, are a report of historical events.." she replied. "On many blogs, historical topics are debated, as we have seen with the differences of opinion on the character of Richard III...authors using different resources...may offer different points of view."

To my mind, blog-posts tend to be read rather more casually than more conventional forms of non-fiction. They need to be short and to the point (capable of being read and absorbed in the time it takes, or perhaps half the time it takes, to drink a cup of tea or coffee) and, as Debra hints, it is no bad thing if they encapsulate a note of historical controversy and (in the context of historical fiction writers), if we give clues as to why we wrote our characters and scenes in the way that we did, in the full knowledge that this represents only one possible interpretation. Blogs are an opportunity for us to "show our workings," to reveal the complexities that few fiction readers want to see in a footnote or an endnote.

The contributions to the book cover the full scope of the British past, from prehistory to the 20th Century. Among my favourite articles are Richard Denning's, on the first written word in English (runes on the bone of a deer from Caistor St Edmund in Norfolk, perhaps scratched by a Saxon mercenary in c420 AD); Roseanne Lortz's on The Venerable Bede and the origins of the modern western calendar; and Carol McGrath's discussion of the Christmas of 1065 and the iconography of the Bayeux Tapestry. 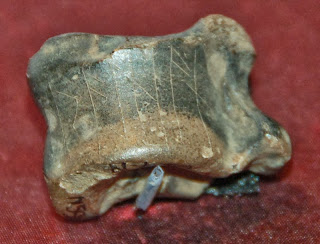 Inscribed deer-bone from Caistor St Edmund. The runic inscription reads "from a roe."

The death of Edward the Confessor, as depicted on the Bayeux Tapestry: one of the turning points of English History.

There are even recipes (Katherine Ashe tells us how to re-stage a feast from 760 years ago, including galantine sauce for fowl, meat and fish, pease pottage and mawmange of lamb and lentils - I am thinking of this for Christmas 2013, if a certain person can be persuaded to join me...). It is a book to dip in and out of, rather than read from cover to cover. It makes no claim or attempt to be a substitute for academic works of history, but it offers some fascinating insights.

Castles, Customs & Kings, True Tales by English Historical Fiction Writers, is published by Madison Street Publishing, and can be purchased from www.amazon.co.uk and www.amazon.com.