Frederick Marryat: A Writer's Writer in the Age of Sail 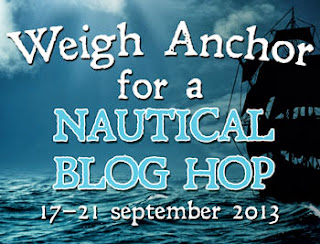 The novels of Frederick Marryat (1792-1848) do not have a particularly wide readership today. Some of us have distant childhood memories of enjoying his Children of the New Forest, a saga of the English Civil War (and one of his few novels to remain in print as a paperback) but, in his lifetime, he was better known for his adult fiction and, most especially, for his sea stories, which had a profound influence on Joseph Conrad, C.S. Forester, William Golding and Patrick O'Brian. His main readership today is perhaps among those writing fiction about the age of sail. 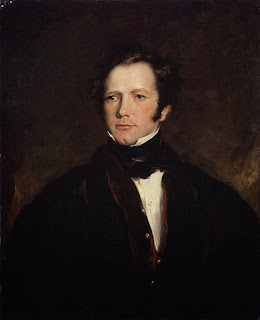 Frederick Marryat was the son of the MP and "merchant prince," Joseph Marryat, and his German wife, Charlotte. He joined the Royal Navy as a midshipman in 1806, and retired as a captain in 1830, making a very respectable living as a writer. He was an acquaintance of Charles Dickens, but did not share his talent for finding the most appropriate names for his characters. Action heroes with names like Peter Simple, Frank Mildmay or Mr Midshipman Easy were never likely to endure alongside Mr Midshipman Hornblower, Jack Aubrey or John McWhirr, even if they were on the scene first. Marryat's novels, however, are so closely based on his own naval experience that it is often difficult to know where the memoir ends and the fiction begins. That makes them a tremendous resource for anyone writing about nautical life in the 18th or 19th Century. They give us real glimpses into the realities, both social and technical, of life under sail. 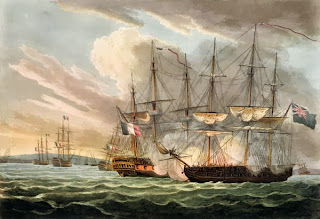 Thomas Whitcombe's "Destruction of the French Fleet in Basque Roads." The ship in the foreground is HMS Imperieuse, the first on which Marryat served.

In Frank Mildmay, or the Naval Officer (1829), he shows us an encounter between a young officer and a condemned man. The older man, facing death without any consolation of religious belief, gives the officer some advice.

"When you are a captain, as I am very sure you will be, do not worry your men into mutiny by making what is called a smart ship. Cleanliness and good order are what seamen like, but niggling, polishing, scraping iron bars and ringbolts and the like of that, a sailor dislikes more than a flogging at the gangway. If, in reefing the topsails, you happen to be a minute later than another ship, never mind it, so long as your sails are well-reefed and fit to stand blowing weather."

In Peter Simple (1834), he shows us the club-hauling of a vessel, a complex and desperate manoeuvre rapidly to turn a ship when it is in danger of being driven aground on a lee-shore.

" ... the whole sky was covered with one black cloud, which sank so low as nearly to touch our mast-heads, and a tremendous sea ... rolled in upon us, setting the vessel on a dead lee-shore ... 'Pipe Belay,' said the captain ... our lives may depend on it! ... Hands by the best bower anchor, Mr Wilson, attend below with the carpenter and his mates, ready to cut away the cable at the moment I give the order ... The captain waved his hand in silence to the quarter-master at the wheel, and the helm was put down. The ship turned slowly to the wind, pitching and chapping as the sails were spilling ... The captain gave the order, 'Let go the anchor' ... At last the ship was head to wind, and the captain gave the signal. The yards flew around with such a creaking noise that I thought the masts had gone over the side, and the next moment the wind had caught the sails and the ship ... careened over to her gunnel with its force ... A few strokes of the axes were heard, and then the cable flew out of the hawse-hole in a blaze of fire ..."

It is, quite simply, the best description that exists of a manoeuvre that has probably not been performed by anyone alive today, and there are plenty of similar examples in Marryat's books that I could have chosen. 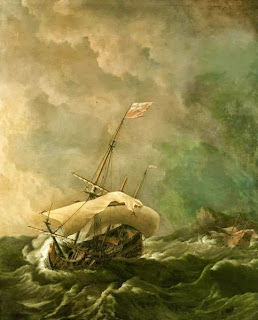 Willem Van de Velde's "English ship in a gale trying to claw off a lee shore" (1672). Her captain is attempting precisely the manoeuvre Marryat describes.

Since most of Marryat's books are out of print, I had to consult the British Library's copies but, within the past few months, many of them have been digitised, and are freely available for e-readers, opening these windows on naval life to a new generation of readers and writers.