The Catuarus Ring: Royal Names in the 1st Century AD

In 2009, when I first began the research for An Accidental King, I visited Fishbourne Roman Palace for the first time in more than twenty years. It was a logical starting point, given that I was writing a book on Tiberius Claudius Cogidubnus and believed (though this cannot be stated with certainty) that the palace had been his home. Much of it was as I remembered it from my childhood, but one object in the museum stood out, which had not been there when I last visited. It is a simple gold signet ring with the name "Tiberius Claudius Catuarus," and it had been found in 1995, 200 metres to the east of the palace. 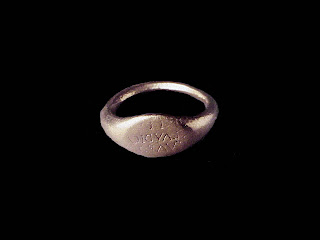 We don't know who this "Catuarus" was. He is not named in any of the historical sources, or on any known inscription. The tantalising possibility for me was that he might well have been Cogidubnus's son. If this is the case, then his father was not following conventional Roman naming customs, but then there is nothing "conventional" about Cogidubnus's own name either.

Noble Roman names have three elements, a praenomen, nomen and cognomen, as in "Gaius Julius Caesar." The first of these is a "given" name (although in practice a boy often inherited even this part from his father - the Gaius Julius Caesar who conquered Gaul was the fourth man in his family to bear this name), the second two are family names. If Cogidubnus was a prince of the royal line of the Regnenses, his father might have been Verica, Tincomarus or Eppillus. An alternative suggestion is that he was the same man as the "Togodumnus" mentioned as the son of the Catuvellaunian king, Cunobelinus.

Cogidubnus's name, however, does not help us in identifying his father. "Cogidubnus" is a British given name, whilst "Tiberius" and "Claudius" are taken from the name of the emperor who conquered Britain (Tiberius Claudius Caesar Augustus Germanicus, known to us as the Emperor Claudius). It can hardly be believed that Cogidubnus was a blood relative of Claudius and, in any case, the taking of a patron's praenomen and nomen is a  common convention for freed slaves (the same emperor had a favoured slave named Narcissus who, on being freed, became "Tiberius Claudius Narcissus"). Cogidubnus may have adopted his name without fully understanding its significance. It would not have been lost on anyone in Rome. In naming his own son, Cogidubnus might well have given him a name in the usual British way ("Catuarus" is a British, not a Roman name), adding his own praenomen and nomen.

One question that has often vexed writers of historical fiction set in Roman times is that of how people would have addressed one another. How widely used was the praenomen? Was it used only within the family (as Christian names generally were in Victorian times, at least in "polite" society), or among a wider circle of friends, as we use first names today? A clue comes in a recently translated document, The Colloquia of the Hermeneumata Pseudodositheana (trans. E. Dickey, Cambridge University Press, 2012). Essentially a phrasebook for teaching Greek to Latin speakers and Latin to Greek speakers, it includes a dialogue between two friends who meet in the street and discuss a law-suit:

"...the master of the house, going forth, met his friend, and said 'Hello Gaius!' and he kissed him, and Gaius returned the greeting, saying 'May you be well, Lucius, do I really see you?"

It seems that, to his friends, Cogidubnus would probably have been "Tiberius."

A replica of the Catuarus ring is on display at Fishbourne Roman Palace, where I shall be giving a reading on the afternoon of Saturday 10th August (4.00 PM).

Mark Patton's novels, Undreamed Shores and An Accidental King, are published by Crooked Cat Publications, and can be purchased from www.amazon.co.uk and www.amazon.com.
Posted by Mark Patton at 01:20