In 1996, archaeologists excavating in a gravel quarry at Stanway, near Colchester, discovered a series of burials with rich grave-goods, dating between 40 and 60 AD. They were named after the objects found with them: "The Warrior;" "The Inkwell Burial;" "The Brooches Burial;" "The Mirror Burial;" The Doctor's Grave."

The burial rite (interment of cremated remains with grave-goods in wooden burial chambers placed within ditched enclosures) is British rather than Roman, but most of these people were buried at a time when Camulodunum (Colchester) was already the capital of the Roman province of Britannia, and the objects buried with them include Roman pottery, glass and wine amphorae. Prior to the Roman invasion of 43 AD, Camulodunum had been the capital of the Catuvellauni tribe, and these graves are rich enough to suggest that their occupants may have been close associates, or even relatives, of the local king, Cunobelinus.

The "Doctor's Grave" is so-called because of the surgical instruments found with the remains, but the burial also included a board-game; a set of bronze and iron rods which may have been used for divination; a jet bead; a wine amphora; and a cup with traces of the herb, mugwort, possibly a herbal remedy. In his report of the excavation, the archaeologist, Philip Crummy, suggested that the individual may have been a druid: 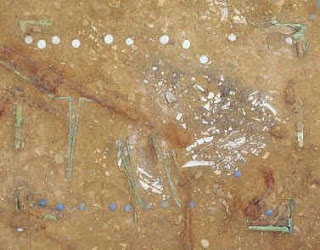 "The so-called druid may have been a doctor. The tea-strainer contains Artemisia pollen, which is commonly associated with herbal remedies. Healing is an attribute given to druids. We don't know what the metal rods are for, but we think they could have been used for divining. The question is whether all that stacks up to him being a druid. It could be - it was certainly somebody special."

In my novel, An Accidental King, the character of the druid, Adiantos, is directly based on this discovery:

"Adiantos touched my arm... 'Come, I need to talk to you.' Together we slipped out of the song-house. We sat down together on the grass, Adiantos fingering the jet bead he wore on a thong around his neck. By this time the stars were emerging in a darkening indigo sky. He took a copper rod from the bag and handed it to me... 'The question is, does this omen...presage bloodshed in our land?' I threw the rod into the air, and watched as it landed in front of us...It was pointing south-east. He pointed up at the sky. There, shimmering red, directly in the line of the copper rod, was Mars. Not much doubt about that." 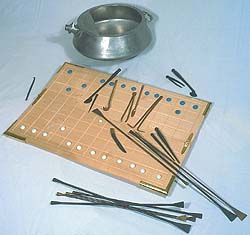 Objects from the "Doctor's Grave," including the gaming board and possible divination rods. Photo: Colchester Museum,

In the novel, Adiantos is married to Cunobelinus's sister, Resilla, who surrenders Camulodunum to the Romans following the defeat of her nephews, Caratacos and Togodumnus, at the crossing points of the Medway and Thames. Adiantos goes on to cooperate  with the Roman surgeons in treating the wounded on both sides, and desperately wishes to prevent further bloodshed.

We will never know the real name of the Colchester "doctor" (the remains are so fragmentary that even the gender of the individual cannot be determined) but s/he clearly belonged to a Catuvellaunian aristocracy who were already significantly "Romanised" before the invasion of 43 AD, and who probably went on to benefit from new status of Camulodunum as the capital of the Roman province.

Mark Patton's novel, An Accidental King, is published by Crooked Cat Publications, and can be purchased from www.amazon.co.uk and www.amazon.com.