Fictionalising the Empire: The Historical Novel and the Roman World.

There is no shortage of fiction set in the Roman world, indeed one agent was heard to express the view, at a recent conference, that there was already far too much of it. There are many more Tudor novels than Roman ones, but I'm glad Hilary Mantel didn't heed any similar advice.

Most novels dealing with the Roman Empire follow one of two avenues. Many are set firmly within the world of the Roman army, and require their authors (Simon Scarrow, Conn Iggulden, Harry Sidebottom) to be intimate with the workings of a carroballista, the fittings of a centurion's armour and the precise structure of a legionary cohort or a cavalry ala at a given moment in time. Participation in a re-enactment group would presumably help, but so, too, does Sidebottom's academic background as an expert in Roman military history. Others are set equally firmly amidst the political intrigues of Rome itself, in which case their authors (Robert Harris being the obvious example) might better be acquainted with a ruthless environment in government or business. Some manage to combine the two, as Robert Fabbri does in his Vespasian series. There is room for all of this, I think, and more.

Probably the most successful formula is to find a new angle. We all know that elephants were used in the Roman invasion of Britain, but what were the practicalities of manoeuvring a Roman elephant through a British warzone? Neither history nor archaeology can tell us much about that, but Douglas Jackson's Claudius can help us to imagine it. Robert Harris's choice of a hydraulic engineer as the protagonist of Pompeii is similarly inspired, as is Lyndsey Davis's paid informant, Falco, in The Silver Pigs (a book initially intended as a spoof, transposing the form of the American detective novel back into antiquity, but which has developed into far more than this in the series that followed).

So what remains to be written? One could tell a familiar story from an unfamiliar viewpoint (the starting point for Mantel's Tudor novels). Robert Graves chose the Emperor Claudius himself as his protagonist, but what about the perspective of his freed slave, Narcissus, who rose to be his closest adviser? Or one could build a story around a wholly fictional character. How about a brothel-keeper in Ostia? She would surely know all the gossip. Sites and museums are invaluable in imagining the world of a fictional character. 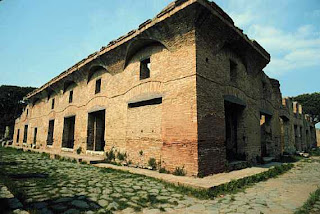 The "House of Diana" in Ostia, thought by some to have served as a brothel. 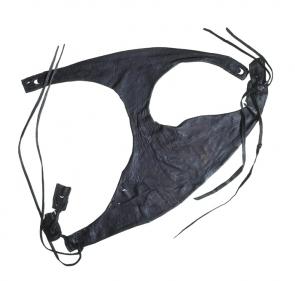 Leather "bikini" in the Museum of London collection.

Invaluable, certainly, but no substitute for detailed research. The basic research (i.e. before writing the first sentence of the first draft) for my forthcoming novel, An Accidental King, involved a year of full-time work, much of it within the British Library, but also including visits to sites and museums in Chichester, Colchester, Thetford and Rome itself. The research continued as I wrote, and even as I edited, ensuring (hopefully) that I kept up to date with recent discoveries.

I already knew a fair amount about the Roman world, but I found an invaluable starting point to be Jerome Carcopino's (1940) Daily Life in Ancient Rome. It gives details of, for example, the monetary system, the calculation of the hours of the day, and the way in which the Romans structured their daily activities. The reader of the novel doesn't need to know these details, but the writer does. The characters won't talk about them, because they are taken for granted. From the writer's point of view, they make up the unseen base of Hemingway's iceberg ("If a writer knows enough of what he is writing about, he may omit things that he knows...The dignity of movement of an iceberg is due to only one-eighth of it being above water").

What themes in Roman life would you like to read or write about?

Mark Patton's novel, An Accidental King, set in the 1st Century AD, will be published by Crooked Cat Publications later this year.