Britain in the 1st Century AD: Who were the Regnenses?

There are maps of pre-Roman Britain which show most of Hampshire, together with the western part of Sussex, in the hands of a tribe called the Regnenses or Regni. There are other maps which show the same territories in the hands of a people called the Atrebates. All of these maps are modern attempts to make sense of a proto-historic reality that we can only ever glimpse through a glass, darkly, but where does the confusion come from?

The key centres of this part of the country seem to have been Chichester (which the Romans later called "Noviomagus Regnorum" - the new town of the Regnenses) and Silchester ("Calleva Atrebatum" - the town of the Atrebates, lying in the woods), so one possibility is that the Regnenses and the Atrebates were separate peoples, with the latter territory lying to the north of the former. The reality, however, seems to have been a little more complicated. 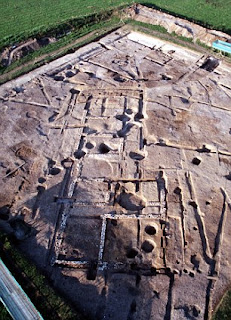 The excavations at Silchester. 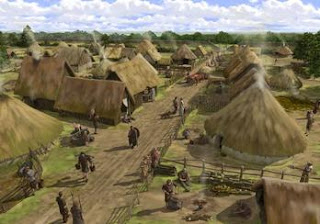 The earliest coins found in the area suggest that Silchester and Chichester were part of a single territory ruled by one man. The earliest whose name we know is Commius, who may have had a son of the same name. The younger Commius seems to have had three sons, Tincomarus, Epillos and Verica, each of whom ruled in turn. Between 30 AD and 40 AD the territory came under pressure from the Catuvellauni to the north. They siezed Silchester, and Verica fled to Rome, providing the Emperor Claudius with a pretext for the invasion of 43 AD.

Coin of Tincomarus, son of Commius. Overthrown by his brother, Epillos, Tincomarus took refuge in Rome, where he is named as living under the protection of the Emperor Augustus. 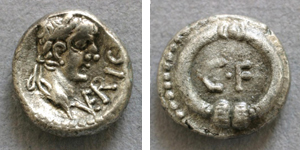 Coin of Verica. The image on the reverse is of a gold torc, and the letters CF identify him as the son of Commius.

But was Verica a Regnensian or an Atrebatic prince? The clue may lie in the career of his presumed grandfather, Commius. Julius Caesar, in his commentary of the Gallic War, names him as the king of the Atrebates, a tribe in northern Gaul. Commius was, at first, an ally of Caesar (sent by him to negotiate a truce with the British tribes) but later joined Vercingetorix's ill-fated rebellion against him. His Gaulish territories forfeited, he moved to Britain and, by 30 BC, was issuing coins from Silchester.

Commius and his dynasty, therefore, were Atrebates, but they were ruling on Regnensian territory. Perhaps, in the aftermath of Julius Caesar's brief, and presumably bloody, expeditions to Britain in 55 and 54 BC, it became a truth universally acknowledged that an Atrebatic prince who sailed into Chichester Harbour with a ship laden with gold must be in want of an aristocratic Regnensian bride. The two peoples may, effectively, have become one, with only two or three ship-loads of actual foreign immigrants.

Commius might not have proven himself an entirely reliable Roman ally but, having established himself in Britain, Caesar and his successors may have seen him as a useful counterweight to the power of the Catuvellauni, whose king, Cassivellaunus, had led the military resistance against Caesar. The focus of trade between Britain and the Roman world shifted from Hengistbury Head (Dorset), in the territory of the Durotriges, to Regnensian/Atrebatic Chichester, and to Colchester (itself contested between the Trinovantes, left in charge by Caesar, and the Catuvellauni, who had long been menacing them).

Rome was playing one tribe off against another, calling the first moves in a geo-political game that was only ever going to have one conclusion.

Update on 25/7/2019: the skeleton of a warrior, with a helmet and sword, was found at North Berstead, near Bognor Regis, in 2008, and will soon be displayed at Chichester's Novium Museum. It dates to around 50 BC (the period of Julius Caesar's conquest of Gaul, and the lifetime of the elder Commius). The buried man is likely to have been a senior retainer of either a Regnensian or an Atrebatic prince. The bronze helmet has an elaborate lattice-work crest, quite unlike anything found previously in Britain. I can't post the photographs here without infringing copyright, but they are included in a BBC report which can be seen here.


I have posted some related images at www.pinterest.com/markpatton.
Posted by Mark Patton at 02:40