However far back in time a historical novel may be set, the characters that feature in it must have an awareness and an understanding of times that came before them. Their narratives about those times will, almost invariably, be different from ours. They will frequently be based on oral tradition rather than written sources, raising the fascinating question of how long an oral tradition might survive.


One of the turning points in my novel, Undreamed Shores, comes when an old man recites a poem that tells of a voyage made by ancestors more than a thousand years before his own time. The book’s ending (which I do not intend to give away here) is loosely based on a legend, first written down in the 16th Century, and bearing all the stylistic hallmarks of a Medieval romance (a gallant knight, a dragon, a treacherous betrayal; a noble and constant lady). By adapting this legend in a story set in 2400 BC, I explore the possibility that the story itself might be based on a tradition that goes back millennia, rather than merely centuries. J.P. Reedman, in her recently published novel, Stone Lord, goes even further, in taking the familiar legends of the Arthurian cycle back to the age of Stonehenge. Neither Reedman nor I has evidence, of the sort that would convince a historian, to support such a contention but that, in a sense, is the point about writing historical fiction:  it enables us to explore aspects of the past that historians and archaeologists have no means of reaching.


So how far back might oral traditions go? Some of the descriptions of weapons and armour in Homer’s Iliad seem to predate the poem itself by four or five centuries. Among the folk songs collected by Cecil Sharp are some that appear to go back as far as the Hundred Years War. The French archaeologist, José Garanger, working on the Pacific island of Vanuatu, found material evidence in support of a legend concerning a powerful chief, Roy Mata, who had lived seven hundred years earlier. Is this a truly exceptional case, or just one of many stories that endured? 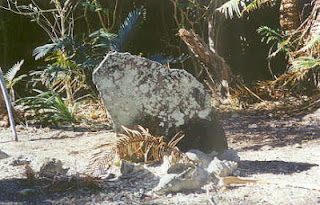 The grave-marker of Roy Mata on Vanuatu, evidence that the precise details of a historical event can survive in oral tradition for many centuries.


Our own “collective memory,” as Europeans, goes back around 2500 years: Julius Caesar, Alexander the Great and Socrates all have a place within it. Going back beyond this, we may still have names (Achilles, Odysseus, Jason), but it becomes increasingly difficult to separate out the fact from the fiction. Perhaps, indeed, it is the fictional element, the fantastical, that has allowed these stories to survive at all? All of these stories, of course, have survived with the aid of written records. If we imagine, however, that oral traditions might have allowed a British contemporary of Julius Caesar to see back into the past as far as we can: that person might be connected by these traditions to the builders of Stonehenge; and they, in turn, to the first farmers in this part of the world.


Undreamed Shores, the paperback edition, is available at £8.09 from www.amazon.co.uk/Undreamed-Shores-Mark-Patton/dp/1908910410/ref=sr_1-1. Further information, including two short stories linked to the novel, is available from my website: www.mark-patton.co.uk.
Posted by Mark Patton at 02:16