A set of stamps recently issued by the Post Office in Jersey celebrates the island’s megalithic heritage and, in doing so, provides a glimpse of some of the places that lie at the heart of my novel, Undreamed Shores.


Mont Ubé, which one has to imagine with its original capstones and covering mound, is the 6000 year old site, already ancient when the story opens, that features in Chapter 3 as ‘the Shrine of the Gannet Clan:’ “In his dream, he found himself in a confined space, crouching on the ground. Water dripped onto his shoulder from the crack between the heavy capstones…The quartz and mica crystals of the stones twinkled in the flickering light of his uncle’s lamp. He felt he was falling backwards, being pulled back into the belly of the earth. The signs of the ancestors flashed before his eyes: bindweed tendrils, spirals, whirlpools in the air. Gero…reached into the depths of one of the stone boxes that lined the wall of the shrine and produced a skull, handing it to Amzai…”.

The construction of Ville-ès-Nouaux takes place during the story, and is described in Chapter 19: “She pointed to the spot where the magpie had fallen.’Please bury his body separately over there, and cover it with the largest rock you can find, so his spirit cannot walk the Earth. Cover the rock with clay and place a circle of stones around the mound. I will cast a spell on that circle that will contain his poison forever…’”.


The Faldouet dolmen, already shown on one of the island’s coins, features in my short story, “The Thread that Binds (www.etherbooks.com).” 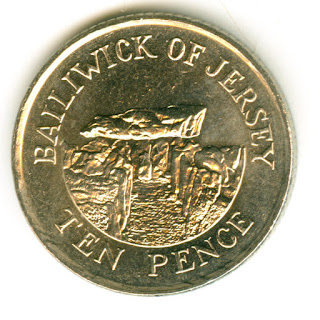