Today I am interviewing American writer, Rex Carothers, to mark the publication of his debut novel, The Hanging Murders. Rex, please tell us something about your novel, and how you came to write it.

Between 1932 and 1942, five unknown transient males were murdered by hanging in the high desert of Inyo County, California. None of the murders were solved; the victims were not identified; there were no leads or suspects. The unsolved murders became cold cases. Fifteen years after the last Hanging Murder, a new killing, exactly like all the others, lands on the desk of Jim Cobb, Sheriff of Inyo County. Jim had been elected Sheriff twelve months previously, taking over the job from his father, Merrill, who had served as Sheriff since 1920. The most recent victim was found in an abandoned barn, near the community of Bishop, fifty miles north of the main Sheriff's office in Independence.

Jim has taken bereavement leave from his job as Sheriff. On the previous 4th July, Jim's wife, Harriet, and their daughter, Kendall, were killed in a head-on car-crash as they drove down to Los Angeles. Since the funerals, he has found solace in a "4 Roses" Bourbon bottle. He is reluctant to return to work and take on the necessary job of apprehending the murderer, which his father failed to accomplish fifteen years earlier. A week after the return of the Hanging Murderer, a second murder is discovered, in an area west of Lone Pine, in the Alabama Hills area, where motion pictures have been made since the 1920s. The body, in an abandoned car, has been found by two British motion picture location scouts.

The latest victim is Barton Haskell, a retired Sheriff's Deputy, the best friend and former mentor of Jim Cobb, and the owner of the Cowboy Bar in Lone Pine. The news of Barton's murder kicks Jim in the head like a disgruntled ornery mule, and he swears not to have another drink until he has captured Barton's murderer, and solved the Hanging Murders.

Inyo County is one of the most remote districts of California. The landscape is known to some of us from Westerns, such as Ride the High County, and Nevada Smith, and the social environment of small-town America will be familiar to anyone who has read Raymond Carver, but what inspired you to choose it as the location for your novel?

Mark, I'm a "Baby Boomer," who was weaned on Westerns on TV, and at the movies. I love reading murder mysteries, police procedurals, and forensics. Inyo County is the home of filming outdoor location scenes for films and TV since 1920. Putting all my loved together was a no-brainer. I've driven between Reno and Los Angeles, on State Route 395, many times, visiting Lone Pine, the Alabama Hills area, and the town of Bishop for Mule Days. The area also includes Mount Whitney, the tallest peak in the continental United States, but also the lowest feature, Death Valley. The high desert is filled with panoramic vistas, desolate terrain, limited water resources, and few people.

Historically, Inyo County is the home to two different, but equally important, locations. The Owens Valley, from which Los Angeles stole water through an aqueduct designed by Mulholland, and paid for by the Los Angeles Times; and the scourge of the area, Manzanar, the Internment Camp of Japanese Americans during World War II.

The murders themselves span a period of three decades, from the 1930s to the 1950s. Were they inspired by real cases, or are they wholly fictional?

The Hanging Murders doesn't arise from real facts, but from my own skewed imagination.

The novel is billed as "A Jim Cobb Murder Mystery," Jim being the Sheriff, who has succeeded his own father in the role. Do you have other cases in mind for him?

My next Jim Cobb Mystery will centre on the killings of Japanese Nationals after Pearl Harbour, witnessed by a young cowboy on his last camping trip in the mountains above Death Valley, a week before he entered the Army in 1942. Twenty years after witnessing the murders, the horror of what a teenager saw before going off to war now intermingle with the memories of what the returned veteran sees each night in his nightmares, twenty years after the fact.

"The two women in my life were taken away in a horrific car-crash ... Unknown to me at the time, my wife was en-route to a rendezvous with her lover, to start a new life. The interloper was a history professor at UCLA by the name of Patrick Jensen PhD ... Three weeks after her death, I found her diary with her luggage returned after the crash. It detailed her insatiable sexual demands, her childish fantasy about happiness, what kind of man she wanted, a fairytale from Victorian times."

"The couple rode in Edith's 1953 Chevrolet Bel Air convertible, in a baby-blue colour, three-speed automatic transmission, power steering, and a new one-piece windshield. They drove west from the centre of town on one Pine Creek Road, looking a the snow-capped peaks of the High Sierra Nevada, with the highest peak in the 48 States, Mount Whitney. The Alabama Hills covered the next twelve miles north. The uncommon-shaped boulders and stone pinnacles portrayed old west desert settings to a far flung vision of the Far East."

The Hanging Murders, by Rex Carothers, is published by Crooked Cat Publications, and can be purchased from Amazon. 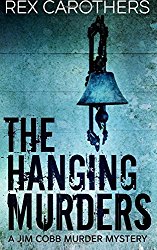