A History of the World in 50 Novels: 47 - "Earthly Powers," by Anthony Burgess

For more than a thousand years, through the Middle Ages and the Early Modern era, the lives of most people in Europe west of the Aegean resonated to the rhythms, chants, melodies, and prayers of the Roman Catholic Church. In cathedrals, abbeys, and parish churches, from the Arctic Circle to Malta, and from Poland to Portugal, bells, incense, and the words of the Latin Mass, coalesced to provide a fixed point in lives all too often disrupted by the uncertainties of plague, famine, and war. Although convulsed by the Protestant Reformation of the Sixteenth and Seventeenth Centuries; by the anti-clericalism of the French Revolution, and parallel movements elsewhere in the world; and by the advance of scientific rationalism and secularism in the Nineteenth and Twentieth Centuries; the Roman Catholic Church remains, to this day, one of the largest organisations in the World, with an estimated 1.27 billion members.

In order to maintain its position, however, the Church has had to adapt. Until the unification of Italy in 1870, the Pope was a secular ruler, as well as a spiritual leader, controlling lands centered on the city of Rome itself. He retains the title of Pontifex Maximus, once held by Julius Caesar, but his territorial remit is now confined to the Vatican City itself, the result of a treaty between the Church and the Italian dictator, Benito Mussolini, which could hardly have failed to compromise the integrity of the Holy See. In the dark days of the Second World War, some clergy played a heroic role, sheltering Jews and other refugees from the Nazi and Fascist regimes; others collaborated enthusiastically; whilst many more walked a precarious tightrope between collaboration and resistance.

By the 1960s, with the physical and political reconstruction of Europe well underway, the Church was ready for reform. Pope John XXIII (reigned 1958-1963) surprised the Catholic world by summoning the Second Vatican Council, which would replace the Latin Mass with services in the languages of ordinary people; and sweep away many of the material trappings of Medieval ritual; whilst stopping short of the reforms that some of the most liberal commentators might have wished to see (married clergy, reproductive freedoms for the laity, an enhanced role for women within the Church). It continues to influence the shape of Catholic policy today: those who played prominent roles in the Council included the future Popes Paul VI, John-Paul I, John Paul II, and Benedict XVI.

Anthony Burgess's novel, Earthly Powers, spans the first eight decades of the Twentieth Century, including both world wars, and the years following the second. Its unreliable narrator is Kenneth Toomey, a revered English man of letters, thought by many to have been styled on W. Somerset Maugham. Toomey is homosexual, one of the first generation of gay men to have lived more or less openly as such, without suffering the active persecution visited upon predecessors such as Oscar Wilde. 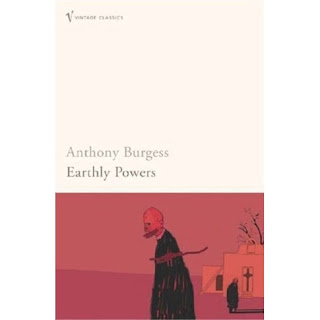 Toomey's sister marries an Italian-American musician, Domenico Campanati, whose brother, Carlo, is an ambitious and reforming churchman, destined to ascend the Throne of Saint Peter as Pope Gregory XVII (he is not exactly a cypher for John XXIII, but there are clear parallels, including the broad timing of his reign). In the background however, is the darker figure of an American evangelist, Godfrey ("call me God, it's just an abbreviation, after all") Manning, with surprising links to the reforming Pope. The novel is a half-serious, half-comic, meditation on power, secular and sacred, set against the background of the world-changing events and vibrant literary personalities (Hemingway, Joyce) of the Twentieth Century.

"It was the afternoon of my eighty-first birthday, and I was in bed with my catamite when Ali announced that the archbishop had come to see me. 'Very good, Ali,' I quavered in Spanish through the closed door of the master bedroom. 'Take him into the bar. Give him a drink ... Give his chaplain a drink also.'"

"Don Carlo's telegram had said he was coming for five days, but in fact he stayed well over a week. He had been gaining a reputation, I gathered, in the field of exorcism, and there was a tough job of exorcism to perform just outside of Nice. The Bishop of Nice had requested his services ... Don Carlo was said by His Grace to be the best man in Europe at fighting the devil, and this was meant very literally. The devil was no metaphor to some of these churchmen but a palpable entity, or rather a well-structured army of entities (hence the name Legion, as in British Legion), with the Son of Morning as generalissimo in charge of Belial and Beelzebub and Mephistophilis, as well as a large number of NCOs and privates eager to fight the bad fight and gain promotion. A lot of nonsense I thought at the time, but Don Carlo was ready to march in with the Rituale Romanum and, so to speak, knock hell out of these minor devils that had camped in the bodies of the innocent."

"On that early October evening in 1958 Carlo Campanti left my life and his ample flesh spilled over from the confines of memoirs into the arena of history. You know as much about Pope Gregory XVII as I. Henceforth I was to see him only blessing fatly in the media, kissing the feet of the poor, weeping with earthquake widows, treading the Via Crucis, embracing criminals and communist leaders, inaugurating the Vatican Council, which, under his leadership, his goading and coaxing and bullying, rather, was to modernise the Church and bring it closer to the needs of the people ... There were strip cartoons in which he was the hero. Kids in jeans and teeshirts sang songs about him:

Pope Gregory Pope Gregory
Free our souls from sin
Rescue the world from beggary
Let the light shine in."