"Omphalos" - A Preview of the Sixth Story - "The Song of Strangers"

The sixth and final story in my forthcoming novel, Omphalos, is set in around 4000 BC. If you are wondering why there is such a large time-gap between the fifth and sixth stories, all I can say is that it should be clear by the time you reach the end of the novel! 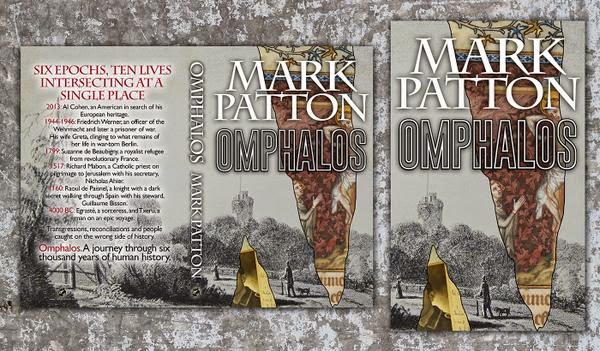 "The Song of Strangers" is, in a sense, a "prequel" to my first novel, Undreamed Shores, in which one of the characters recites a mythologised poem about a journey made by his distant ancestors:

"Towards the setting of the sun they rowed,
Each day departing with the ebbing tide,
Until they reached a river's gaping mouth,
Beneath the shadow of a stony mound,
A place fresh water might be had, and rest,
Climbing the headland, they approached the mound,
And saw that it was built by human hands,
Of stones piled up on stones, piled up on stones.
Into the side of it were caverns wrought,
Eleven caverns built with massive slabs,
Each guarded by a dark-haired sorceress,
And each one took a rower by the hand.
But one of these was lovelier than the rest,
Egraste with her tresses raven-black,
Txeru's hand she took, and led him in,
Into the cavern deep inside the mound ..." 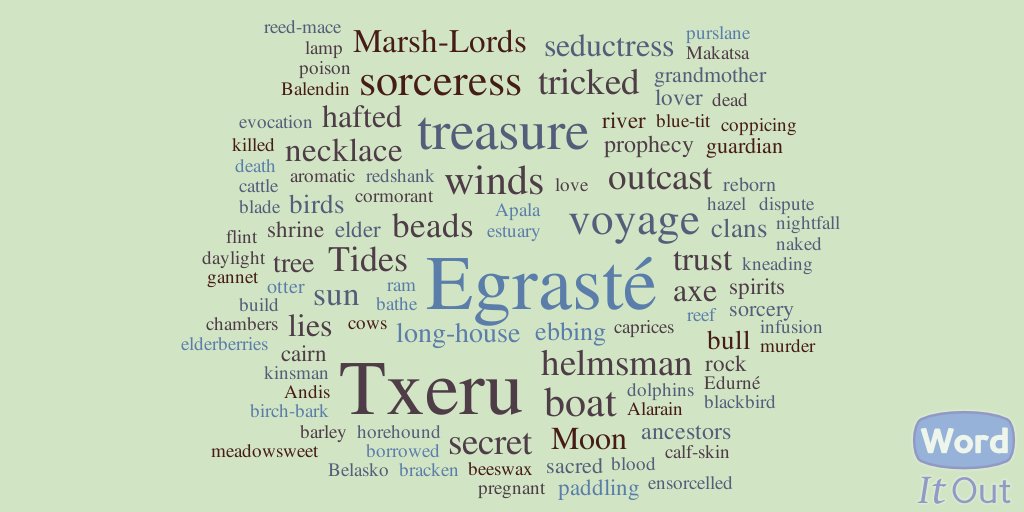 In "The Song of Strangers," I take the reader closer to the world of Egraste and Txeru themselves: they are the protagonists, but there may already be some mythologizing, since the story is recounted, as an oral tale, by Egraste's three-times great-grand-daughter. It is already clear in Undreamed Shores that the version of the story told by the men differs from that told by the women, and now the reader can discover some of the reasons for this. Unreliable narration aside, the mound in question is that of Barnenez, near Morlaix in northern Brittany. Built in at least two phases, the mound covers eleven "passage graves" of varying construction. 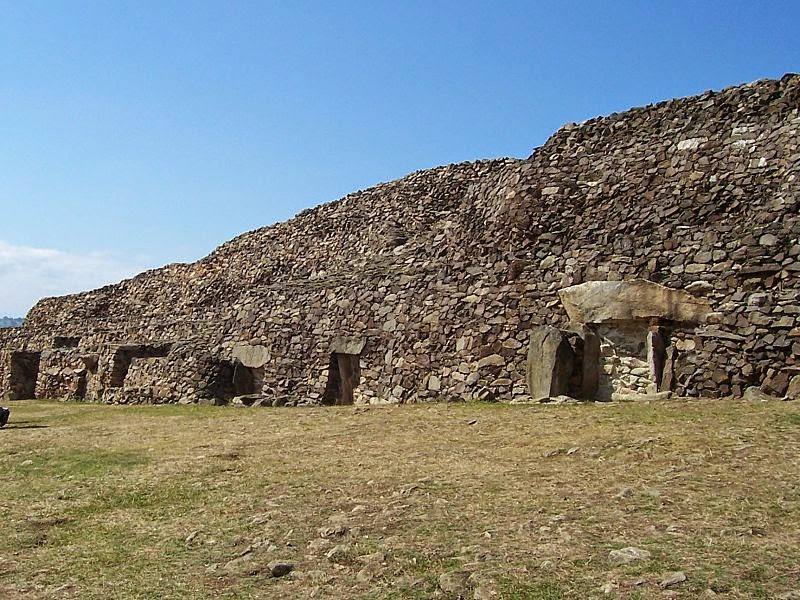 The Neolithic cairn of Barnenez, showing the entrances to the passage-graves. Photo: New Papillon (licensed under GNU). 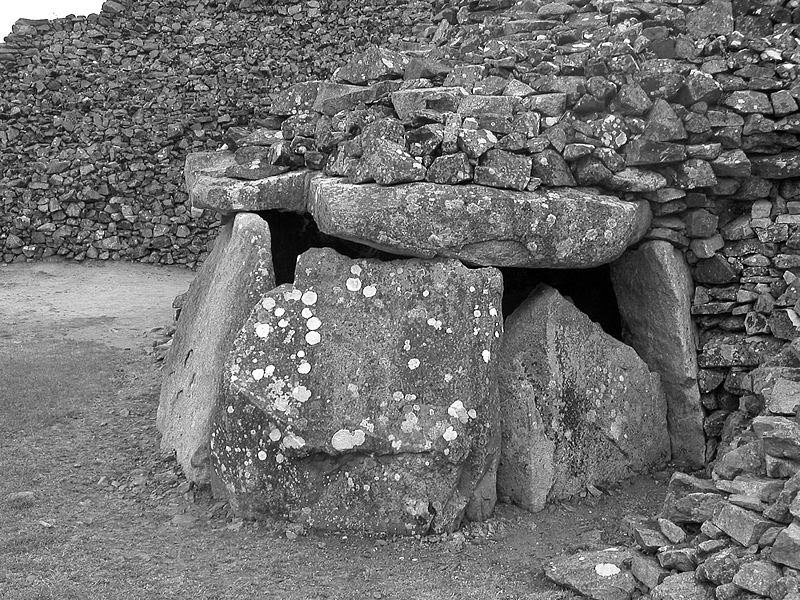 One of the exposed stone chambers at Barnenez. Photo: Schorle (licensed under GNU).

Just what was a "passage grave," and what happened in them? I have spent much of my academic career trying to work this out, and written several books on the subject. Human remains are found in some, but not all passage graves, and, when they are found, they are often fragmentary. They probably were not permanent repositories for the remains of the dead, and they may have been used by the living for a variety of ceremonies in which the ancestors were invoked. 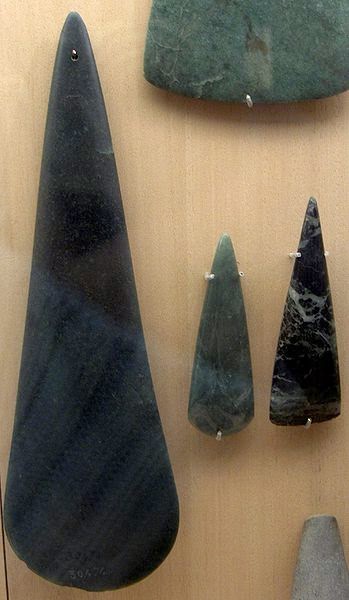 "The Song of Strangers," however, is not just a story about passage graves (they only really feature at the beginning and the end): it is the story of an epic journey; of transgression and reconciliation; of the lengths that men will go to get their hands on "treasure" (in this case, elaborate axes made from precious stone); of truth and lies, and trust stretched to breaking point.

"Egraste walked along the beach as the first streaks of morning light appeared in the autumn sky. She had left Txeru asleep, hoping to escape the memories that haunted her dreams, but now she had another vision to contend with, that of a woman she had never met, her head smashed open with her father's axe, because of Txeru, because he had tricked her.

Laida was not the one he had loved, Ostargi had said. Presumably that meant that she, Egraste, was the one he loved, but what was his love worth, this man who had abandoned Laida to her fate? Who had, perhaps, fathered a child on Nahia, and returned to her village without a word to say to either of them? He could abandon her just as easily." 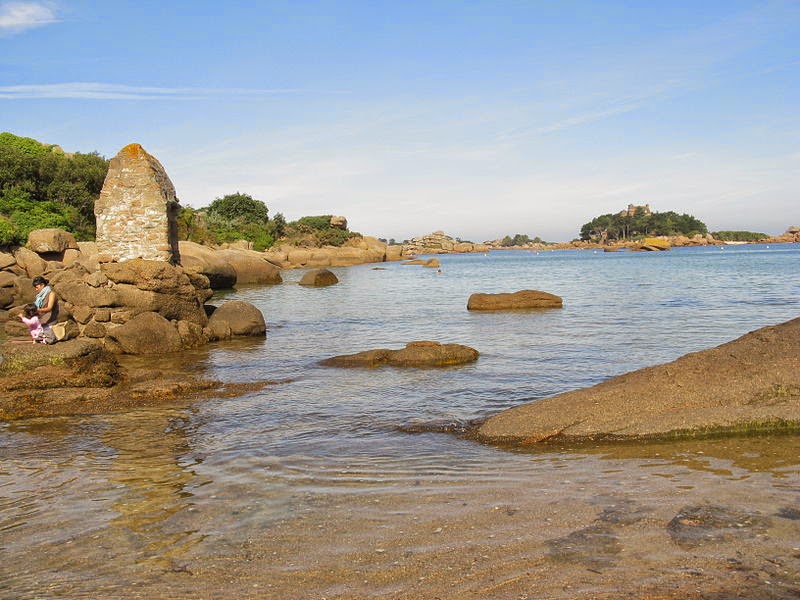