A History of the World in 50 Novels. 7 "The Last of the Wine," by Mary Renault

Around four hundred years after the Mycenaean collapse, trade between Greece and the urban literate civilisations of the east began to be re-established. The Greek alphabet as we now know it was borrowed from the Phoenicians, and the oral traditions of the Bronze and Iron Ages were recast as Europe's earliest written literature. Cities emerged across Greece, many of them centred on the old Mycenaean kingdoms: Athens, Sparta, Corinth, Thebes. 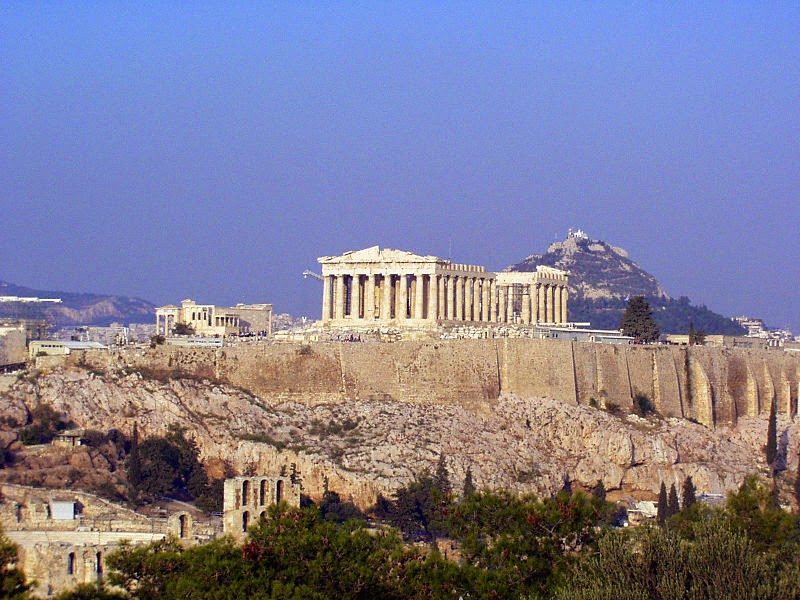 The Acropolis of Athens. Photo: LennieZ (licensed under GNU).

The apogee of classical Greek civilisation was reached in the 5th Century BC, in the "Golden Age" of Athens, which lasted for less than a century (480-404 BC), yet gave the world the concept of democracy; as well as the philosophy of Plato & Aristotle; the tragedies of Aeschylus, Sophocles & Euripides; and the comedies of Aristophanes. 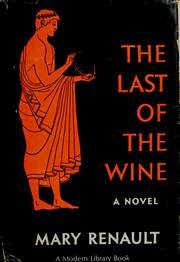 Published in 1956, The Last of the Wine was Mary Renault's first historical novel set in ancient Greece (she wrote several more, including two about the mythical hero, Theseus, and two about Alexander the Great). It is narrated in the first person by Alexias, a fictional nobleman, looking back on the days of his youth. The fortunes of Athens were already beginning to ebb when Alexias was born, the city ravaged by a terrible plague and soon to be embroiled in an ultimately disastrous war with Sparta. 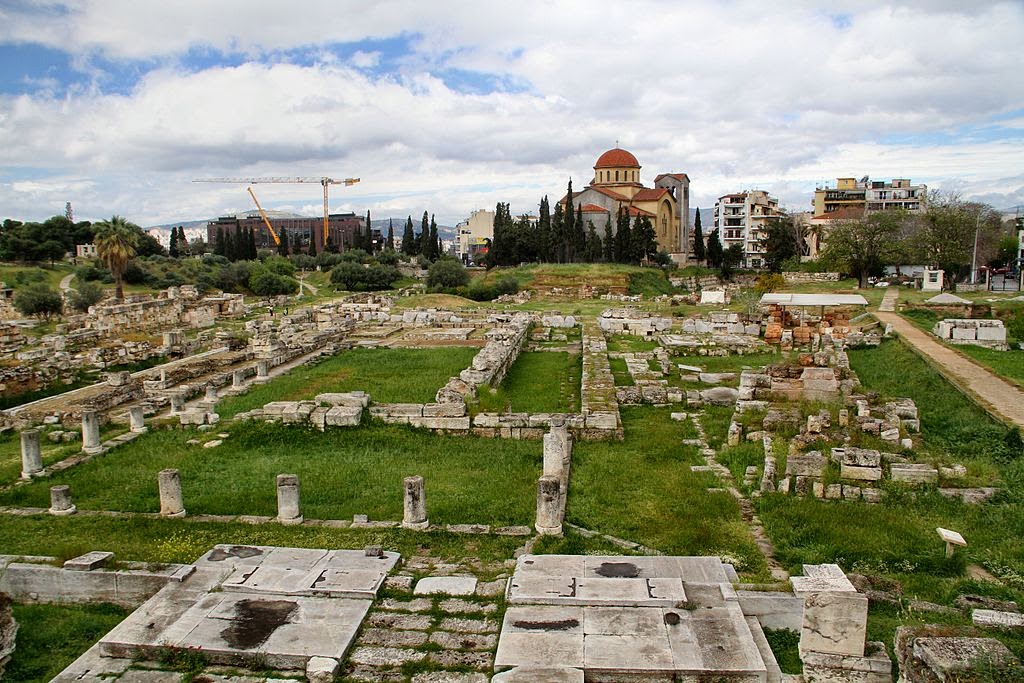 Mary Renault was ahead of her time in her sympathetic portrayal of homosexual relationships between men. The male lover of Alexias's youth is a historical character, Lysis, who features in Plato's dialogues. 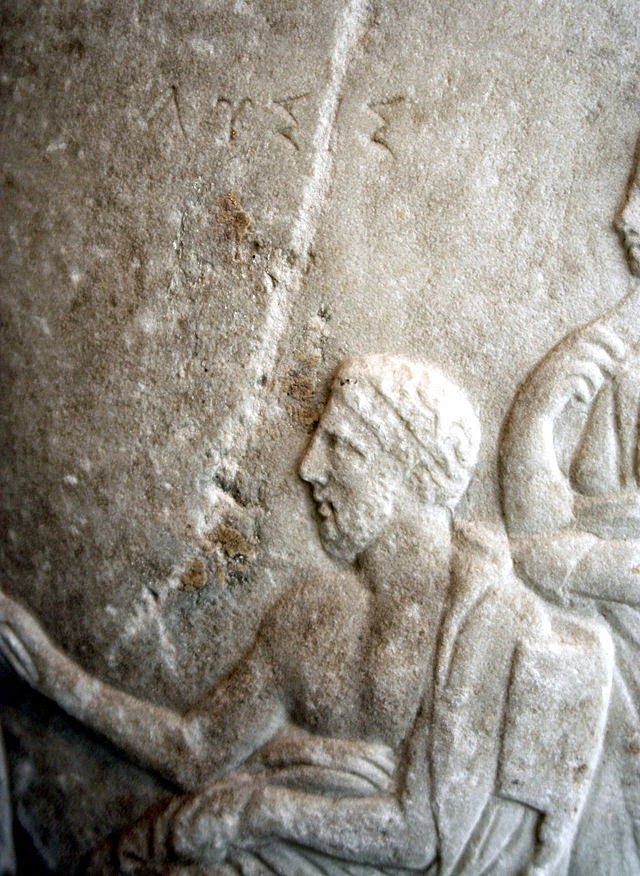 Lysis, as depicted on the grave marker of his son, Timokleides. Photo: Giovanni Dall'Orto (reproduced with permission). 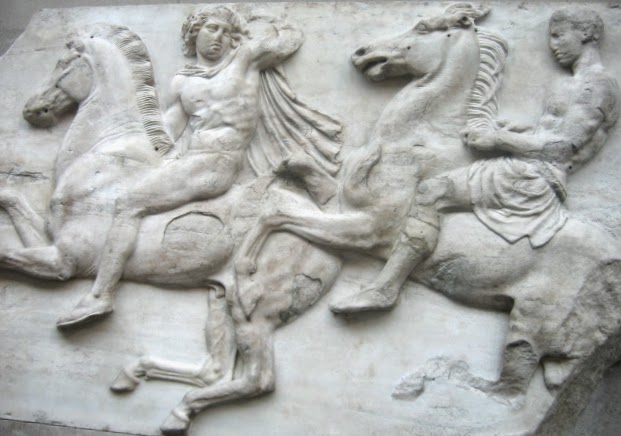 The Athenian cavalry, in which Alexias and Lysis both serve, participating in the parade at the Panatheneic Festival. Image: Gavin Collins (licensed under CCA).

Sex is implied, rather than explicitly described, but Renault successfully captures the emotional frisson of awakening sexuality:

" ... when I had given up hope of him, and had gone to exercise, as I turned the point of the running track I saw him watching at the other end. It was as if a great wind blew at my back and my heels grew wings. I scarcely knew that I touched the ground, and I finished so far ahead of the rest that everyone cheered me. I heard Lysis's voice, and being breathless already from running, and from suddenly seeing him, now I felt as if my heart would burst my breast, and saw black in the sky ... "

The novel is, in large part, the story of the waxing and waning of their relationship, but it is set against the background of tumultuous events which will be familiar to anyone who has read Thucydides: the Peloponnesian War; the surrender of Athens; the rule of the Thirty Tyrants; and the democratic rebellion of Thrasybulus. 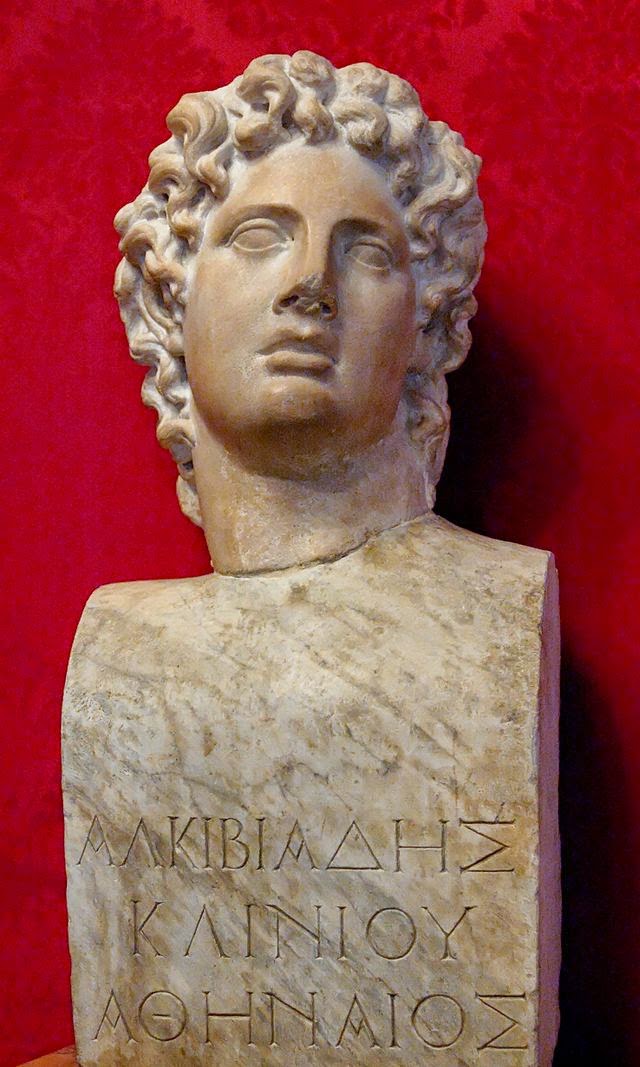 Plato's dialogues provided Renault with a model for the way in which elite men of the 5th Century BC might actually have spoken. A number of the characters are drawn from the dialogues themselves, and are recognisably the same people. Of the world of women, having no such model, she shows us almost nothing, and she does not demur from endowing her male characters with the prejudices evident from her model:

"Some of the women, I believe, blamed the country people for bringing in a curse; as if anyone could reasonably suppose that the gods would punish a state for treating its own citizens justly. But women, being ignorant of philosophy and logic, and fearing dream-diviners more than immortal Zeus, will always suppose that whatever causes them trouble must be wicked ...."

The Peloponnesian War was not a total war in the sense familiar to us from our own times: this much is clear from Thucydides. There was a season for fighting and a season for regrouping: Spartans and Athenians alike would starve if harvests were neglected for too long. Alexias and Lysis take part in the fighting, initially as cavalrymen, and later in the navy, but they also have time to garland themselves with hyacinths for symposia, and to debate philosophy with Socrates in the Agora. Plato himself appears as a minor character. 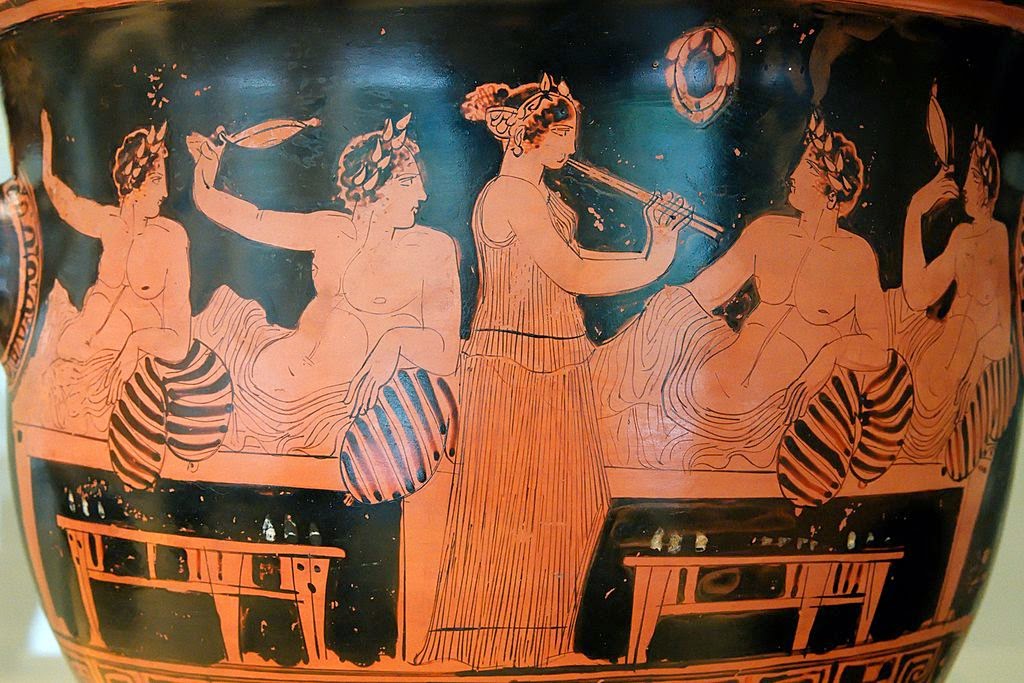 A symposium (male drinking party) as depicted on an Athenian vase of the 5th Century BC. Photo: Marie-Lan Nguyen (reproduced with permission).

The Last of the Wine gives us a fascinating insight into what life might actually have been like for men of a certain class at a particular time and place. Underlying it all is a deep sense of melancholy: Alexias and Lysis live in the shadow of the Golden Age, but it is already collapsing around them, and there is little they can do to prevent it. They are not instinctive democrats, fearing demagogues as much as they fear tyrants. They respect the achievements of their fathers and grandfathers, but are increasingly aware of the price of these achievements (there are dark and, to my mind, prescient, whispers about the atrocities that democratic Athens has itself committed against those who resisted her rise). Even as they embark on their love affair, they know that it cannot last (love between men in 5th Century Athens was seen as a prelude to the responsibilities of marriage, family and public life). The reader understands this as a metaphor for the fate of classical Athens itself, but is drawn in to join the characters in enjoying what remains of its glow.