A History of the World in 50 Novels. 6 "The Penelopiad," by Margaret Atwood

Between 2200 BC and 1600 BC, Bronze Age communities around the Aegean Sea became involved in trade networks that connected them to the literate, urbanised civilisations of Egypt and the Middle East. Some Greek traders probably visited the cities of Egypt and Mesopotamia, whilst many more may have met merchants from those cities visiting Greek ports. Europe's first indigenous civilisations emerged, at first on Crete, and later on the Greek mainland. The Mycenaean civilisation of Greece flourished until around 1100 BC, when it seems to have collapsed amid turmoil and civil war.

The written texts of the Mycenaean civilisation itself are essentially administrative records. They are vitally important historical documents, but they include nothing that can be thought of as "literature." The European literary tradition began some 350 years after the Mycenaean collapse but, crucially, the foundation stories of that tradition, telling of the Trojan War, and of the wanderings of the hero, Odysseus, appear to be set in the Mycenaean era itself, and clearly draw on earlier storytelling traditions. 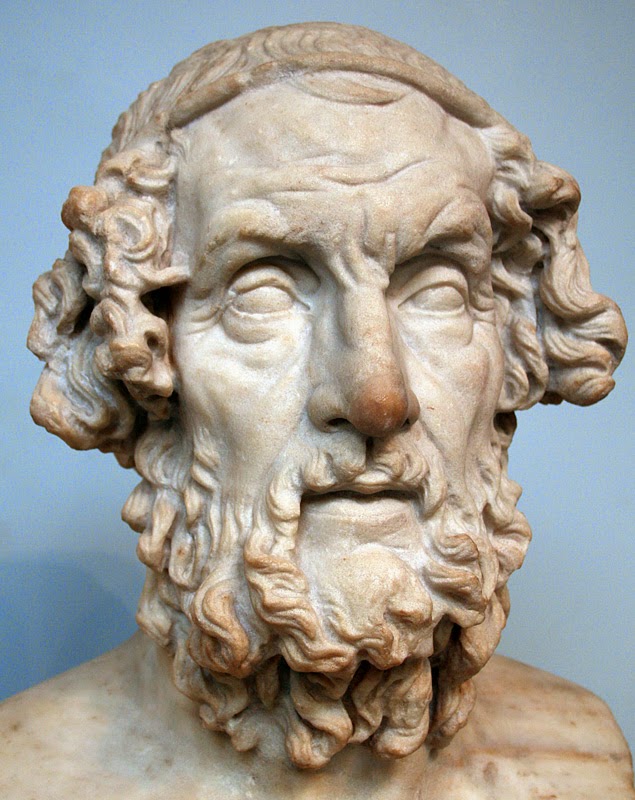 Homer, the author of the Iliad and Odyssey, foundation texts of the European literary tradition. Roman copy of a lost original statue of the 2nd Century BC (British Museum). Photo: Yonidebest (image is in the Public Domain). 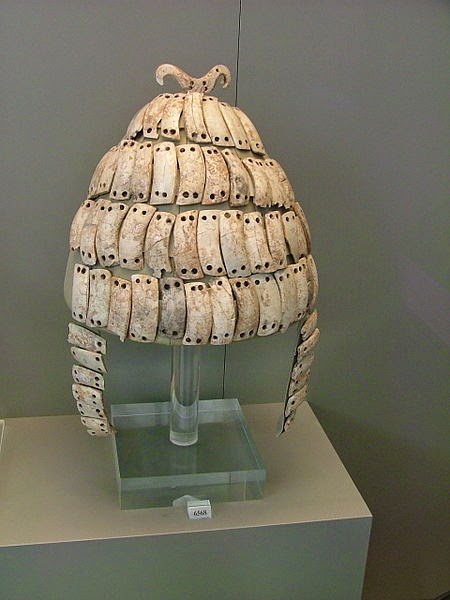 A Mycenaean boar-tusk helmet (National Archaeological Museum of Athens). There is an accurate description of such a helmet in Book 10 of The Odyssey. Photo: Dorieo (licensed under CCA). 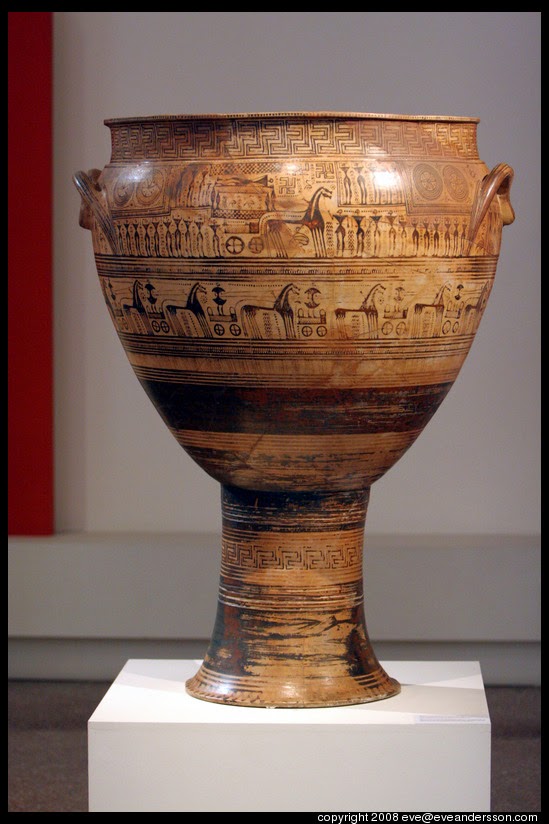 Greek Geometric-style krater, possibly made during Homer's lifetime, and depicting a funeral procession similar to that for Patroclus in The Iliad (British Museum). Photo: Jonathan Gross (licensed under CCA).

Margaret Atwood's novel, The Penelopiad, is, on one level, a reworking of Homer's Odyssey, but, whereas Homer narrates from the viewpoints of Odysseus himself, and of his son, Telemachus, who goes in search of him, Atwood explores the story from the perspective of the women who remained on Odysseus's home island of Ithaca. 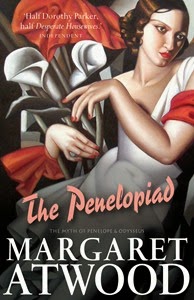 Rather than immersing the reader in the world of Odysseus's wife, Penelope, and her maids, Atwood prefers to keep us anchored in our own culture, where we at least aspire to equality between women and men, and in which there is nothing normal about slavery or summary execution. She therefore brings her characters into our world in spirit form, and with a full understanding of the changes that have taken place since the passing of their own time on Earth. 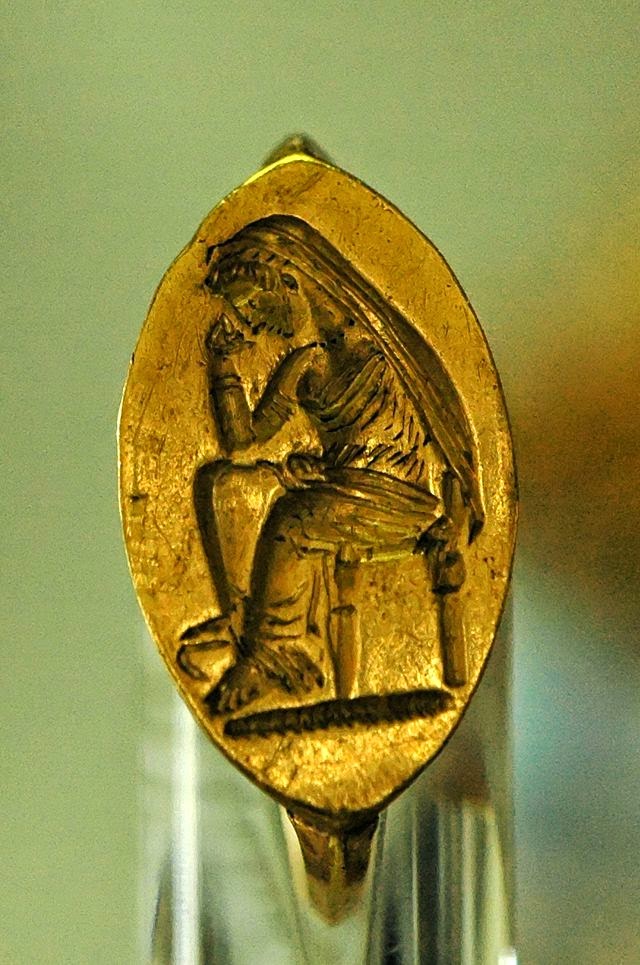 Depiction, believed to be of Penelope, on a gold ring of the 5th Century BC from Syria. Photo: Jastrow (image is in the Public Domain).

"Every once in a while," Atwood's Penelope tells us, "the fogs part and we get a glimpse of the world of the living. It's like rubbing the glass on a dirty window, making a space to look through. Sometimes the barrier dissolves and we can go on an outing ... it did allow us to keep up with what was going on among the still-alive. I was very interested in the invention of the light bulb, for instance, and in the matter-into-energy theories of the twentieth century ..."

Penelope tells us her own story in her own words, but it is not, in all respects, the story familiar to us. Atwood draws on ancient sources other than Homer, and imagines the life of the women's quarter of a Mycenaean palace, of which the ancient writers tell us almost nothing. She does not, however, give us definitive answers to the most obvious questions (was Penelope really as patient and faithful as we have been led to believe? Was she complicit in the bloodbath enacted by her husband and son at the end of the story?). As a narrator, her Penelope is almost as unreliable as her husband always was:

"The two of us were - by our own admission - proficient and shameless liars of long standing. It's a wonder either one of us believed a word the other said. But we did."

Which doesn't necessarily mean that we should do so! 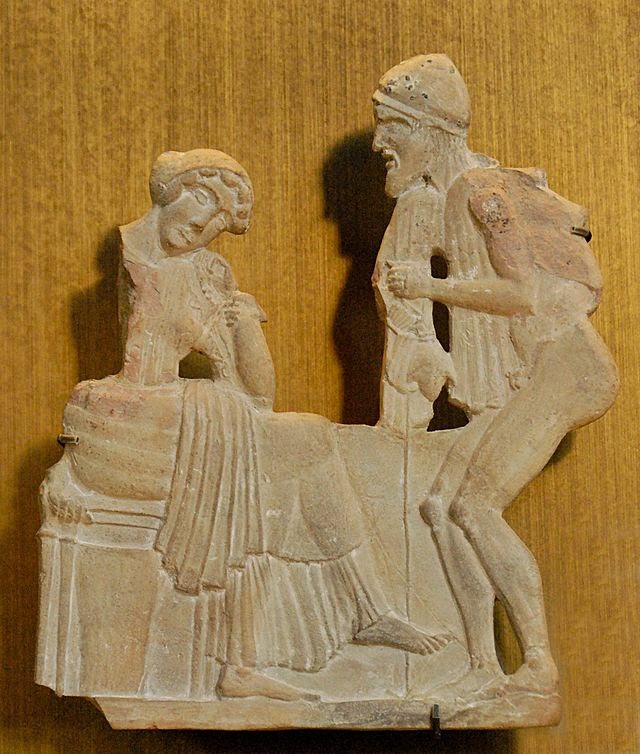 Odysseus and Penelope, terracotta relief of c450 BC from Milo (The Louvre). Photo: Jastrow (image is in the Public Domain).

Penelope's autobiographical narrative is interrupted from time to time by the voices of her maids. These interventions are inspired by a brief (and often overlooked) passage in Book 22 of The Odyssey:

"Now when they had made an end of setting the hall in order, they led the maids forth from the stablished hall, and drove them up in a narrow space between the vaulted room and the goodly fence of the court ... [Telemachus] tied the cable of a dark-prowed ship to a great pillar and flung it around the vaulted room, and fastened it aloft, that none might touch the ground with her feet ... about all their necks nooses were cast, that they might die by the most pitiful death. And they writhed with their feet for a little space, but for no long while."

In the novel, the maids take on the role of a chorus, "burlesquing the main action" like "the satyr plays performed between serious dramas," as Atwood says in her post-script.

"Oh wily Odysseus he set out from Troy,
With his boat full of loot and his heart full of joy,
For he was Athene's own shiny-eyed boy,
With his lies and his tricks and his thieving!

... Here's a health to our captain, so gallant and free,
Whether stuck on a rock or asleep 'neath a tree,
Or rolled in the arms of some nymph of the sea,
Which is where we would all like to be, man!"

(This the maids perform as a "sea-shanty," dressed in sailor costumes).

There is much wit and humour in the cavorting of the maids, but behind it all are a number of serious points. However we gain access to the remote (or even more recent) past, whether through conventional history, or ancient literature, or even archaeology, the lives of some people are a lot more visible than those of others. Often it is fiction that is best placed to shine a light into corners that are seldom illuminated in other ways.