A History of the World in 50 Novels. 4 "Khufu's Wisdom," by Naguib Mahfouz

In a very few places in the world, the adoption of agriculture was followed, over a period of several millennia, by the emergence of complex societies characterised by cities, centralised power, written language and bureaucracy. In the Old World, this happened, arguably, in just three places: between the valleys of the rivers Tigris and Euphrates; along the valley of the Nile; and around the basin of China's Yellow River. 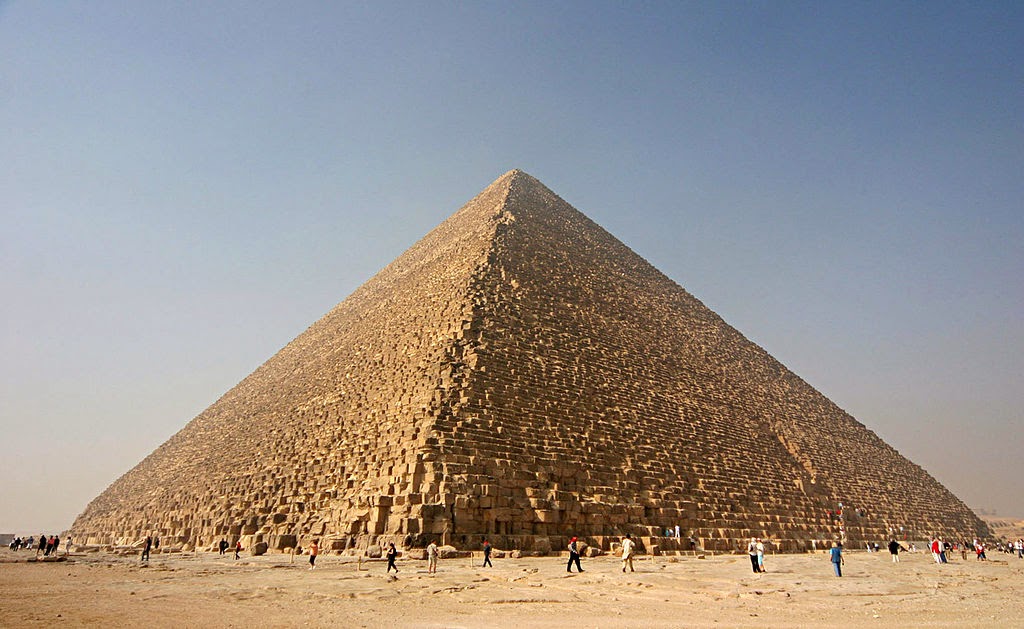 The Great Pyramid of Giza, burial place of the historical Khufu, and the construction of which is part of the background to Mahfouz's novel (image is in the Public Domain). 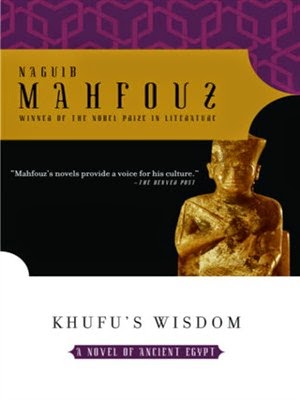 Naguib Mahfouz, Egypt's only Nobel laureate for literature, chose the dawn of Egyptian civilisation as the setting for his 1939 debut novel, Khufu's Wisdom. It is the first of three early novels set in ancient Egypt (the others being Rhadopis of Nubia and Thebes at War), but they do not form a trilogy in the usual sense (they do not follow on directly from one another, and each has its own cast of characters). Khufu's Wisdom begins and ends with the character of Khufu himself, the Pharaoh for whom the Great Pyramid was built.

"The possessor of Divine Grandeur and Lordly Awe, Khufu, son of Khnum, reclined on his gilded couch, on the balcony of the antechamber overlooking his lush and far-flung palace garden. This paradise was immortal Memphis herself, the City of the White Walls." 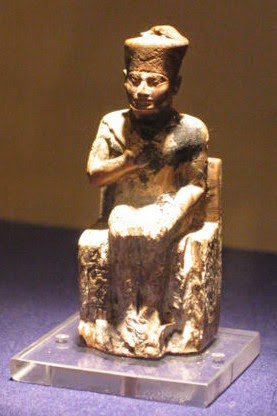 Ivory statuette of Khufu (image is in the Public Domain).

What we know historically of Khufu's reign in the 26th Century BC is limited: the most frequently quoted sources were written many centuries later (Herodotus in the 5th Century BC; Manetho in the 3rd Century BC; Diodorus Siculus in the 1st Century BC), and have more the ring of legend than of history about them. This lack of definitive historical knowledge, of course, gives Mahfouz free reign to build his fictional world. At an early stage, he has his Khufu reflecting on the nature of power itself:

" ... what brought me from being a prince into possession of the throne and of kingship was nothing but power. The covetous, the rebellious, and the resentful never ceased searching for domains to wrest from me, nor in preparing to dispatch me to my fate. And what cut out their tongues, and what chopped off their hands, and what took their wind away from them was nothing but power ... what made my word the law of the land, and what taught me the wisdom of the gods, and made it a sacred duty to obey me? Was it not power that did all this?"

I take it as a mark of really good historical fiction when I have frequently to check whether a detail is real or invented and, as with Robert Graves's I, Claudius, I certainly found that to be the case with this book. The architect, Mirabu, is fictional, as is the oft-quoted philosopher, Kagemni (there was a real Kagemni, who served as Vizier of Egypt, but he lived around two centuries after Khufu). Mahfouz, however, did not start with a blank page. He takes some themes from the Ptolemaic Egyptian historian, Manetho, but he also makes extensive use of a fascinating source known as the Westcar Papyrus, written between 2000 and 1700 BC. 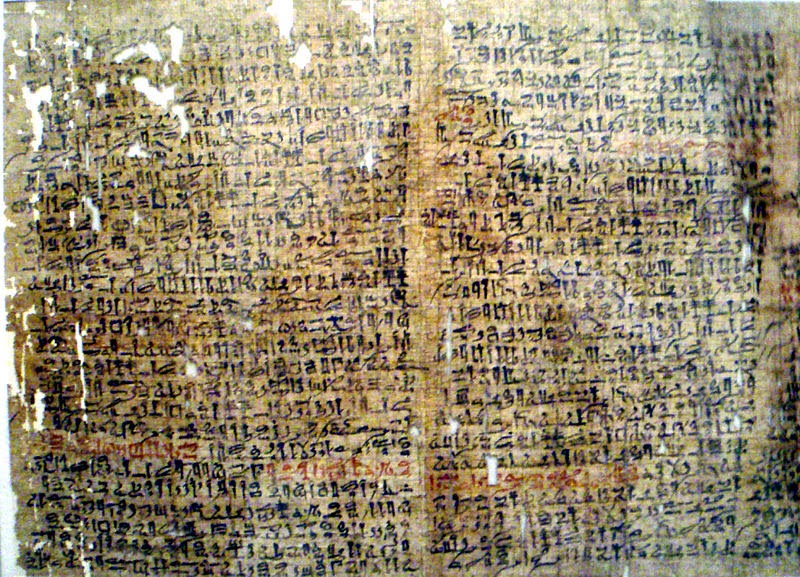 The Westcar Papyrus, now in the Egyptian Museum, Berlin. Photo: Keith Schengili-Roberts (image is in the Public Domain).

I could say a good deal more about this papyrus, and will, perhaps, do so at a later date, because it has a fascinating place in the history of storytelling. It is, in effect, a collection of five short stories, each recounting a tale supposedly told at Khufu's court by his various sons. These tales of priests, magicians and miracles are perhaps the earliest works of historical fiction to have survived into our own time. From them, Mahfouz takes several of his characters, and some elements of his plot, but from them he also takes significant stylistic conventions, in a bold attempt to create a literary aesthetic that is uniquely Egyptian, without being either Arab or Islamic. 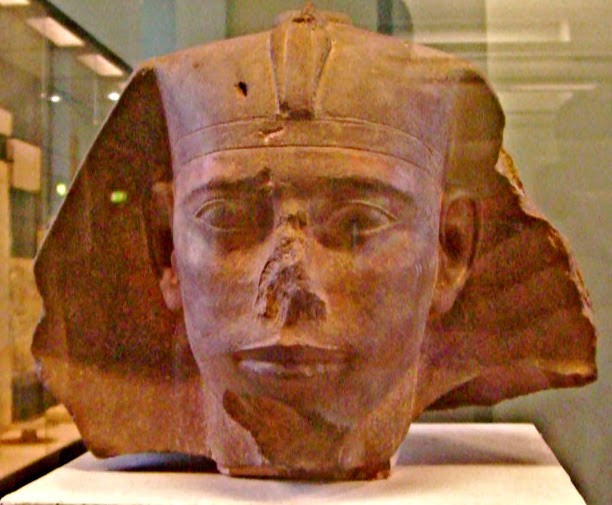 Head of Djedefre, Khufu's immediate successor, and a significant character in the novel. Photo: Anneke Bart (image is in the Public Domain). 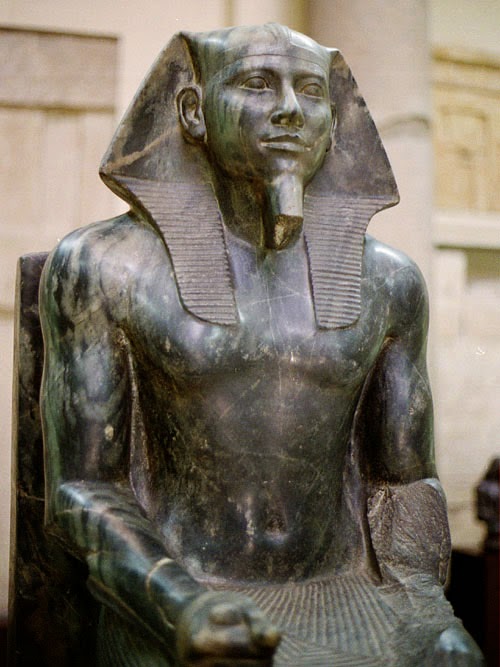 Statue of Khafra, historically the successor to Djedefre, but also the villain of Mahfouz's novel. We know little of his character but Mahfouz's account of his life is counter-factual.

Mahfouz's Khufu is not wise at the beginning of the novel, but he becomes wise by the end as, from his deathbed, he looks back on his life. He has, in effect, "discovered" the dangers of hubris, two thousand years before the Greek tragedians:

"Some twenty years ago, I proclaimed a war against the Fates, ruthlessly challenging the will of the gods ... Everything appeared to me that it would proceed according to my own desire, and I was not troubled by doubt of any kind. I thought that I had executed my own will, and raised the respect for my word. Verily, today, my self-assurance is made ridiculous, and now - by the lord - my pride is battered ... "

Khufu's Wisdom is an early work by a writer whose career spanned seven decades. It does not read like a modern English novel, precisely because Mahfouz was attempting to define the modern Egyptian novel. It is, however, a stunningly original attempt to bring to life an epoch that is almost unimaginably distant from our own, and to get as close as anyone could ever get to understanding that period on its own terms.

Mark Patton's novels, Undreamed Shores, An Accidental King and Omphalos, are published by Crooked Cat Publications, and can be purchased from Amazon UK or Amazon USA.
Posted by Mark Patton at 01:17