Caratacos - The Man Behind the Myth

As a symbol of native British resistance to the Roman invasion of the 1st Century AD, the name of Caratacos (or Caractacus, or, to the Welsh, Caradoc) stands alone beside that of Boudicca. He has inspired a cantata by Edward Elgar, and features as a character in a number of novels, from Henry Treece's The Dark Island, through Manda Scott's Boudicca series to Douglas Jackson's Claudius. We have no idea what he looked like, but William Blake's imagined portrait of him seems to have stuck in the public imagination, and has influenced many of the fictional descriptions of him, including my own. Caratacos, as imagined by William Blake (image is in the Public Domain).

What we actually know about him is quite limited. He was one of the three acknowledged sons of the Catuvellaunian king, Cunobelinus. During his father's lifetime, he seems to have been closer to his uncle, Epatticos, and together they waged war against the Atrebates and Regnenses, extending the territory of his tribe southward into Hampshire and West Sussex.

Coin of Caratacos, minted at Silchester (image is in the Public Domain).

These conflicts, apparently continued by Caratacos after the deaths of his father and uncle, provided the Emperor Claudius with the pretext for invasion, when Verica, probably one of the heirs of Julius Caesar's unreliable ally, Commius, fled to Rome.

According to Cassius Dio, Caratacos and his brother, Togodumnus, were defeated in battle by the Romans (probably at the crossing of either the Medway or the Thames), with Togodumnus being killed, and Caratacos escaping. Shortly afterwards, the Catuvellaunian stronghold of Camulodunum (Colchester) capitulated to the Romans, and Claudius Caesar personally took the surrender of a number of British chieftains. Caratacos, however, was not amongst them.

He travelled west, presumably with some of his elite warriors, and later appeared in the territory of the Ordovices, in what is now Wales, as the leader of a guerrilla insurgency against Roman expansion. Although many of the tribal elites may have been linked by marriage, the territories of the Catuvellauni and the Ordovices were very far apart, and Caratacos must have had remarkable charisma, as a defeated king, to be accepted as a leader by such a distant people.

According to Tacitus, Caratacos's insurgency continued for nine years before he was defeated in a major battle somewhere in the Welsh marches. The precise location of the battle is not known, but Caer Caradoc in Shropshire has been suggested (perhaps only because of its name), as has the "British Camp" near Malvern. 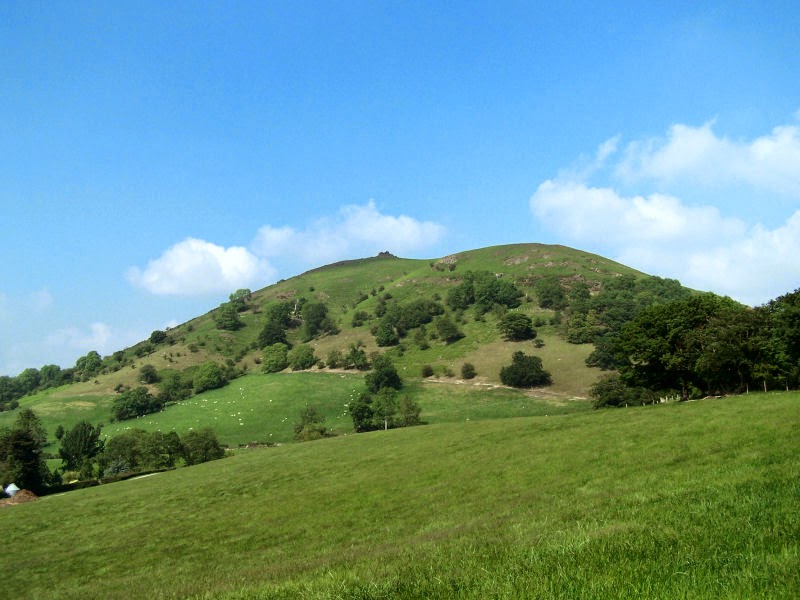 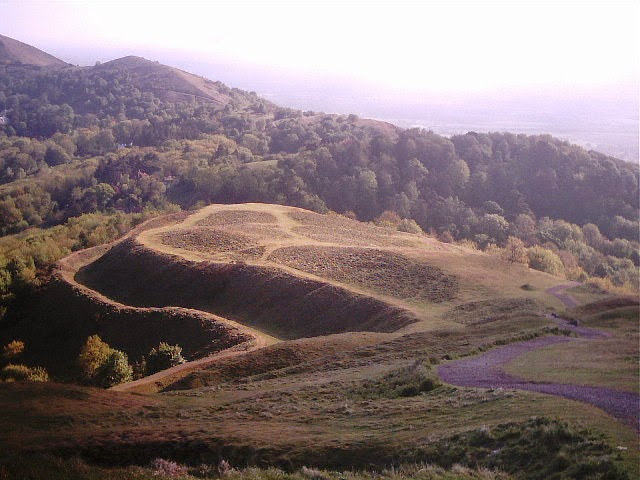 Tacitus tells us that Caratacos's wife and daughter were captured, but that Caratacos himelf escaped into the territory of the Brigantes. It seems unlikely that he would knowingly have thrown himself upon the mercy of their queen, Cartimandua, who was known to be a Roman ally. It may be that he had some sort of agreement with her husband, Venutios, which would have entailed her overthrow. The plan back-fired, and Cartimandua handed Caratacos over to the Romans.

He was taken to Rome, and brought before Claudius. There, according to Tacitus (who may actually have been present), he gave the speech which evidently inspired Claudius to spare his life, and probably contributed more than anything to Caratacos's enduring reputation:

"Had my lineage and my rank been matched by my moderation in success, I should have entered this city rather as a friend than as a captive; nor would you have scorned to admit to a peaceful league a king sprung from famous ancestors and holding sway over many peoples. My present lot, if to me a degradation, is to you a glory. I had horses and men, arms and riches: what wonder if I lost them with a pang? For if you would rule the world, does it follow that the world must welcome servitude? If I were dragged before you after surrendering without a blow, there would have been little heard either of my fall or of your triumph: punishment of me will be followed by oblivion; but save me alive, and I shall be an everlasting memorial of your clemency." 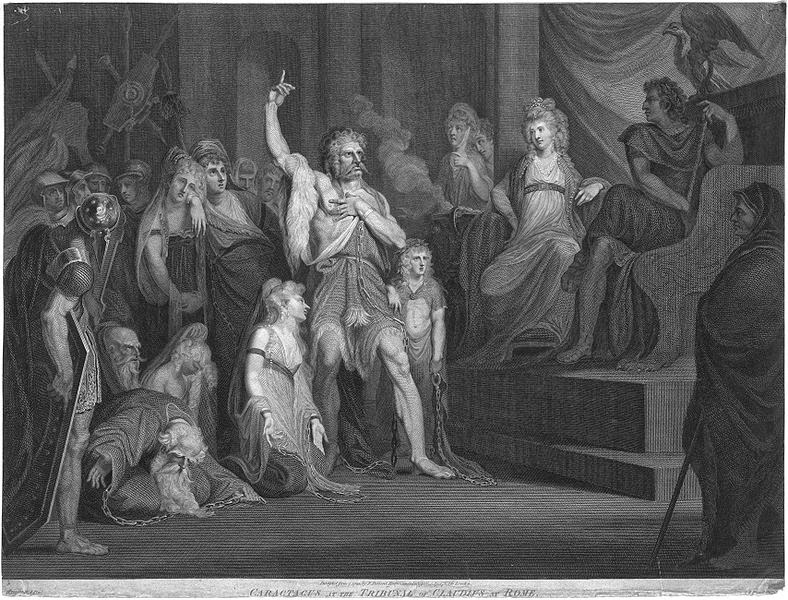 Caratacos before Claudius. 18th Century Engraving by Andrew Birrell, from a painting by Henry Fuseli (image is in the Public Domain).

Caratacos was allowed to live out his days in Rome, presumably with his wife and daughter, although nothing is known about the time he spent there. Subsequent traditions, including the suggestion that he later became a Christian (or had already converted before his capture), have no sound basis in evidence. He had, however, secured his place in history.

Mark Patton's novels, Undreamed Shores and An Accidental King, are published by Crooked Cat Publications. E-book editions can be purchased from the Crooked Cat Bookstore, and paperback versions from Amazon UK and Amazon USA.
Posted by Mark Patton at 03:11