A History of the World in 50 Novels. 15 - "The Sea Road," by Margaret Elphinstone

In strictly chronological terms, this book and the next might be thought to appear on my list in the wrong order, but this post seems to follow on more logically from the previous one and, as we shall see in the next, placing some works in any chronological succession is a complex matter.

The peoples of Scandinavia had never been subject to the Roman Empire, and had developed a rich cultural and artistic tradition with roots going back deep into prehistory. In the 6th, 7th and 8th Centuries AD, as Gaul and Britain recovered from the chaos of the empire's collapse, these Norse cultures seized the opportunity to expand. Between 793 and 850 AD, Viking raiders attacked monasteries and towns along the east coast of England. The raids were followed by settlement, and the emergence of Norse cities such as York and Dublin, linked by trade networks that extended through Russia as far as the Black Sea and the Byzantine Empire.

For some, however, the old world was not enough. If there was an ocean, there must surely be something on the other side of it, and the Viking trading ship, the Knarr, provided them with the means of exploring it. 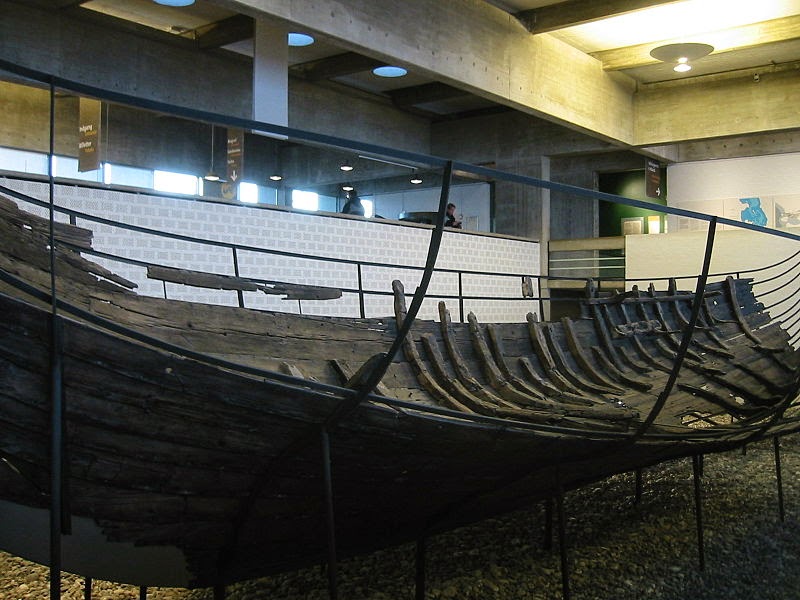 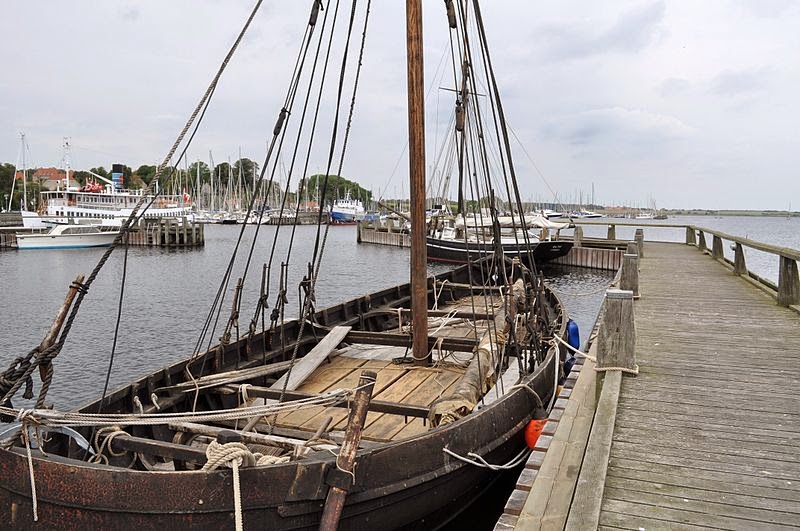 In the last years of the 9th Century, a Norse settlement was established on Iceland and, in less than a hundred years, the settlement of Greenland had begun. The settlement of Brattahlid, on Greenland, was established in the 980s by Eirik the Red, banished from Iceland for killing a man. Eirik's son, Leif, sailed west and landed on the coast of Newfoundland in 1002, and this was followed by further expeditions over the next few years. This is the first documented contact between Europe and the Americas, and it continued, at least sporadically, until the 14th Century. 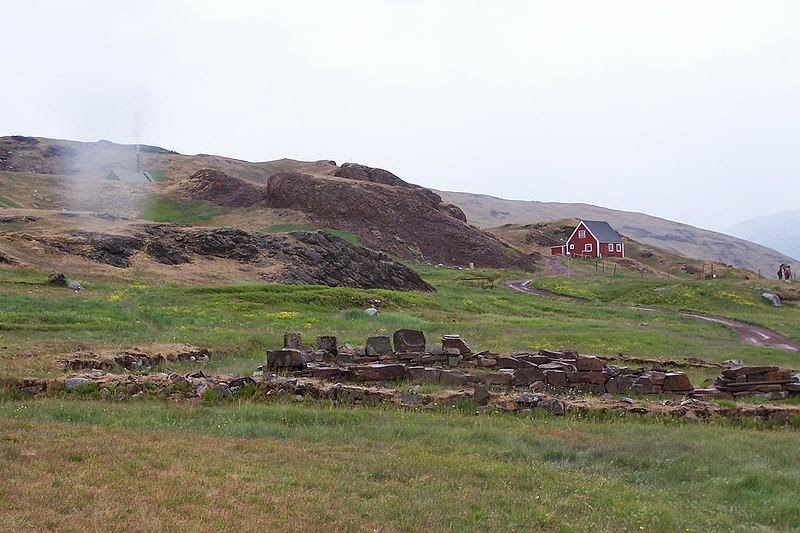 The ruins of Eirik the Red's setllmenet at Brattahlid, Greenland. Photo: PederM (licensed under CCA).

Margaret Elphinstone's novel, The Sea Road, is a first person account from the point of view of Gudrid Thorbjarnardottir, one of the first European women to make a life in the Americas. A historical figure, Gudrid was born in Iceland, travelled to Greenland with her father, and was married three times, first to a merchant named Thorir, then, after his death, to Eirik the Red's son, Thorvald, and finally to another explorer, Thorfinn Karlsefni. Thorfinn and Gudrid's son, Snorri, was probably the first European to be born in the Americas. After Thorfinn's death, Gudrid converted to Christianity, and made a pilgrimage to Rome. 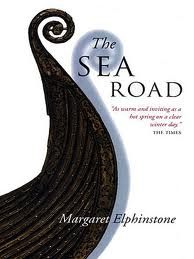 In the novel, she recounts her story to Agnar Asleifarsson, an Icelandic monk in Rome, and we hear his voice as well as hers. Sometimes she addresses him (and, through him, the reader) in the second person and, in other passages, Elphinstone presents Gudrid's thoughts to us in the present tense.

Asleif: "I wrote down her story in obedience to a command from Cardinal Hildebrand in Rome. When she arrived there first, he received her, and later he sent for me. These were his words. 'A woman has arrived here on pilgrimage from your country ... This woman, apparently, is one of those who have gone beyond the confines of the mortal world, in the body. She has dwelt for over a year in the lands outside the material world. She has talked with demons and with the ghosts of the dead ...'" 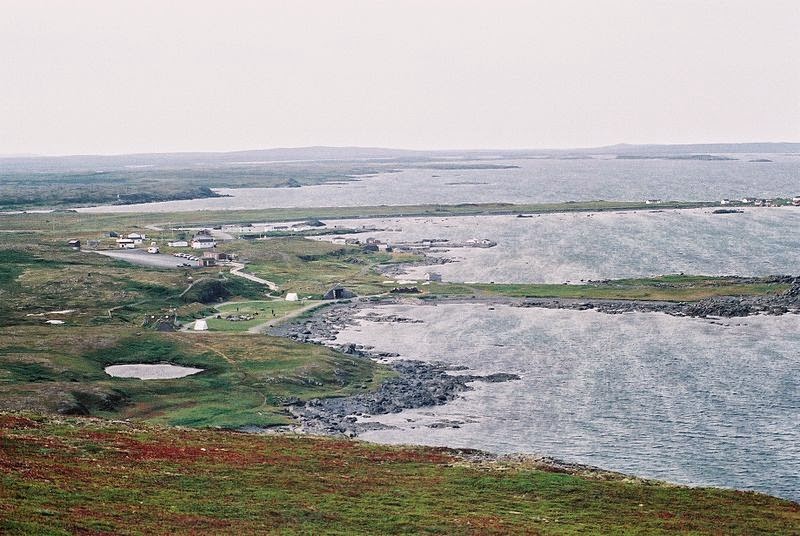 Gudrid: "You must understand, Agnar, that the plan was to make a trading post in Vinland, not a farm. None of us wanted to settle permanently so far out of the world, at least, not until the trade was coming, and then the place might attract settlers. Leif and Karlsefni wanted to make sure of their own rule before they encouraged anyone else. So we were to build up Leif's houses into a winter settlement that could be a base for all future expeditions." 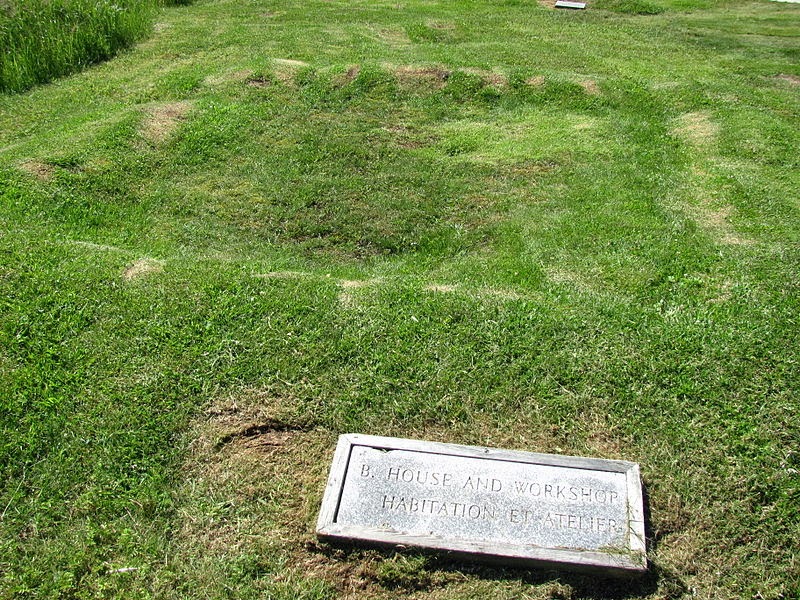 The remains of a Viking house at L'Anse aux Meadows. Photo: Torbenbrinker (licensed under CCA). 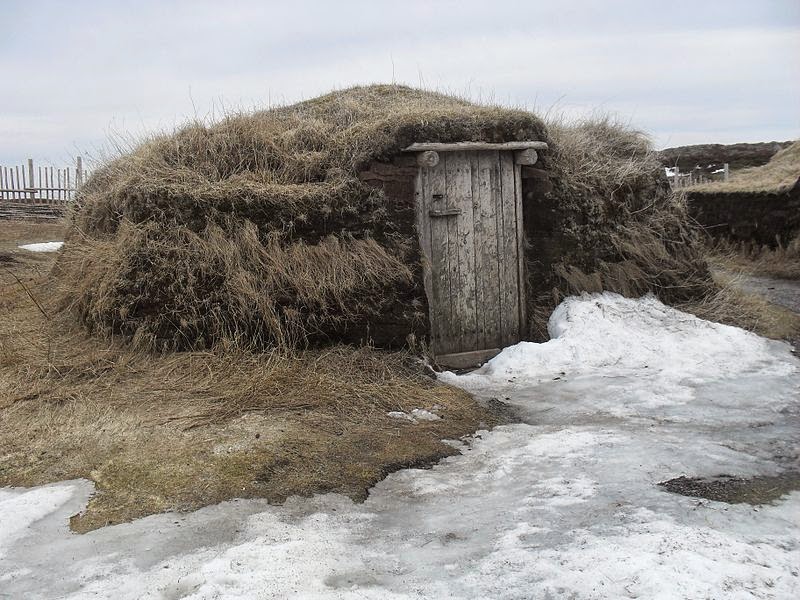 Elphinstone: "The ghosts gather in the shadow of the mountain, and look down on Sandnes. They see a patch of green pasture, hayfields in squares like blankets spread to dry. They see buildings like spindlewhorls hanging by the threads of paths woven by hooves and footsteps. A strip of shore hems the settlement, and needle-shaped boats are tucked in here and there along its length. The ghosts see how carefully made the place is, how neatly it is threaded together, but how fragile the green material is, spread between the bare rock and the sea."

This mixed narrative style could easily make for a fragmented account but, in Elphinstone's hands, it really does give the impression of a series of dialogues stretching out across the centuries.