The Roman Empire reached its high point during the reigns of the "five good emperors." The last of these emperors, Marcus Aurelius, generally thought of as one of the best, was succeeded by his son, Commodus, almost universally considered to have been one of the very worst. From this point onwards, the history of the empire is one of decline. Part of the problem, as Hadrian had well understood, was that the empire was becoming too big to be controlled effectively from a single centre.

After a long period of civil wars, the Emperor Diocletian attempted to stabilise the administration by dividing the empire into four parts, with four "tetrarchs" sharing power between them. Nicomedia (Izmet, in modern Turkey) would be the base for the Eastern Augustus; Sirmium (in Serbia) that of the Eastern Caesar; Augusta Trevororum (Trier, in modern Germany) that of the Western Caesar; and, most surprisingly, Mediolanum (Milan), the capital of the Western Augustus, responsible for Italy and Africa. Rome itself would slip into increasing irrelevance. 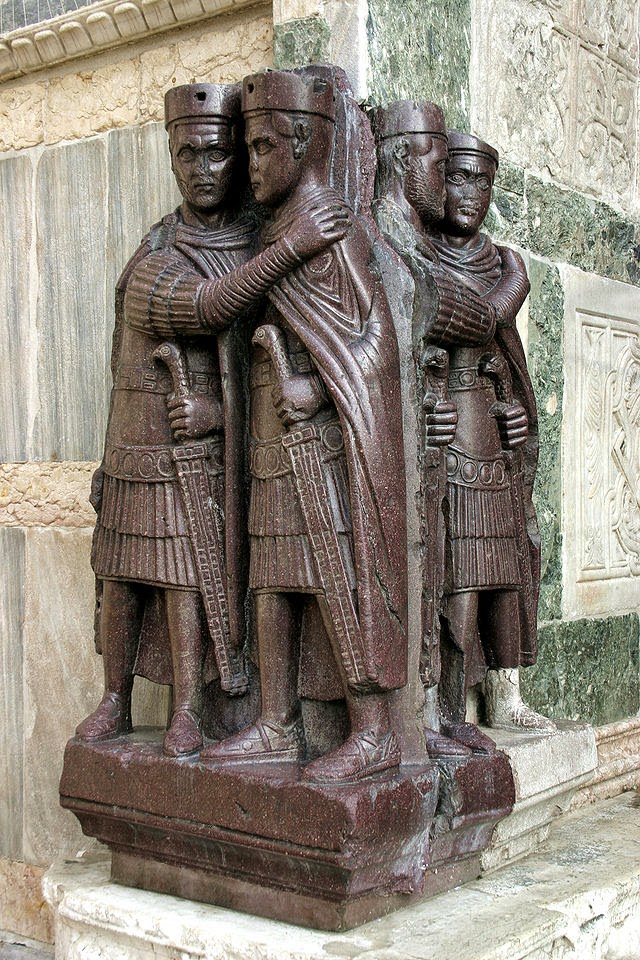 Four tetrarchs, late 4th Century statue now in the Treasury of St Mark's Venice. The way in which each tetrarch embraces a colleague with one hand, whilst gripping his sword-hilt in the other is an apt metaphor for the political realities of the system. Photo: Nino Barbieri (licensed under GNU).

Constantine I fought his way to power over the whole of the empire in 324 AD, and managed to hold it together until his death in 337 AD. Although his reign lasted only thirteen years, he made two profound decisions which would change the history of the world forever. The first was to embrace Christianity (it is by no means clear that he ever did so wholeheartedly). The second was formally to move his capital from Rome to Byzantium (later renamed Constantinople). 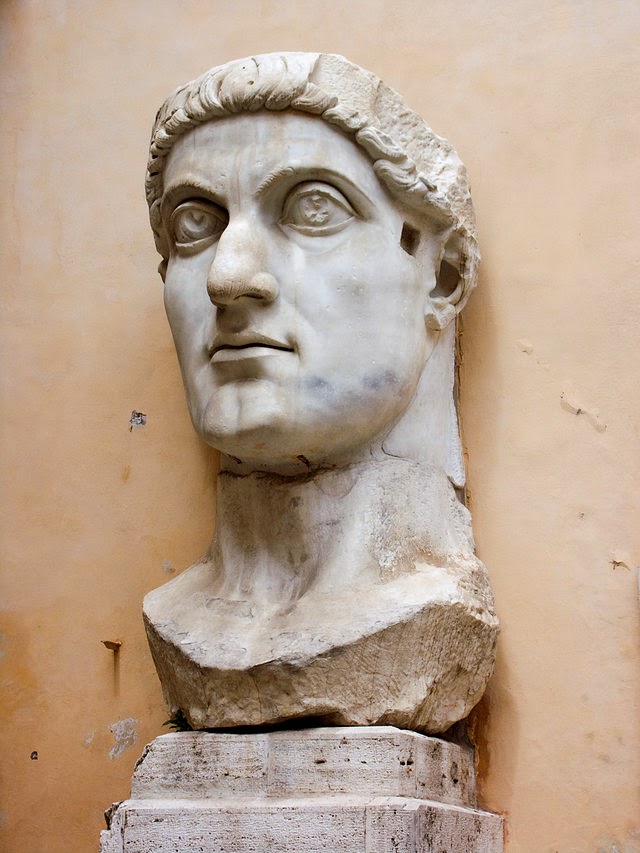 After Constantine's death, the empire was once more divided, this time between his three sons, all of them fervent Christians. One of these sons, Constantius II, appointed a cousin, Julian, as Caesar of the West but, at Paris, in 360 AD, his troops proclaimed him Augustus. Civil war looked inevitable, but Constantius died (apparently of natural causes) naming Julian his heir. As a young man, Julian had been baptised a Christian, and had studied in Athens under two of the leading theologians of the day, Saint Basil the Great and Saint Gregory of Nazianus. He had also, however, been initiated into the pagan mysteries of Eleusis.

Saint Gregory of Nazianus, fresco from Kariye Camil, Turkey (image is in the Public Domain).

As Emperor, Julian abandoned Christianity entirely (earning himself the epithet, "the Apostate"), and did everything possible to revive pagan traditions, temples and oracles. He even promised to rebuild the Jewish temple at Jerusalem. He presented himself as a restorer of traditional "Roman" values, but had never set foot in Rome, and his own religious beliefs owed more to the Greek than to the Roman tradition (he was strongly influenced by Neo-Platonism).

A number of his letters and orations have been preserved, all of them in Greek, rather than Latin. They do, however, give us a more intimate picture of Julian, as an individual, than we have for most Roman emperors, including a clear insight into his sense of humour. This, naturally, has made him an attractive subject for writers of fiction.

The American novelist, Gore Vidal, presents a sympathetic portrait of a man driven by philosophical curiosity and a quest for intellectual coherence (which, in Vidal's view of the world, Christianity has always lacked). Vidal's "Julian" is a fictionalised autobiography in the tradition of Robert Graves and Marguerite Yourcenar, but with one significant innovation. Vidal imagines Julian's autobiography being edited, after his death, by two of his former friends, Priscus of Epirus and the rhetorician and sophist, Libanius. It is a device that allows him to introduce a good deal of humour as they send often venomous notes to one another, and also to highlight the unreliability of the historical record.

"From the example of my uncle, the Emperor Constantine ... I learned that it is dangerous to side with any party of the Galileans, for they mean to overthrow and veil those things which are truly holy ... From my cousin and predecessor, the Emperor Constantius, I learned to dissemble and disguise my true thoughts ... Yes, I was trying to imitate the style of 'Marcus Aurelius to Himself,' and I have failed. Not only because I lack his purity and goodness but because while he was able to write of the good things he learned from a good family and good friends, I must write of those bitter things I learned from a family of murderers in an age diseased by the quarrels and intolerance of a sect whose purpose it is to overthrow that civilization whose first note was struck upon blind Homer's lyre ..."

"I was admitted to all the mysteries, including the final and most secret. I saw that which is enacted, that which is shown, and that which is spoken. I saw the passion of Demeter, the descent of Persephone to the underworld, the giving of grain to man. I saw the world as it is, and the world that is to come. I lost my fear of death in the Telesterion when, in a blaze of light, I looked upon the sacred objects. It was true. More than this I cannot write. It is forbidden ..."

Priscus: "He tells altogether too much. But that was his charm ... I know that you were initiated at Eleusis and doubtless feel as much as he did about what is revealed there. I don't. ... I am cool to the mysteries, and find them vague and full of unjustified hope ... In any case, when Julian looked with adoration at that sheaf of wheat which is revealed with such solemnity ..."

Libanius: "This is absolute blasphemy! These things must not be revealed. Priscus will suffer for this in the next world, while whoever betrayed to him our high secret will sink forever in dung. It is appalling!"

Ultimately, Julian's attempt to restore "Hellenism" (in itself, something quite different from the values of the Augustan tradition) was to fail. He had proved himself an able military commander in Gaul, but was defeated and killed in a campaign against the Persians in 363. His successors restored Christianity as the religion of empire. 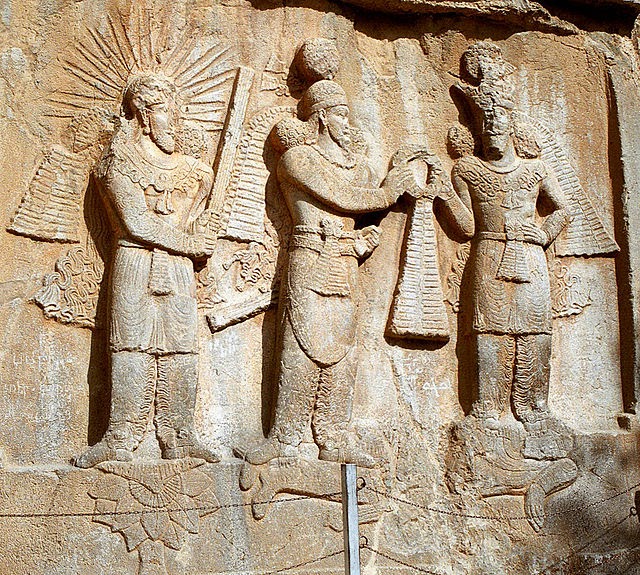 Vidal's dialogue between the now dead emperor and his friends Priscus and Libanius allow him to side-step some of the questions that have vexed historians. Was Julian killed by the Persians, or by a Christian in his own army? Did he, as some sources suggest, claim to be a reincarnation of Alexander the Great? It all depends on who we, the readers choose to believe.