I wrote about the Brigantes in my blog-post of 7th November last year, but said little specifically about their Queen, Cartimandua. She is one of only a dozen or so native Britons, alive at the time of the Roman conquest, whose name we know, and one of only two women (the other being "Boudicca," which may well be a title rather than a name).

Cartimandua ruled over a territory which included most of modern Yorkshire and Lancashire, as well as parts of the midlands. The triumphal arch of the Emperor Claudius, in Rome, records that he took the surrender of eleven native rulers in 43 AD, but does not name them. It seems likely, however, that Cartimandua, or her father, was among them. 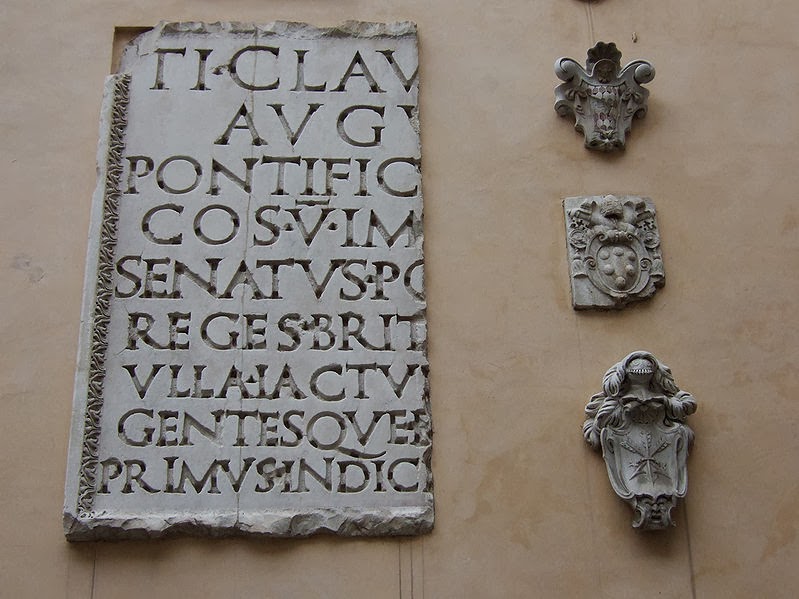 Inscription from the Arch of Claudius in the Capitoline Museum, Rome. Photo: Jenni Ahonen, licensed under GNU.

Tacitus, in his Histories, tells us that she was "ruler of the Brigantes, having the influence that belongs to high birth," and that she "came to despise her husband, Venutius, and took, as her consort, his squire, Vellocatus, whom she admitted to share the throne with her."

Tacitus was probably playing to a trope, popular in Rome since the time of Cleopatra's dangerous liaisons with Julius Caesar and Mark Antony, of an exotic and sexually lascivious queen, but his wording is significant in that it implies (as does Tacitus's use of the word Regina, which he does not use in relation to Boudicca) that Cartimandua was probably, in our terms, a "Queen Regnant," with Venutius merely a consort.

"Her house was at once shaken by this scandalous act," Tacitus continues. "Her husband was favoured by the sentiments of all the citizens; the adulterer was supported by the queen's passion for him, and by her savage spirit. So Venutius, calling in aid from outside and, at the same time, assisted by a revolt of the Brigantes themselves, put Cartimandua into an extremely dangerous position."

A situation that is portrayed as beginning with a marital infidelity seems to have developed into a full-scale civil war within Brigantian territory. Vellocatus is mentioned only once, so the likelihood is that he was killed in the course of the war. The conflict was probably more political than personal from the outset. Reading between the lines, it is clear that Cartimandua favoured cooperation with the Romans, whilst Venutius argued for violent resistance. The "aid" that he "called in" from outside is probably a reference to the Catuvellaunian prince, Caratacos, who had been leading a guerrilla campaign against the Romans based in Wales. According to Tacitus, Caractacos "sought refuge" with Cartimandua, who treacherously handed him over to the Romans. The reality may well be that Venutius drew Caratacos into a failed coup attempt.

This conflict, in 51 AD, may have opened the rift between Cartimandua and Venutius, but she clearly had enough support among the Brigantes to remain in power. Venutius mounted another attack in 57 AD but was, once again, repelled, only seizing power in 69 AD when, amid the chaos of the "Year of Four Emperors," Cartimandua's Roman allies could muster only a force large enough to evacuate her. "The throne was left to Venutius," Tacitus states, "the war to us." At that point, Cartimandua disappears from history.

When, in 1951, the eminent archaeologist, Sir Mortimer Wheeler, was given a free hand to excavate a site of his choice to celebrate the Festival of Britain, he surprised many people by choosing the Iron Age earthworks at Stanwick, near Darlington in Yorkshire. The BBC recently published archive footage of Wheeler discussing these excavations with a young Magnus Magnusson, and these can be seen here and here. 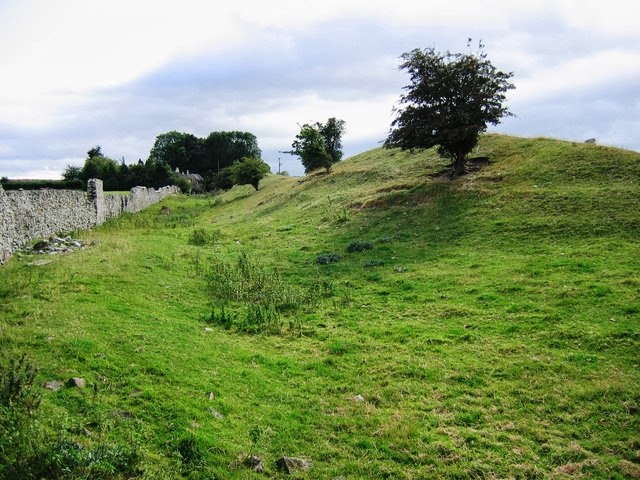 The earthworks of Stanwick. Photo: Graham Scarborough, licensed under CCA.

The site is located deep within what would have been Brigantian territory, and Wheeler found evidence for several phases of fortification during the 1st Century AD. He concluded that it was probably the stronghold of Venutius. A more recent survey, however, by Percival Turnbull and Professor Colin Haselgrove, concluded that it was more likely to have been Cartimandua's base.

Among Wheeler's most spectacular discoveries was the skull of a man who had been brutally executed with at least three sword-blows. Despite the circumstances of his death, however, his head seems to have been buried with respect, alongside an elaborate sword and scabbard. Had the head somehow been recovered by his own people and given a decent burial, like that of Sir Thomas More many centuries later? Could this, for example, be the skull of Vellocatus? Archaeologists and historians do not permit themselves such questions as this, but novelists cannot resist them! 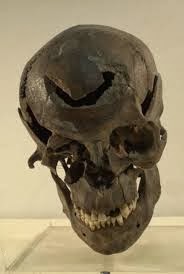 The Stanwick skull. Photo: Natural History Museum (image is in the Public Domain). 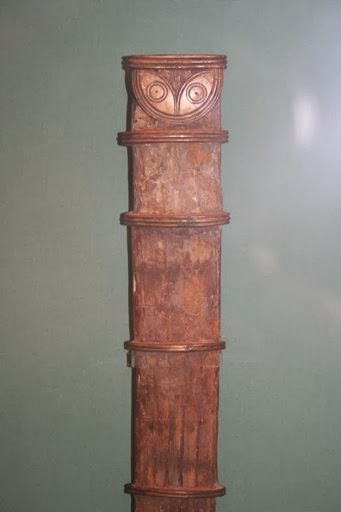 The Stanwick scabbard. Photo: British Museum (image is in the public domain).

Mark Patton's novels, Undreamed Shores and An Accidental King, are published by Crooked Cat Publications, and can be purchased from Amazon UK and Amazon USA.
Posted by Mark Patton at 11:44