The Historical Novel and the Roman World: The Genius of Robert Graves

Robert Graves's I, Claudius must have been one of the first adult historical novels I ever read. I was fourteen, I think, and had worked my way through Caesar, Tacitus and Suetonius (all in English translation - neither Latin nor Greek was taught in the schools I attended). I wasn't sure what to read next, but happened to be in the library at the same time as my headmaster, who pointed me in the direction of Graves's book. It was one of those books I couldn't put down, and I went on to read Claudius the God and Count Belisarius within the space of a few weeks.

The publication of I, Claudius in 1934 marked a distinct turning point in the development of English historical fiction. It was one of the first novels to focus on a truly remote time period and, on the basis of assiduous historical research, to present it to the reader in all its fascinating otherness. 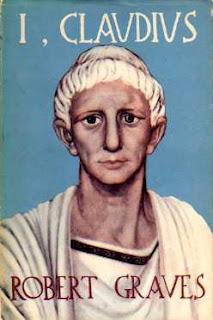 The first edition of I, Claudius.

Its first person narration (we are invited to see the 1st Century AD through the future emperor's own eyes) and vivid characterisation (Claudius himself is a more sympathetic character in Graves's hands than he probably was in reality, whilst the Empress Livia is shown as a villain to rival even Lady Macbeth) breaks down the distinction between "literary" and "popular" writing, making available, to a broad readership, a familiarity with a past that previously had been accessible only to those who had the privilege of a classical education. 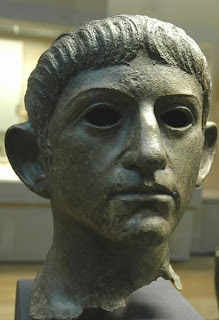 The historical Claudius (bronze statue in the British Museum).

Humour is an essential part of this characterisation. Graves's Claudius is a dry, ironic observer, prone to gossip and to speculation, an unreliable observer in a way that is very human and, consequently, engaging. He is by no means a hero but, as a guide to the machinations and insanities of the court, he is both informative and entertaining, constantly whispering asides to the reader. It is so well done that the boundaries between the fiction and the scholarship on which it is based seem to melt away. Several times, when I have been lecturing on the 1st Century AD, I have had to stop myself in mid-flow to check that I really was citing Suetonius or Tacitus, rather than Graves.

Graves seems to have had an ambiguous view of his own literary creations, saying, on the one hand, that the Emperor Claudius had appeared to him in a dream, insisting that his true story be told, and, on the other, that he had written the "Claudius" books to a tight deadline, and simply because he needed the cash. 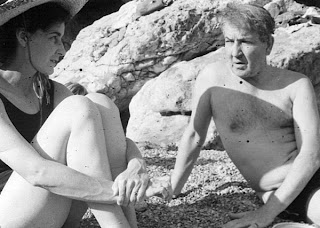 Robert Graves relaxing with the archaeologist, Jacquetta Hawkes, on Mallorca in 1950.

I suspect that he did not have to do much research in order to write the books (he had studied Classics at Oxford), and certainly they brought him commercial success, but this does not in any way diminish the quality of works which, at the time, won the James Tait Black Prize for Fiction, and which have never since been out of print.

The Claudius who will appear, rather briefly, on the pages of my own novel, An Accidental King, owes much to Graves's depiction of the emperor. However cruel and paranoid he may have been in life (and Suetonius certainly presents him as such), he could hardly have remained emperor for thirteen years if he had not been capable of appearing affable and trusting to those people (and my protagonist is one such) on whose loyalty he depended.

Indeed, this dual nature of a man raised to the status of a god is specifically explored by Graves in the second of his "Claudius" novels, Claudius the God. The gods, Graves seems to say, are inhuman and, by the end of the second novel, godlike power has dehumanised Claudius. Even as he continues with his witty asides to the reader, he is able to stand by impassively as the only true friends he has ever had are destroyed, and, ultimately, as his own destruction is plotted.

Episodes of the 1976 TV adaptation of I Claudius, starring Derek Jacobi, are currently being re-broadcast by the BBC, and at least one episode should be available on BBC I-Player.

Mark Patton's novel, An Accidental King, set in the 1st Century BC, will be published by Crooked Cat Publications later this year. His profile and notes to Graves's I, Claudius are available free of charge at www.bookdrum.com.